"We all knew Brian O'Driscoll was good, but that's when we knew he was a genius"

"The seriousness of the occasion probably hit me on that third try."

On March 19, back in 2000, Warren Gatland took his Ireland side to the Stade de France to take on a French side jammed with menacing forwards and exciting backs. Les Bleus had won the previous 13 meetings in Paris but Brian O'Driscoll chose that day, all of 20 years ago, to announce his sensational genius to the wider world.

Heading into the 2000 Six Nations championship - with Italy added to the competition for the first time - O'Driscoll admits that Ireland 'wasn't in a great spot'.

END_OF_DOCUMENT_TOKEN_TO_BE_REPLACED

Aged 20 when he made his Test debut against Australia, in June 1999, O'Driscoll recalls Ireland's winter training sessions out at Naas RFC. Even though the club provided the Irish squad with their best pitch, it still cut up badly when the weather - as it so often is during our winters - was bad.

"We had had a really disappointing 1990s and it was the beginning of that new crop of players coming through. And I think it's just about marrying the old with the new. You have to hold onto a certain amount of experience, but then bring through that new blood to be able to play with the freedom that only young people can."

Gatland and Eddie O'Sullivan, his assistant coach, were keen to give the upcoming Irish players an opportunity in the 2000 championship but they erred on the side of experience, and caution, for their opener against England at Twickenham. Clive Woodward's side annihilated  them 50-18 and made up the mind of the Irish coaching staff.

"We made a tactical switch with the Irish team," says O'Sullivan.

"We were playing Scotland next and the decision was made, let's put it that way, that we would blood in new players for that, and that we would change our strategy. I felt that we had some really good, young backs. We had O'Driscoll, we had Ronan O'Gara and Peter Stringer, who was the best passer in the world. We had people like Denis Hickie that had been around the block, Girvan Dempsey had fallen out of favour [previously] and we had Shane Horgan on the wing. I always felt we had a good, talented backline but, at that time, we had been playing a very forward-orientated game. After Twickenham, we brought some fresh faces in and said, 'Let's change it. Let's give the ball to the backs more, to get over the gainline, and let the forwards run off that'."

END_OF_DOCUMENT_TOKEN_TO_BE_REPLACED

"I started off at outside centre," Shane Horgan recalls, "and then a guy called Brian O'Driscoll came along and made things a little more tricky! So I thought I'd go to inside centre and I played 12 for a very long time. My first senior game as a wing was my first game for Ireland.

"I was lucky though [for my squad initiation] because there were four other guys on their first caps - John Hayes, Simon Easterby, Peter Stringer and Ronan O'Gara. We all got capped at the same time but there wasn't too much focus on one individual. But I do remember that we all got bought a lot of drink at the time." 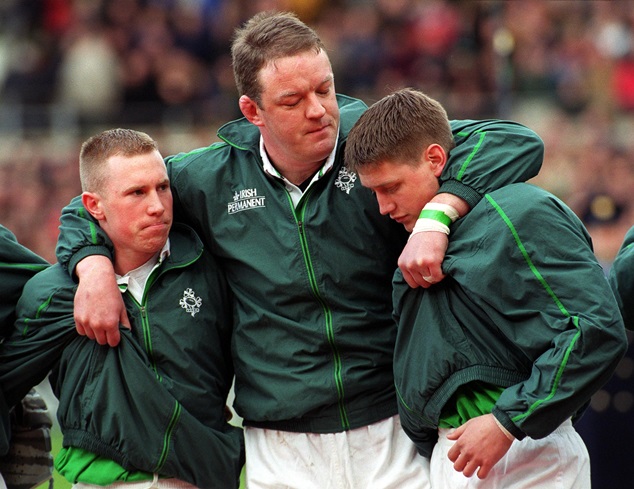 Mick Galwey and Peter Stringer and Ronan O'Gara ahead of Ireland's match with Scotland in 2000.

END_OF_DOCUMENT_TOKEN_TO_BE_REPLACED

With the new recruits settling in well, Ireland put 44 points on Scotland and 60 on the Italians. O'Driscoll and Horgan scored a try each in both of those victories but next up on the fixture list was France.

Ireland had not beaten the French in the capital since 1972 and they had won easily, on the road, against Scotland and Wales. England had beaten them 15-9 in Paris and their victory had been won by their bruising forwards, such as Dallaglio, Hill, Rowntree and Shaw, and five penalties from Jonny Wilkinson.

"Then we went to Paris and the talk was, 'Well it's France and it's away from home', and we hadn't won there since the 70s. But, on that day, we clicked again and, if you look back on it, most of the damage was initiated by the backs. And, as a consequence of that, Brian O'Driscoll got three tries."

Ireland were trailing 6-0 after 21 minutes but Keith Wood, the captain, recalled packing down for one scrum and noticing the likes of Christian Califano and Fabien Pelous breathing heavily. This was supposed to be the time when Ireland would be put away but Wood and his teammates felt the game could yet be won if they stayed in the fight and gave their backs a platform to do damage.

Ireland marched one scrum forward, just inside France's 10-metre line, and O'Driscoll made a line break before offloading to Girvan Dempsey. Strong carries from Easterby, Hickie and Anthony Foley sucked blue jerseys in and O'Driscoll finished off the attack under the posts when Malcolm O'Kelly put him away.

Credit: BBC [via YouTube]
Advertisement
France went 13-7 ahead when scrumhalf Christophe Laussucq got over for a converted try and that lead was extended three more points when Gerald Merceron lapped over a penalty.

What has been lost to time, somewhat, is the try-saving interception O'Driscoll made, on 44 minutes. O'Gara pumped a Garryowen into the French 22 but Emile N'tamack claimed majestically in the air and set off up-field. The fullback offloaded to Abdelatif Benazzi in support, who then in turn found hooker Marc del Maso.

The only thing that saved Ireland was del Maso getting the ball with 40 metres left to go. They had some catching up to do but Hickie, first, and then O'Driscoll made it back in time to prevent their side going 23-7 behind. 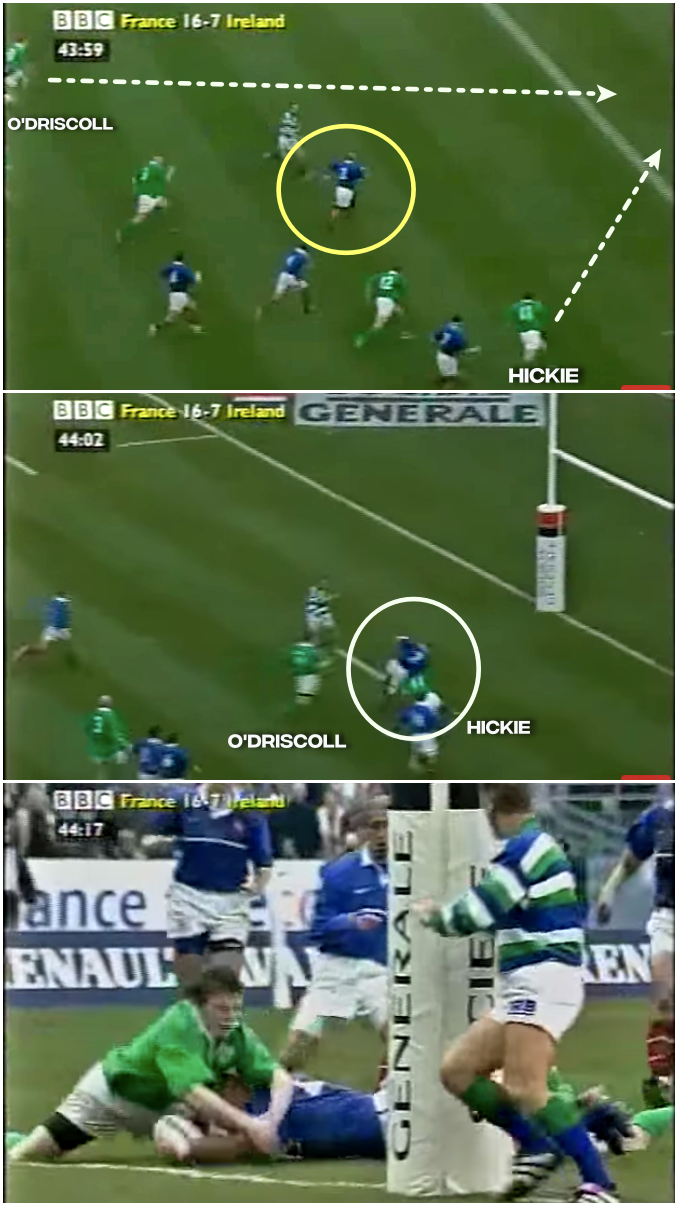 Another Merceron penalty put the hosts 19-7 clear with 25 minutes to go, but O'Driscoll was about to strike again. The Irish pack deserve a lot of credit for their role in the centre's second try. They wheeled the French scrum to take most of their forwards out of the backline dart that eventually breached them.

Stringer found O'Gara who put Rob Henderson away. The inside centre's burst resulted in another line break and O'Driscoll was in support to get the offload and skate in under the posts. O'Gara converted and it was 19-14 with 22 minutes to play.

Merceron added two more penalties and David Humphreys, now on for O'Gara, tagged three back. With 73 minutes on the clock, O'Driscoll would strike again.

"Now, the last try was a turnover where he picked [the ball] off the ground," O'Sullivan recalls. "At that stage, he probably believed he could walk on water because he got two before that. But those tries came off us really attacking France where Ireland hadn't really attacked France for a long time - out wide. The French backline, in fairness, was not a great defensive backline so it made sense to go there, but it paid great dividends."

For O'Driscoll, this is his take on what proved to be the catalyst for a remarkable victory:

"The third try is the one that stands out because it was the important one, and the one that got us back in the lead. The others were just keeping us in the hunt. I suppose I didn't pay much heed to the fact it was the hat-trick, I just knew that we were back in the game. It's not somewhere that Ireland were really used to being, on 60, 70 minutes. For the previous 25-odd years, we were usually blown away and finishing comfortably second in a two-horse race. When, of of a sudden, we were in the mix and in with a chance of doing something which we had really struggled to do for a long time. Yeah, the seriousness of the occasion probably hit me on that third try."

Credit: BBC [via YouTube]
France must have thought they had snuffed out the danger when, after another good Hickie carry, they swarmed over Peter Stringer at the breakdown. The Munster scrumhalf could not get a proper pass away but O'Driscoll pounced as the ball hit the deck.

"We all knew O'Driscoll was good," says Ronan O'Gara, "but that's when we knew the guy was a genius. He was just better than everyone else on the pitch that day. His centre of gravity and the way he was able to run with the ball, it was a great gift he had. He picking a great setting, and environment, in which to show it."

Ireland were still 25-24 behind but another busting carry drew a breakdown penalty from the French and Humphreys held his nerve to make it 27-24 with three minutes to play. Ireland had to absorb a late French rally but O'Driscoll and Humphreys combined for a turnover and the final whistle blew when Stringer cleared to touch.

That try-saving moment, some huge hits on French players and securing the turnover at the end. O'Driscoll's excellent defence was so often overlooked because he was just so electric in attack. Even at the age of 21, he was making huge plays in defence.

Watching that game back home, the day after helping Wales to a 26-18 over Scotland, was Gareth Thomas, who would go on to tour New Zealand with O'Driscoll and the British & Irish Lions.

"I remember watching that game against France and seeing him running in that hat-trick of tries, and thinking, 'Jesus Christ, this guy is for real'. Either he was very young back then or he's aged an awful lot! He was so fresh-faced back then; looked so young. He always had that talent and potential and sometimes there are a lot of guys that look great when they first come on the scene.

"But what makes Brian even more impressive was that he was able to retain that talent and potential over the years. Many of the true greats can do it consistently over the years, even though you have all these opposition players and coaches looking at how you do it, and trying to figure out how to stop you. I felt Brian got better as he got older. He was consistently good and he consistently got better." 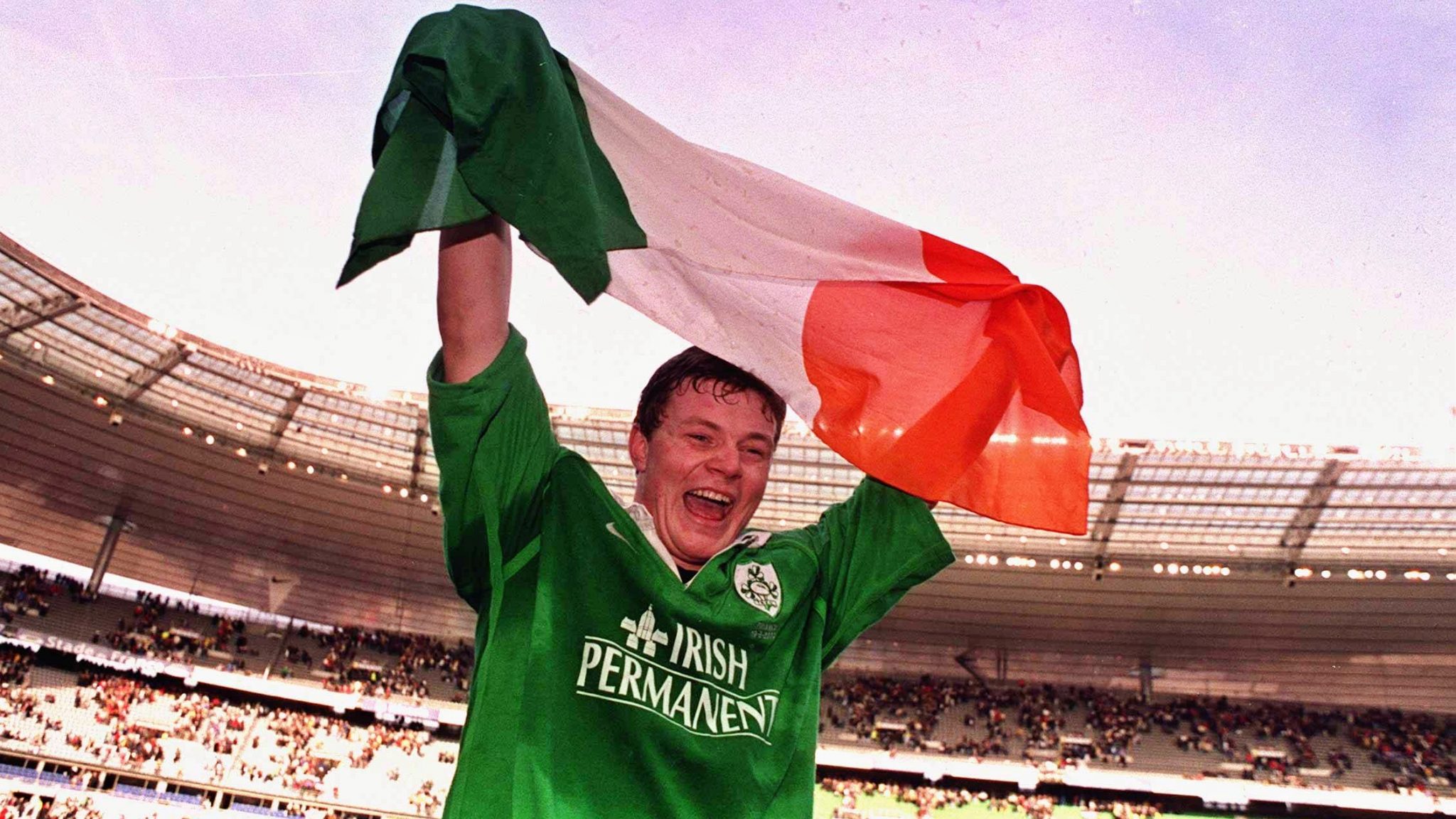 Brian O'Driscoll is held aloft by Irish teammates after his Paris heroics. (Sportsfile)

"That really set us on the road to playing a bit more with the ball away from home," O'Sullivan comments.

"Brian O'Driscoll really broke on the scene, that day. He had the potential but you probably need a day like that to announce yourself. And when you think about it, the following year he was the star of the Lions Tour [to Australia] so it really ignited his career.

"He became, and still is, an iconic figure in Irish rugby, and around the world."