"Apologies to anyone that might have heard that, over the ref mic."

Ahead of Ireland's first home tilt against South Africa in five years, Stephen Ferris set the scene about a man he knew would have a big say in matters - Peter O'Mahony.

The former Ulster, Ireland and Lions flanker crossed paths with O'Mahony before injury cut short his own excellent career. As a guy that has trained and played with the Cork native, and tracked his progress over the past few years, Ferris is so impressed with his consistent levels. And how he consistently gets in faces.

"You might as well write Peter O'Mahony off for every week," Ferris told us, "because he's going to come back firing his own shots. And how he does that is by playing really well.

"I don't know what it is - when he plays for Munster, he's always very good, but when he plays for Ireland, he's bloody brilliant. He's really, really good. You can arguably say that he, and Josh van der Flier, have been the best two out of that back row unit they have now."

And so we had 33-year-old Peter O'Mahony getting named in an Ireland back row for another huge Test match. Again, folks questioned why he was there.

More fuel for the fire. More logs to burn up. 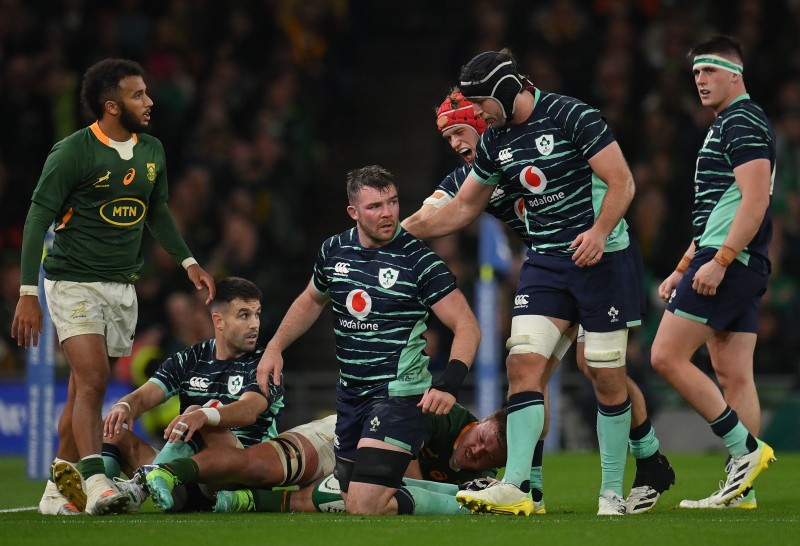 END_OF_DOCUMENT_TOKEN_TO_BE_REPLACED

Against a fired-up South Africa, Peter O'Mahony was throwing himself about, and chirping loudly, from the get-go.

In terms of his performance, it was typical O'Mahony - a healthy amount of carries into traffic for decent, but not significant metres, peerless in the lineout, dogged on the ground, sticking eight tackles and winning his side two turnovers.

END_OF_DOCUMENT_TOKEN_TO_BE_REPLACED

He was the emotional barometer of how Ireland were faring - if his blood was up and he was chawing away, the home side were landing blows.

He got into it with Jasper Wiese, Jesse Kriel and Makazole Mapimpi, at different stages. There were stare-downs, cat-calls, pointed barbs and straight up foul language - anything to try get under the Springboks' skin.

At one stage, when Ireland one a first half penalty inside their 22, O'Mahony had a big grin on his face. When a South African player complained with the call, the blindside was picked up on the ref mic telling him to 'Go **** yourself'.

"Apologies," interjected David McIntyre, on Virgin Media, "to anyone that might have heard that, over the ref mic."

#IrishRugby 6 - 3 #Springboks 40mins It's another Bok 22 lineout & this time they keep possession, attempting to barge over the 22, advantage being played and the whistle goes. Peter O'Mahony can't help but try to start a fight 🙄 #AutumnNationsSeries #IREvRSA 🇮🇪🏉🇿🇦 #Rugby

It was the Sam Cane treatment, packaged and tied with a fresh bow for the South Africans.

Of course, Peter O'Mahony would not be the player he is, and he would not have received the send-off he did, late in the game, if he was all bark and no bite.

For 68 minutes, he was a splinter under the Springbok's nail that they could not pick out.

He will be 34 when the World Cup rolls around, next year. The same voices, and maybe a few more, will be writing him off and wondering why Ireland need such a dog in their back row.

As Stephen Ferris says, the doubters can doubt. This man just keeps delivering in a side that have won 15 of their last 17 Tests and are deservedly top of the world rankings.


popular
"Every team did it!" - Paul O'Connell on Roy Keane comment to Ronan O'Gara that he couldn't deny
Five confirmed changes and guidelines to have big impact on 2023 Six Nations
"It's crazy to think Bundee Aki might come straight in and start against Wales"
CCCC order replay of All-Ireland club football final
Everton release brutal 59-word statement to confirm Anthony Gordon departure
Owen Farrell praises Johnny Sexton in revealing interview ahead of Six Nations
Shane Lowry confirms amicable split from caddie after four and a half year partnership
You may also like
2 days ago
Two Ireland stars included in Premier League's 'young English XI'
2 days ago
British publication urges Gareth Southgate to claim Evan Ferguson for England
6 days ago
"He didn't give me that jersey back!" - Johnny Sexton on new rival Jack Crowley
6 days ago
Johnny Sexton on Six Nations documentary, and two Ireland players Netflix should follow
1 week ago
Liverpool reportedly selling Caoimhin Kelleher for Jude Bellingham funds
1 week ago
Robbie Henshaw on his life-long friendship with Bundee Aki and Netflix documentaries
Next Page