"They've come and achieved something pretty special here and I think they deserve a bit of time in the sun for that."

New Zealand head coach Ian Foster was asked, on three separate occasions, if he was considering his position.

His All Blacks side had just lost 32-22 to Ireland. New Zealand won the First Test in Auckland but lost the next two games, in Dunedin and Wellington, as Ireland snatched the series away.

Following the game, Foster said his would only talk about what had transpired on the pitch, and not discuss his future. He also had a message for New Zealand rugby fans as they looked back on the series as a whole.

"First and foremost, I think New Zealanders have probably got to realise this is a very good Irish team and give them some credit. It would be disrespectful for us to not make that the number one item."

On the subject of disrespect, one would have assumed, from seeing how poorly so many All Blacks rated, that the men in black had just lost a series to a touring pub side. 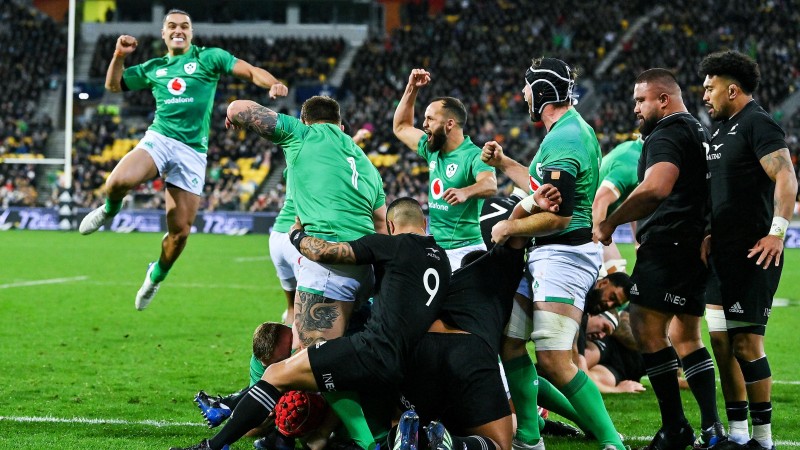 END_OF_DOCUMENT_TOKEN_TO_BE_REPLACED

Looking at the ratings from reporters that routinely cover the All Blacks, there is no mercy for a side that have now lost four of their last five Test matches.

In Stuff, Paul Cully doled out three ratings of 3/10, with Codie Taylor and Nepo Laulala both getting 2/10. Both Barretts in the starting XV, Jordie and Beauden, scored 3/10. Cully wrote that Beauden Barrett had been 'firmly in Johnny Sexton's shadow for the last two Tests'. On New Zealand captain Sam Cane [3/10], he wrote:

'Has been second best to Ireland No 7 Josh van der Flier throughout the series. Replaced by Dalton Papalii with about 17 minutes to go and questions about his captaincy will only increase.'

END_OF_DOCUMENT_TOKEN_TO_BE_REPLACED

The top rated ABs star, for Cully, was Ardie Savea (7/10) while Akira Ioane got 6/10. No other player from the match-day squad got higher than 5.

Over on Rugby365, Sam Smith was equally cutting of the beaten All Blacks. Nepo Laulala and Sevu Reece were both hit with 3/10 ratings. On Codie Taylor, who got 3.5 out of 10, Smith wrote:

'Was better around the park than last week but still looks a shadow of his former self. The All Blacks also seriously struggled at lineout time, with Ireland sniffling four of Taylor’s 12 deliveries.'

Ardie Savea was Smith's top-rated player, on 8/10, with Akira Ioane getting 7 and both Will Jordan and Sam Whitelock getting 6.5.

To our mind, though, such ratings brush right by how impressive this Ireland side was, and how improved New Zealand were on their Dunedin showing.

Sure, some underperformed while others were merely passable. Ratings as low as 2 and 3 would suggest these All Blacks had certifiable stinkers, despite rallying from 19 down to within one point, had Jordie Barrett landed his 60th minute conversion.

It would be fairer to say that Ireland are the better of two top-class sides, right now, and their players were successful in imposing themselves on the three-time world champions.


popular
“Players flourished when Roy Keane left” - Rio Ferdinand on why Keane was a 'detriment' to Man United
Man United considering loan move for Christian Pulisic
"To be able to call myself the fastest man in Irish history is just amazing" - Olatunde overjoyed after record-breaking run
The FootballJOE Pub Quiz: Week 50
Specsavers troll former Liverpool star for Darwin Nunez headbutt claim
Wexford, Waterford and Kilkenny down some good men as Australia calls
The moment Israel Olatunde realised he qualified for the Euro 100m final is what it's all about
You may also like
2 weeks ago
“My confidence was on the deck" - Aaron Connolly explains why he has made the move to Italy
2 weeks ago
Every Irish transfer in football, this summer, as several big deals get done
3 weeks ago
Six Irish players make damn impressive 'World XV' that would take some beating
3 weeks ago
The frontrunners for Ireland's 33-man squad for the 2023 World Cup
4 weeks ago
All Blacks media manager explains why Ian Foster appearance was cancelled after Ireland defeat
4 weeks ago
Warren Gatland selects nine Irish players in his strongest Lions XV, right now
Next Page