"It was so casual, but so clinical."

In the United Rugby Championship, one of the best teams to watch right now are Edinburgh. The Scots may be leading the league right now, but it is their style of play that is so appealing.

With Mike Blair in as head coach, taking over from Richard Cockerill, Edinburgh are putting the ball through more hands and having more cuts at the opposition. They have won six of their eight URC games, drew another and beat a strong Saracens side away from home in the Challenge Cup.

END_OF_DOCUMENT_TOKEN_TO_BE_REPLACED

"I'm putting a layer on top of our game, giving the players more authority and giving them a bit more freedom," Blair told BBC Radio Scotland after their weekend win over Cardiff. "There are some really talented players in there."

On the latest House of Rugby URC, [LISTEN from 35:30], former Munster men Greg O'Shea and Ian Keatley discussed Edinburgh's rising tide and a try-scoring move that had them both raving. 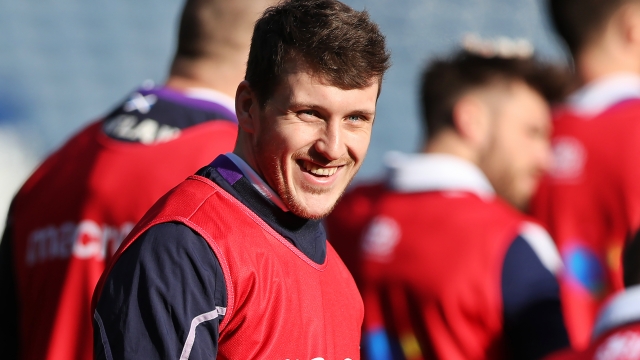 Mark Bennet pictured at a Captain's Run for Scotland in 2017. (Photo by Ian MacNicol/Getty Images)

END_OF_DOCUMENT_TOKEN_TO_BE_REPLACED

Edinburgh centre Mark Bennett raced in two tries against Cardiff, made another and gained 156 metres off 12 carries. If you had him in your fantasy URC team, a firm tip of the hat.

The former Sevens flyer teamed up well with midfield partner James Lang, and got everyone's attention with a superb solo effort for the Scots' final try of a 34-10 victory.

An absolute cracker from Mark Bennett of @EdinburghRugby at the weekend

"It's actually what I'm teaching a lot of the younger guys coming through - the show and go," says Keatley.

"It's probably the best move in rugby at the moment. If you can show, go, then you can create space for yourself - go through a hole - without even having to pass the pass.

"It is definitely an underused move from a lot of young guys, but it is definitely coming into the game a lot more. In training, we're calling it 'The Pump' and it's just 2 vs. 1 drills. Practising, practising and just trying to get a reaction from the defender.

"It helps either create space for yourself or, if not, definitely draws the defender much closer and makes space for someone else. It's a big skill work-on that is, as I said, probably the best move in the game. You don't even have to make a pass, yet you can make space and score tries, as we saw there."

Bennett has 22 Test caps for Scotland but has not played for his country since 2017. He has shot his arm up for Gregor Townsend before the 2022 Six Nations.

In truth, all of Edinburgh's five tries against Cardiff could have featured in the House of Rugby URC 'Try of the Week' collection, but Bennett's second was eclipsed by this lovely team move that was finished off by Argentinean winger Emiliano Boffelli.

A faked box-kick, Mark Bennett through the gap and a try assist slung to Boffelli at full pace.

Edinburgh are certainly worth the watch this season.

You may also like
6 days ago
"Everything’s done for you" - Eddie Jones on how private schools influence English rugby
1 week ago
Faf de Klerk knocked out after horror collision with knee of All Blacks winger Caleb Clarke
1 week ago
"We'll support him in any way we can" - Wallabies captain Michael Hooper backed for brave mental health decision
1 week ago
At a time when rugby needs genuine characters, Naitoa Ah Kuoi could not have timed it better
2 weeks ago
Eight Ireland players make final cut in 'World Class' 33-man squad selection
2 weeks ago
"There's no magic wand. A lot of it starts and finishes with hard work" - Ronan O'Gara
Next Page