One crucial change but Lions team picks itself

Barring any late schedule changes, the Lions team to face New Zealand will be named at 8pm on Wednesday [GMT].

Warren Gatland will name his matchday squad for the biggest British & Irish Lions game in the past 20 years early on Thursday morning [New Zealand time] and he has a couple of big calls to make.

The tourists may have ended the All Blacks 2,849-day unbeaten streak at home with their tense victory in Wellington but doing it all over again at Eden Park will be a mammoth task. Many Lions stars performed well at 'The Cake Tin' but the fact remains, they were lucky to be only 18-9 down, against 14 Kiwis, after 59 minutes.

END_OF_DOCUMENT_TOKEN_TO_BE_REPLACED

The Lions have now given away 24 penalties in two Tests and assistant coach Graeme Rowntree told reporters that the coaching staff would not hesitate to bench a player if they felt their discipline had broken down without hope of repair.

An Englishman and Irishman top the Lions' list of penalty culprits and many are calling on Jack McGrath to come into the starting XV to right one of those wrongs.

He has to start https://t.co/fajCO9WxKh

END_OF_DOCUMENT_TOKEN_TO_BE_REPLACED

Sean O'Brien is the Lions' worst offender - giving up five penalties around the breakdown - with Mako Vunipola's four all coming in a poor personal performance against the All Blacks in the Second Test.

O'Brien has been the Lions' best forward, and arguably their best player, in the opening two Tests and he is unlikely to have the No.7 jersey wrested from his grip.

Vunipola was in great form coming into the Test Series but he was ineffective in Auckland and reckless in Wellington. In our player ratings for both games, he has received 5/10 and 2/10.

McGrath is renowned as the better scrummager of the two but Vunipola has not brought his best asset - ball-carrying - to the party. The Lions scrum has wobbled, too, and Gatland may be open to getting McGrath in from the start and unleashing Vunipola as an impact sub.

END_OF_DOCUMENT_TOKEN_TO_BE_REPLACED

Elsewhere, Johnny Sexton and Owen Farrell are set to continue in their 10/12 partnership that can only get better after their 80 minutes together last Saturday. As the 14 men of New Zealand wilted, late in the game, the duo came to the fore with smart passing and running lines.

The only other big decision to make is whether Courtney Lawes gets the start ahead of Alun Wyn Jones after the English lock's excellent impact off the bench last week. We suspect Lawes will be held in reserve again. 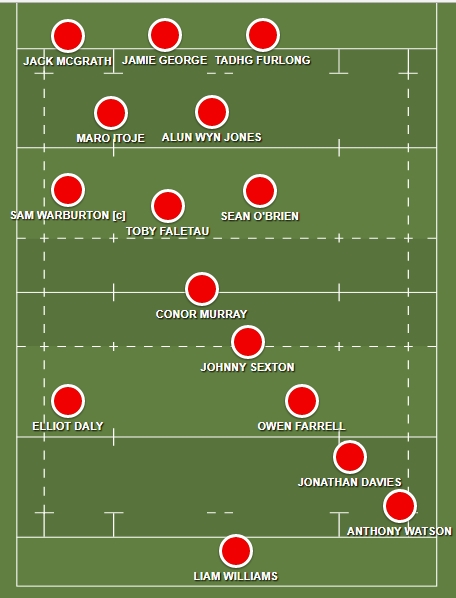 Five Ireland players in the starting XV with an absolutely massive game on the line?

We wouldn't have it any other way.


popular
Andy Farrell goes for Munster veterans as Ireland team to face New Zealand named
The four stone-cold certainties for All-Stars even as early as this
Eamon McGee just couldn't help himself with Armagh-melee tweet
"He's actually smiling putting the ball over the bar. He should nearly be fainting." - Ryall on Limerick's legacy
Kylian Mbappe reportedly wants PSG to sell Neymar
Gavin Coombes one of four Irish players to push themselves into Test picture
"The economy was one of the big reasons" - Cadogan's move from an electrician to personal training
You may also like
20 hours ago
Gavin Coombes one of four Irish players to push themselves into Test picture
22 hours ago
Full Ireland player ratings after Maori All Blacks teach us an early lesson
1 day ago
"We could lose all five games" - Darren Cave with a rare take on Ireland's chances
1 day ago
Mike Lowry and Peter O'Mahony in First Test contention as Ireland shuffle deck
2 days ago
"Significant" knee injury ends Iain Henderson's tour of New Zealand
2 days ago
Ireland include plenty of new faces in team to face Maori All Blacks
Next Page