"You know I love you, Seanie, but I had to go for David Pocock. And I know that's going to hurt you!"

Paul O'Connell may not look back too fondly, these days, on his 'Fear of God' dressing room speech, but Kyle Sinckler cannot get enough.

The Harlequins, England and Lions prop was a guest of Sean O'Brien and Alex Goode, on the latest House of Rugby, this week, and was asked to select his dream rugby pack, as well as a scrumhalf to guide them around.

END_OF_DOCUMENT_TOKEN_TO_BE_REPLACED

Sinckler's toughest choices were at openside flanker and in the second row but while one Irishman made the cut, O'Brien missed out to the breakdown beast, David Pocock.

With Springboks legend Bakkies Botha a nailed-on selection for second row, Sinckler was left with a choice between O'Connell and England's World Cup-winning captain, Martin Johnson. After siding with the Munster man [LISTEN from 32:15 below] he shared his full pack and explained why he loves O'Connell. 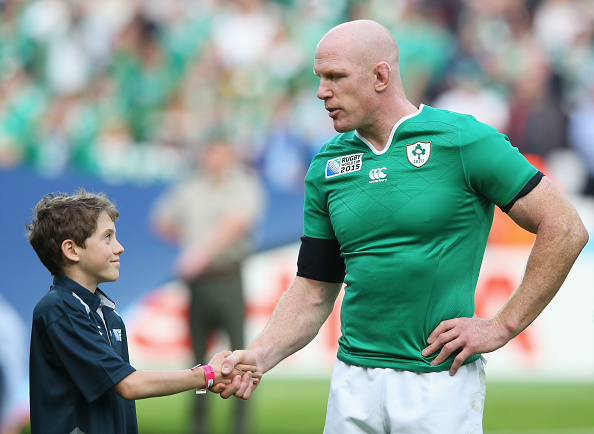 Paul O'Connell of Ireland shakes hands with a mascot, at the 2015 Rugby World Cup. (Photo by David Rogers/Getty Images)

END_OF_DOCUMENT_TOKEN_TO_BE_REPLACED

In selecting his 'Ultimate Pack', Kyle Sinckler started off with an Argentinean loosehead prop that made a mark in the Premiership, too, with Leicester Tigers - Marcos Ayerza. "One of the best scrummaging props ever," he declared. "Unbelievable technician."

Hooker is "chunky" French legend William Servat while All Blacks star Carl Hayman, who played in Europe with Newcastle and Toulon, gets the tighthead spot. When it came to his second row, Sinckler said:

"I always liked a traditional right-hand lock that is just a lump, so I've gone for Bakkies Botha. He's going to hit the rucks and do all the grunt-work.

"The second spot is a tough one. It's a toss-up between Paul O'Connell and Martin Johnson. I honestly can't pick it. I've probably watched every single speech, that's online, of Paul O'Connell. He's got an aura about him. Same with Martin Johnson... I like the way Paulie runs a lineout. He's probably a better lineout operator than Martin, so we'll bring Martin off the bench for 30 minutes. Just to cause havoc!"

As for the scrumhalf to marshall that pack around and let them cook when they are feeling it, Sinckler went for Harlequins and England teammate Danny Care.

"I'm a loyal guy," he said, "and I've got to go with DC, Danny Care. The guy is an absolute genius... I love playing with him as he knows how to gert his forwards into the game."