Monday afternoon will see the confirmation that Ireland enter the 2019 World Cup as the number one side in the rankings.

Ireland rankings are looking up.

The rankings will be officially updated to tally up Ireland's win over Wales that gives them 0.61 extra points. That sees them leapfrog New Zealand to World No.1 - 89.47 to the All Blacks' 89.40 points. 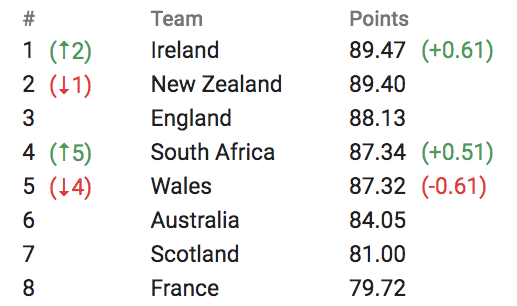 Steve Hansen's men put a 92-7 beating on Tonga, on Saturday, to go into the tournament in try-scoring form. The Kiwis have held the Webb Ellis trophy since 2011 and Ireland boss Joe Schmidt certainly feels they are the side to beat.

"I didn't even realise we were [World No.1] until I did an interview after the game and was told about it."

He added, "It's a label, it's a nice label to get...but it's not relevant to us. We all know who the favourites are."

Looking at the latest odds, following all the World Cup warm-ups, Ireland are fourth favourites to win in Japan. New Zealand are clear favourites, followed by England and South Africa with Wales around 7/1 or 8/1, depending on where you look.

The rankings update was not on Schmidt's radar, he insisted, but it is a fitting way for the Kiwi to bow out. Today's 19-10 win over Wales was Schmidt's 33rd he has overseen at the Aviva Stadium since he took over here in 2013.

Since he stepped into the role vacated by Declan Kidney [with Les Kiss as interim for the 2013 North American tour], Schmidt has led Ireland to a series of historic victories. New Zealand have been hobbled twice, there have been tour wins in Argentina and Australia and a first ever Test win against the Springboks, in South Africa. There has also been the matter of three Six Nations titles, including the 2018 Grand Slam.

What will please Schmidt most about today's victory was that Ireland looked as good as they did in 2018 when they ended that calendar year the best team in the world by every regard but the rankings.