Kiwi view: 'We are still, game in, game out, the best side in the world'

New Zealand television and radio broadcaster Mike Hosking has called on New Zealanders not to panic with the All Blacks latest loss and insists that the world champions are still the best team in world rugby.

All Blacks head coach Steve Hansen conceded that Ireland were now the 'best team' in the world following the game with Joe Schmidt's side now winning two of their last three games against the two-time defending world champions.

The New Zealand view has largely been congratulatory to Ireland with Radio New Zealand's Jamie Wall noting that the All Blacks were "out-thought, out-played and out-done" while Gregor Paul, writing for The New Zealand Herald, praised Ireland's bravery and creativity, but Hosking insists that New Zealand are still the team to beat in world rugby.

Writing in the Herald, Hosking noted:

"No one likes to see the All Blacks lose - but if you're going to lose, one: you want to lose in a game to remember.

"Two: You want to lose to a side that most would argue were the better team.

"Three: You want to lose to a side that were seen as genuine respectable contenders going in.

"Four: You want to lose to a side that represents a region that is closing what has been regarded as a chasm, in terms of talent.

"Five: You want to lose because globally it's good for the game, especially going into a World Cup year."

He continued:"So for the All Blacks let's be sensible about this. No it's not the way you want to end the year, and no, two losses isn't a great season.

But we are still, game in, game out, the best side in the world. I'd still back us to win the World Cup.

And I would not be, beyond the bounds of some regular retrospective investigation as to what we need to work on to improve, remotely worried about next year." 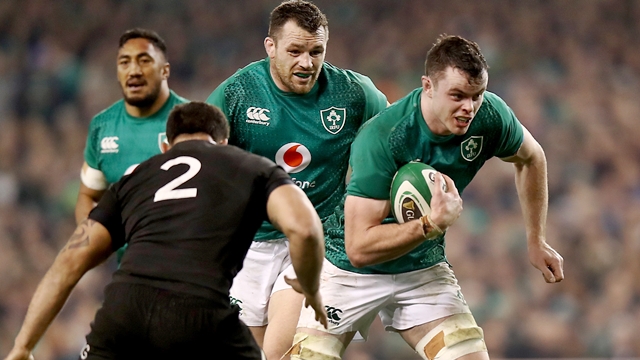 Paul Cully of Stuff also singled out Ireland second-row James Ryan for huge praise and noted that former World Player of the Year Brodie Retallick now has a rival for the right to be called the best lock in world rugby.

"The giant has been felled - quite literally in the 13th minute when James Ryan and Devin Toner combined to smack Retallick back two metres. Ryan was superb. He carried relentlessly, suggesting his engine is equal to Retallick's V8, and it was fitting that the final mistake came from a weary Retallick.


popular
Red cards, slips, heroes, villains and last second equalisers - Derrygonnelly's extra time win over Dromore had it all
GAA club transfers that shocked the county: Jason Sherlock
Fermanagh footballer opens up about losing her mum to suicide and urges people to seek counselling
Here's all the GAA games on the tube this weekend as the provincial championship heats up
Ruesha Littlejohn gate-crashes Katie McCabe's interview after another player-of-the-match display
Jordan Larmour enjoys satisfying bit of revenge on Mack Hansen
Frank Lampard admits he 'felt terrible' over comments he made about Paul Pogba
You may also like
2 days ago
Ronan Kelleher had his priorities straight after Ireland beat the All Blacks
1 week ago
"I've had stick my whole career" - Mike McCarthy on 'Plastic Paddy' jibes and singing the anthem
1 week ago
"Just brilliant" - Alex Goode backs Caelan Doris for 'Best Player' award
1 week ago
Sean O'Brien praises "unbelievable" Robbie Henshaw after his winning return
1 week ago
Four Ireland stars voted onto Autumn Nations Series 'Best XV'
1 week ago
Sean O'Brien on rugby league star he'd love to get in a boxing ring against
Next Page