Ultimately, the ceiling potential of Joe McCarthy sees him miss out.

For Kieran Treadwell, today's Ireland Six Nations squad announcement is a matter of the right player but at the wrong time.

With Ultan Dillane announcing, early last season, that he was heading to La Rochelle, it was effectively the end of the Connacht lock's international career. Dillane won the last of his 19 Ireland caps in July 2021, against Japan.

END_OF_DOCUMENT_TOKEN_TO_BE_REPLACED

Ryan Baird was on the scene by then, but Dillane was that ballast second row option that could get about the park swifter than the likes of Jean Kleyn or Ross Molony. As soon as it was known that he was off to France, that was him done with Ireland. There was a conversation with Andy Farrell but Dillane accepted that it would be a case of 'out of sight, out of mind'.

Farrell turned to Baird but both he and Paul O'Connell see the Leinster forward more as a blindside option. For the New Zealand tour, they turned to Kieran Treadwell. The Ulster lock went from tourist to Test squad member when Iain Henderson flew home early. Right man at the right time.

Treadwell got in for the Test series against the All Blacks as Andy Farrell opted for him over Baird. The 27-year-old returned the favour with big contributions off the bench in all all three Tests, as Ireland won the series 2-1.

Joey Carbery will be feeling miffed by the falling axe but he must have sensed the writing was on the wall, in New Zealand, when he got seven and five minutes in the final two Tests. Treadwell did all that was asked of him in five Test matches after his recall but is staying with Ulster while Ireland plot for games against Wales and France. 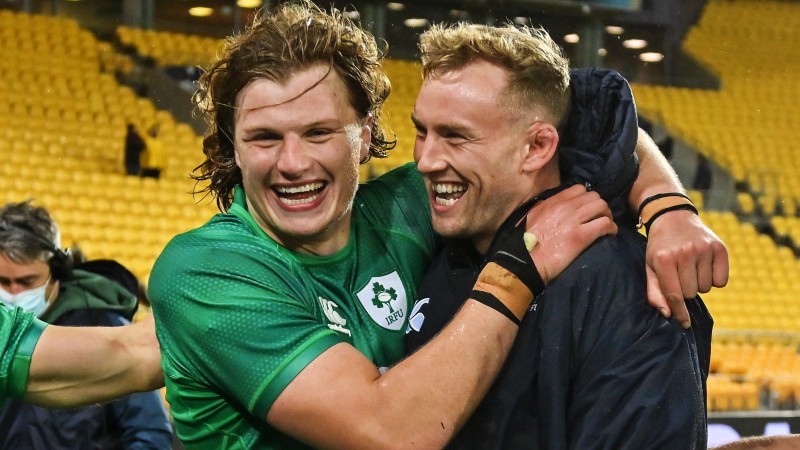 Ireland players Cian Prendergast, left, and Kieran Treadwell celebrate after a win over the Maori All Blacks. (Photo by Brendan Moran/Sportsfile)

In the Bank of Ireland Nations Series, last November, Kieran Treadwell played 20 minutes off the bench and then started the win over a Fijian side that were beset by poor discipline and cards.

END_OF_DOCUMENT_TOKEN_TO_BE_REPLACED

Having, from the outside looking in, proved to Andy Farrell and the Ireland coaches that he was a man that could be counted on, Treadwell will have been gutted at missing out on today's squad.

It is not so much anything Treadwell himself has done wrong - although winning only one of eight Ulster appearances this season will not have helped - it is a Leinster man kicking on at the right time.

Peter O'Reilly, in The Sunday Times, told a good story when giving some background to the man that has displaced Treadwell in the Ireland squad. When he brought his squad tonPortugal for some warm-weather training, last January, the coaches were watching in a bar as Cardiff inflicted a rare URC defeat on Leinster.

It was Joe McCarthy that grabbed the attention of Farrell. Watching the 6-foot-6 lock make a bruising carry into contact, Farrell was said to have looked around and asked, 'Oo's the big lad?'

That was it. McCarthy was on the radar. Farrell was convinced the Ireland second row, aside from the likes of Henderson, James Ryan and Tadhg Beirne, needed a big unit. An enforcer.

So it transpired that McCarthy also made the New Zealand tour. He looked raw in his outings against the Maori All Blacks but, like most that featured in those games, much better in the second hit-out.

The game that clinched McCarthy's place in the 2023 Six Nations squad was the last game he has played this season. On December 26, down at Thomond Park, the 21-year-old delivered his best game in professional rugby.

He looked right at home in an 80-minute performance against Munster and hinted at just what his ceiling could be. Farrell was watching on.

Treadwell can justifiably feel hard done-by but that Munster game, and the raw potential of the lad, is what makes McCarthy the right man for this time.


popular
Man United could be blocked from playing in the Champions League next season
French media's opinion of this Ireland team becomes clear as vital clash nears
Man United vs Leeds: Why the game won't be shown on Irish TV
Ireland team vs. France: Form players rewarded and a welcome return
Eight players to watch in tonight's Sigerson Cup semi-finals
Clive Woodward happy to 'eat humble pie' after bold comments about Ireland
Peter O'Mahony reaction to Liam Williams scuffle shows he may finally be mellowing
You may also like
1 day ago
Josh van der Flier's post-match recovery routine could spark a bracing trend
1 day ago
Clive Woodward happy to 'eat humble pie' after bold comments about Ireland
2 days ago
The Ireland team Andy Farrell needs to start when France come to town
3 days ago
Matt Williams wants two changes and Peter O'Mahony benched for Ireland vs. France
3 days ago
Warren Gatland says Andrew Porter needs 'kick up backside' after flashpoint tackle
3 days ago
"Remember that name" - Sonny Bill Williams raves about Ireland U20 star after outrageous try assist
Next Page