Loved in Limerick, loved in Munster but Keith Earls always having to "re-prove himself"

"Poor Earlsie nearly lost a hamstring, picking the ball off his boots!"

Friday night at Kingspan Stadium saw Munster send a message to those that say they are too stolid in attack. They went offload crazy against Ulster, and create a two-on-one with Chris Farrell and Keith Earls in full flight.

Farrell was looking to stick covering fullback Stewart Moore, so he deliberately dallied over his pass before connecting with Earls. When the pass came, Earls had to stoop, but he got control and dotted down for his 61st Munster try.

Munster coming to a boil at the right time 🔴 pic.twitter.com/Afe9TFnviR

END_OF_DOCUMENT_TOKEN_TO_BE_REPLACED

With 61 tries for Munster and 34 for Ireland, Keith Earls is second top try-scorer for his province and country. The lads ahead of him, Simon Zebo and Brian O'Driscoll, were not bad finishers themselves. Zebo is nine and counting this season and has previously joked that the big reason for returning from Racing 92 was to keep ahead of the Moyross native.

That Ulster try was just Earls' second in Munster red this season, from nine games, but he has had another solid season. He has covered both wings and played outside centre and has primarily featured in Europe and in the inter-pros.

On the latest House of Rugby URC [LISTEN from 14:40 below], Greg O'Shea, Jason Hennessy and Darren Cave looked into the impact Earls is having in this, his 15th season with Munster. 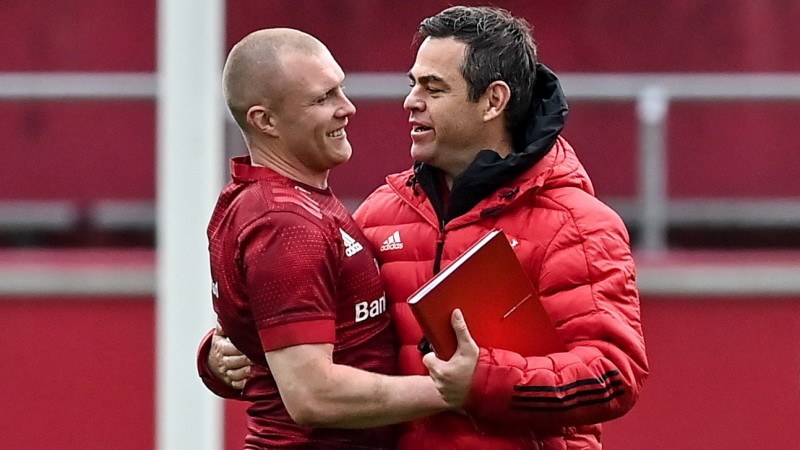 "It annoys me so much when people try and write off Keith Earls," declared Jason Hennessy. "They were trying to write him off again after the Six Nations, saying he was finished.

"A lot of Munster fans and Limerick people, I know, were writing him off. If it wasn't for that tackle in the first leg, against Exeter, I don't think Munster would be in the quarter final of the Champions Cup. I really don't, it was that important.

"It was also huge, how well he played in that game, and in the second leg. Keith Earls ain't finished yet."

Olly Woodburn looked to be clean through after a swift move finds him wide, but the @Munsterrugby men chase him down and force a crucial nock-on 👊#HeinekenChampionsCup pic.twitter.com/bLLxBMpYQ4

'He can still move now'

"I sometimes wondered if I was a little biased, because I'm the same age as him," said Darren Cave. "I'm mid 30s, and I've probably known him half my life. He's such a nice guy.

"There's actually not that many players I can think of - Rob Kearney is another one - who have had to consistently re-prove himself. I felt like that's been the way, the whole way through Keith's career.

"There will be people listening to this show that will be saying, 'Well, I don't rate Keith Earls'. I'm telling you, I've played with him, trained with him, played against him. He's an unbelievable rugby player. He is electric. He's so quick, so intelligent, he's physical, he can kick well, get up in the air. He's a really good leader. He's just a brilliant player. But he gets a lot of shit, doesn't he?"

Hennessy and Greg O'Shea noted how Earls is 'loved in Limerick, loved in Munster' but not often rated as highly as he could be by supporters from rival provinces, and nations.

"I was in the academy for four years, with Munster," said O'Shea, "and I learned so much off him. He'd bring me off to the side and teach me these agility drills. Such a nice guy and always so welcoming.

"When he was younger, he was faster than everyone else, and he can still move now."


popular
Iran demand action by FIFA after USA team change flag on social media
World Cup 2022 Day Nine: All the major action and talking points
"I appreciate Moycullen now more than ever" - Cooke's American lifestyle from a Moycullen base
Roy Keane's issue with Argentina star could rival Graeme Souness and Paul Pogba
GAA JOE Team of the weekend
Roy Keane makes quip about Declan Rice and Jack Grealish after England lose player to Germany
'I was so stressed the week before the All-Ireland and I ended up having a panic-attack' - O'Shea and O'Sullivan open up
You may also like
1 week ago
"Two Irish players are best in the world" - Rugby reacts to big Josh van der Flier and Terry Kennedy awards
1 week ago
Two baffling omissions as four Ireland stars make World Rugby 'Dream Team' of the Year
1 week ago
Josh van der Flier claims World Rugby Player of the Year at Monaco ceremony
1 week ago
"Highlight of my Ireland career" - Behind the scenes as Jack Crowley and Ross Byrne covered for a legend
1 week ago
Bundee Aki reminded us all of his best qualities, on a night Ireland couldn't do without him
1 week ago
Peter O'Mahony delivered some fitting Jack Crowley comments after surprise Test start
Next Page