Munster followed up their Champions Cup 'Last 16' victory over Exeter Chiefs by travelling up to Belfast and turning over their hosts. After losing in heartbreaking manner to Toulouse, last Saturday night, this was the second damaging home loss in a row for Ulster.

END_OF_DOCUMENT_TOKEN_TO_BE_REPLACED

The score was tied at 3-3 after 20 minutes of the first half, in this United Rugby Championship clash, but Munster looked brighter and more physical than the home side. Their superiority was rewarded with two big tries before the half-time break.

Stephen Archer got over after a series of pick and jam darts from the Munster forwards, before Johann van Graan's side went offload crazy the spread the ball right and wide, with Chris Farrell teeing up Keith Earls for his 61st try in red.

Praise for the "exceptional" Jack O'Donoghue

END_OF_DOCUMENT_TOKEN_TO_BE_REPLACED

Ulster mixed and matched in their backline but their pack was not too altered from the one that started in that home loss to Toulouse. It could have been a reason why the Ulster pack was lacking a bit of bite in the first half.

Trailing 15-3 at the break, the assured Joey Carbery kicked an early penalty to stretch the Munster lead. Just as heads was starting to drop in the stands, Rob Herring got over for a converted try that gave Ulster a glimmer.

Carbery added another penalty to make it 21-10 but Dan McFarland's replacements added some attacking fizz and Sean Reidy got over for a late try that Nathan Doak converted. Ulster still needed a try, late on, to snatch a win, but Munster closed out the match effectively and Carbery added his fourth penalty of the match to add some extra cushion to the winning margin. 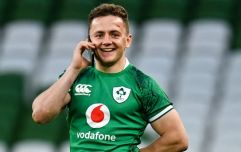 END_OF_DOCUMENT_TOKEN_TO_BE_REPLACED

Alex Kendellen [68 metres made off 14 carries, one turnover and seven tackles stuck] was excellent but he was ever so slightly outdone by his captain, the inspirational Jack O'Donoghue. Ferris called the Waterford native's performance "exceptional" and he is surely pressing for a spot on Ireland's summer tour to New Zealand.

Our Man of the Match: Jack O'Donoghue (Munster)