Great in a losing Eden Park effort, Josh van der Flier was a sensation in Dunedin

A staggering contribution to Ireland's latest win over New Zealand.

At Eden Park, as Ireland got off to a losing Test Series start, two players in green stood out as absolute warriors for the beaten side - Peter O'Mahony and Josh van der Flier.

The All Blacks had their homework done, with former teacher [and Ireland coach] Joe Schmidt drafted in to help with that. With Ian Foster and two of his assistants coaching remotely, Schmidt and Brad Mooar were more hands-on. They had the ABs well-drilled and knew when and where to hurt Ireland.

END_OF_DOCUMENT_TOKEN_TO_BE_REPLACED

The biggest difference from the Kiwi's November lose, in Dublin, and their series-opening win in Auckland was their physicality. That cannot be underestimated and was ultimately what won the game. There were lots of other small victories, though.

One of the smart tactical tweaks made by New Zealand in the First Test was sending up three carrying options on a lot of attacking plays. Knowing all about Ireland going for break-neck line-speed to suffocate opponents, Aaron Smith's missles often found the second and third runners. Ireland were rushing up on decoys. It worked at multiple stages in the game, but look back on Jordie Barrett's try and Ardie Savea's second to see good examples of this.

Van der Flier, with his red scrum-cap, is very much the line-speed leader for Leinster and Ireland. He was neutralised from doing much of what he does best, but he found other ways, at Eden Park, to make his presence felt. 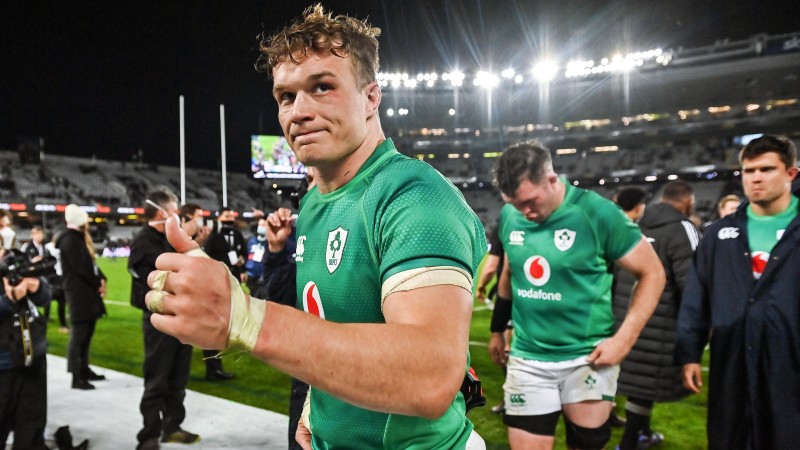 Josh van der Flier of Ireland after his side's defeat in the First Test, against New Zealand. (Photo by Brendan Moran/Sportsfile)

Ireland's openside on the rip

END_OF_DOCUMENT_TOKEN_TO_BE_REPLACED

Josh van der Flier led the way on tackles, made some good carries and was part of a good kick-chase press. He should have had a try, too, and would have admonished himself for allowing Rieko Ioane to dislodge the ball as he was diving over the tryline.

At Forsyth Barr Stadium, Ireland were alive to the Kiwi tactics from the First Test, and had plans to negate them. One was not committing as many to the breakdown but still sending in guys to clear out with force. They then shot the third or fourth defender way out of the line to shut down any attacks from cutting out and around them, out wide. That 'L' shape rush can often leave gaps, but not if the players inside know this is a pre-determined plan and cover the space between them.

END_OF_DOCUMENT_TOKEN_TO_BE_REPLACED

To this end, van der Flier, Bundee Aki [when he came on], Tadhg Beirne, Johnny Sexton and Caelan Doris were key. It was van der Flier and Doris that led and marshalled these defensive presses. The openside's primary job was hitting everything in black that came close to his orbit. He certainly did that, sinking 21 tackles and missing none.

Then we had two big rips, in the process of bringing New Zealand players down. On two occasions, van der Flier won his side turnovers as he ripped the ball away from the carrier's grasp. It was pleasing revenge for that Ioane moment at Eden Park, on the double.

The first one occurred on 43 minutes, with Ireland's lead against the 14 men of New Zealand only three points. The home side had a lineout on their 22-metre line and were attempting to carry up towards their 10-metre. Leicester Fainga'anuku was making the carry when Ireland's No.7, with Sexton backing him up, came over and stole his lunch money:

Teaming up with Peter O'Mahony

New Zealand had a rolling maul on the move, just outside Ireland's 22-metre line. They got a big shunt forward but Aaron Smith was keen to get the ball to his backs. For this sequence, Sexton, Doris and Beirne were both key in repelling the first carrying pod.

Up next was New Zealand tighthead Ofa Tu'ungafasi. Scott Barrett was the decoy, close to Smith, but the scrumhalf fired longer [like last week] to the next man over. Tu'ungafasi came thundering in, with Codie Taylor in support.

Unfortunately for New Zealand, the prop ran into O'Mahony, tackling low, and van der Flier targeting the ball. Out it popped and another Kiwi attack was iced.

On 75 minutes, Ireland were now 23-7 ahead and, after repelling two big heaves at their tryline, were chewing up time. With the clock on 74:55, they essentially had what was their last drive at a miraculous comeback.

With their third attempt to power over from close range, replacement scrumhalf Folau Fakatava made a snipe that got him close. He was taken down a yard from the posts. Brodie Retallick stalked around and, because of the post placement, had a pick-and-go with Josh van der Flier as the sole man in his way.

The big lock picked went for it. Van der Flier got his positioning all right and got both hands under the ball. Same Cane crashed in to try help Retallick while O'Mahony flopped in to muddy the TMO waters. Replays showed, though, the Ireland No.7 had done enough.

Like Jaws coming out of the water with his teeth bared, watch out for the red scrum-cap (below):

That was it. Time was now against the All Blacks, and there would be no coming back.

Watching Josh van der Flier live, the first time, in Dunedin, he looked to have ticked all his usual boxes. In our player ratings, I gave him 8/10.

After watching the full game back, last night, I had to change it to a 9/10.