Andy Farrell said, before Ireland's summer tour, that he wanted to find out if his best, and fringe, players could stand up when it counted. Peter O'Mahony and Josh van der Flier did, and a few others acquitted themselves well.

Still, Ireland got a fearful bouncing by the All Blacks.

END_OF_DOCUMENT_TOKEN_TO_BE_REPLACED

Stuart McCloskey is off to New Zealand, where he will join up with fellow injury cover call-ups Ed Byrne and Niall Scannell. We are up to 43 players, and counting.

Iain Henderson's tour is already over, Cian Healy, James Hume, Harry Byrne and Rob Herring are carrying injuries, Jeremy Loughman and Dave Heffernan are dealing with concussions, Finlay Bealham has tested positive for Covid and Mack Hansen is only set to rejoin the squad from isolation after his brush with the virus.

It looked, for all money, that Johnny Sexton would be missing the Second Test in Dunedin, but Farrell insisted, after his team's 42-19 trolleying at the hands of New Zealand, that his captain was 'in fine spirits'. Sexton was ruled out of the First Test, from the half-hour mark, after slipping into the thigh of Sam Cane and taking a blow to the head. He failed Head Injury Assessment [mid-game] 1 but, Farrell said, passed HIA 2.

Should Sexton pass HIA 3, in the next 48 hours, he will not be recorded as having a confirmed concussion and will be in the selection mix for that Second Test. World Rugby are trying to sort out the concussion quagmire with a 12-day minimum stand-down period but comments from Farrell on players sometimes failing HIA 1 as they 'stumble in their studs' are not helping. 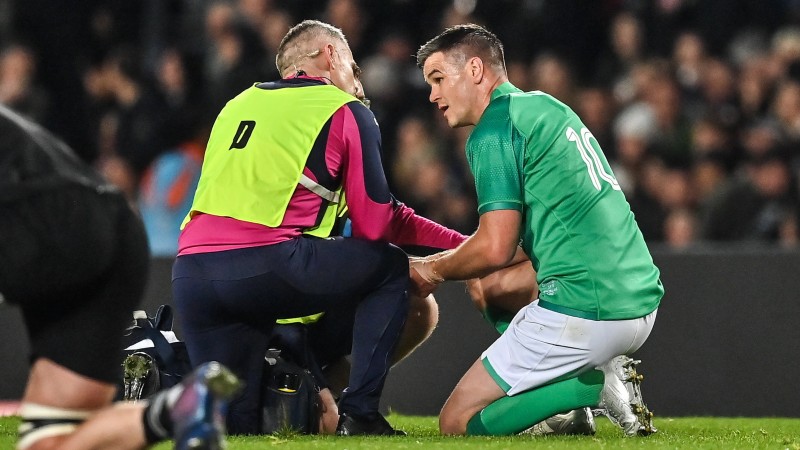 Johnny Sexton of Ireland receives treatment during the Steinlager Series match between the New Zealand and Ireland at Eden Park, in Auckland. (Photo by Brendan Moran/Sportsfile)

After a bright opening 20 minutes, Ireland's night went from bad to worse. They ended up conceding six tries in 50 minutes, lost three scrums, fumbled some lineouts, had bad injury luck, made poor decisions and blew some scoring chances of their own.

END_OF_DOCUMENT_TOKEN_TO_BE_REPLACED

In terms of the playing staff, Jamison Gibson Park had a 'live by the sword, die by the sword' day. In trying to play with tempo, he dropped his teammates in it, on a few occasions. Caelan Doris and Tadhg Furlong were both so subdued, and have been in recent outings, one wonders if they are either carrying knocks or running on fumes. Tadhg Beirne and James Ryan were dwarfed in impact and bite by locks Brodie Retallick and Sam Whitelock.

Positives for Ireland? Their centres, Robbie Henshaw and Garry Ringrose were not perfect but they both kept asking questions and showing up for work. Dan Sheehan's carries were a big part of Ireland's great start. Joey Carbery, Bundee Aki and Kieran Treadwell did decent, off the bench.

The biggest pluses for Ireland came in the form(s) of Josh van der Flier and Peter O'Mahony. The Leinster openside, who claimed best player accolades in Ireland and Europe, was the tempo-setter for his side. He made hard charges, tore up to lead the defensive line, stuck all 20 of his tackles attempted and his red scrum-cap was often at the vanguard of kick chases as the ball saw a lot of air in the opening 30 minutes. 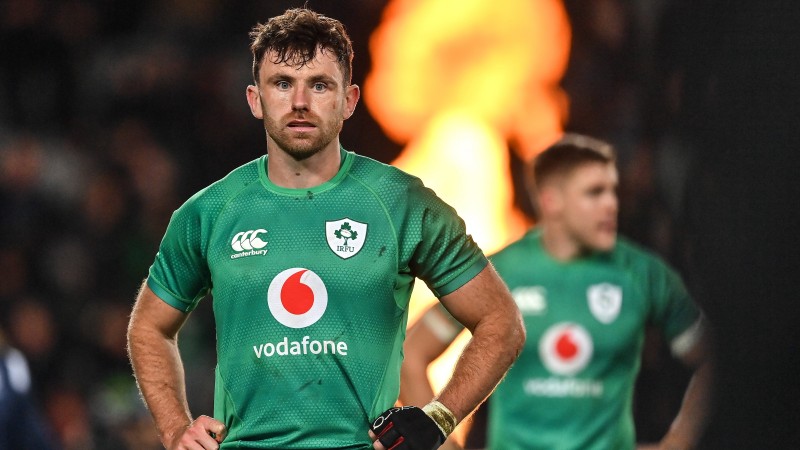 Hugo Keenan of Ireland pictured after his side's defeat in the Steinlager Series match against New Zealand, at Eden Park in Auckland. (Photo by Brendan Moran/Sportsfile)

O'Mahony went hard at it for 80+ minutes and got better as the game went on. This was after starting off with some dominant defensive tackles and nipping in for a first half poach. He should have had a second, too, but referee Karl Dickson penalised him for taking a 'second bite' at a breakdown turnover.

One moment that summed up Ireland's night at Eden Park centred around van der Flier and O'Mahony, coming into that final quarter. Having been denied a Joey Carbery try, Ireland went back for a penalty. O'Mahony popped up a lovely pass and van der Flier crashed over the tryline. As the Irish players headed back to their half, though, replays showed Rieko Ioane had knocked the ball loose.

O'Mahony had another offload in him, and it helped tee up Ringrose for a carry that, two phases later, saw Bundee Aki get over for a consolation score.

Andy Farrell will have plenty of selections to ponder over the coming days, but Peter O'Mahony and Josh van der Flier will be on that teamsheet, in the starting XV, when it is turned in, on Thursday.

If more of their teammates can match their Eden Park efforts, next weekend, Ireland have a chance of taking this series to a decider.