The Leinster man set the tone and tempo for his team's emphatic win over Scotland.

Back in May 2017, Jamie Heaslip punched the air when Ireland were drawn with Scotland and Japan in Pool A of the World Cup. Josh van der Flier had just three starts for Ireland at that stage but his deeds at Yokohama International Stadium backed up the exuberance of the now retired Heaslip.

Van der Flier has so often been overlooked by rugby supporters and pundits when Ireland have a full complement of backs to choose from. Heading to Japan, though, it looked to be the 26-year-old vying with Rhys Ruddock and Peter O'Mahony for the No.7 jersey.

Sean O'Brien and Dan Leavy, we knew early on, would not be making the World Cup. The hope was that van der Flier could be the full-on openside that this Irish team so desperately needs to operate at its' peak.

The Twickenham thrashing, back on August 24, was a wake-up call for van der Flier, as it was for much of that shell-shocked Ireland squad. O'Mahony was drafted in for the following weekend's win over Wales, in Cardiff, but Joe Schmidt gave him another chance in the Aviva Stadium send-off against the same foes.

In that Irish victory, van der Flier was superb as he bolted up on the likes of Tomos Williams and Rhys Patchell - cutting out space, forcing mistakes and conservative plays.

"The guy who stood out for me in the backline was Josh van der Flier," declared Jerry Flannery on Baz & Andrew's House of Rugby. "His acceleration is phenomenal.

"If you go back and look at the game, watch how much pressure he puts on the first receiver and how he forces the pass to be played early. And how quickly he can close the space so when a tackle occurs, he's the first guy in there, freeing up that ball."

That was it. That was our No.7 for the opener.

On Saturday, in Yokohama, against the Scots, van der Flier was released from his cage and was whirring away from the get-go. 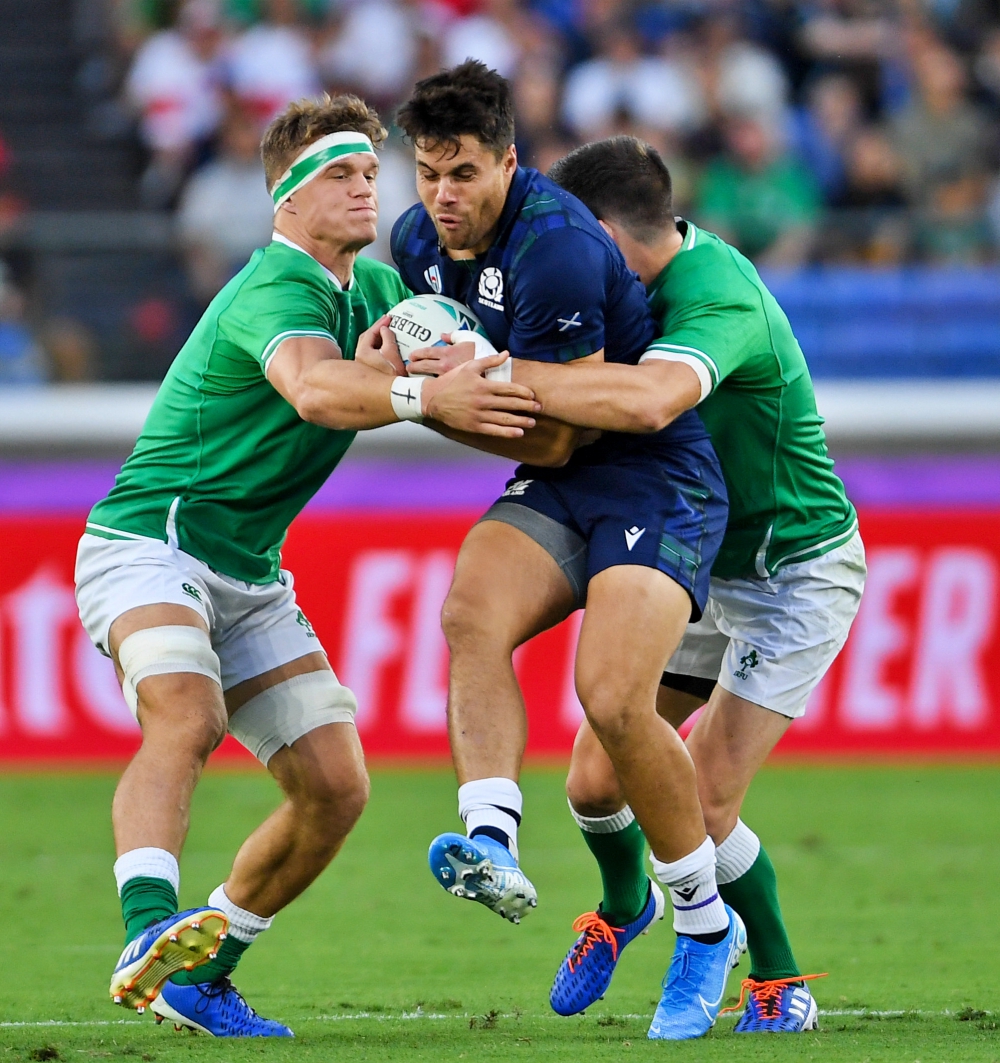 END_OF_DOCUMENT_TOKEN_TO_BE_REPLACED

In terms of raw numbers, van der Flier just made four carries for a minimal return but it was his defensive beavering that stood out. He hit 30+ rucks and was first man in on multiple occasions. His clear-outs were monstrous and the likes of John Barclay, Jonny Gray and Hamish Watson all felt his force at the breakdown.

He stuck 10 first-up tackles but was often the second man in, supporting the tackler, and making it hard as hell for the Scots to get consistent, quick ball.

One aspect that stood out was the sheer metres he covered across the park. He was always filling a gap, making a covering tackle if a teammate missed his and get to ruck after ruck to make his presence felt.

It was not just forwards he was disrupting, the line-speed press he put on Finn Russell must have had the out-half's head melted while he gave Greig Laidlaw a torrid time. When Duncan Taylor and Stuart Hogg got some clear grass in front of them, van der Flier was often the one dragging them to the turf, covering the wider channels to force them inside or pouncing at the ruck when they were scragged.

It was as all action as you can get and both Joe Schmidt and Andy Farrell will enjoy poring back over this footage.

We have often longed for the likes of van der Flier and Iain Henderson to show some dog to go along with their ceaseless work-rates and both forwards delivered today.

The last two games have been huge for van der Flier in terms of what he has delivered, and will potentially deliver for the weeks (and years) to come. Rest up. Go light in training. Produce the goods against Japan again and we'll be well set.


popular
Names beginning to emerge from Lions stand-by list for South Africa
The SportsJOE 12 o'clock quiz | Day 351
"I'd play it in the back garden if I could. We've been training for this since last September"
Finally, Gaelic football is returning to our TV screens - what's on and where?
Player ratings as Man United and Liverpool play out goalless draw
"Some people just have different passions" - Geezer sees where Clarke is coming from
"I’d love to do my Colin Corkery impression and play Junior B football. It depends on the body"

You may also like
1 day ago
Ronan O'Gara will never forget his first encounter with Jonah Lomu 'in his pomp'
3 days ago
Ireland confirm summer Tests, in Dublin, against USA and Japan
1 week ago
Performances against England saw Bundee Aki and Jack Conan become Lions
1 week ago
James Ryan and Iain Henderson may be fighting for one Lions spot
2 weeks ago
Tadhg Furlong declared 'single most important player for Lions touring party'
2 weeks ago
"It's going to be the biggest thing in this person's life, ever" - Rory Best reveals his Lions captain pick
Next Page