What a stupendous start that was for Ireland.

Japan are up in six days' time but Pool A is now effectively in Ireland's control. A stunning performance of power, pace and precision completely overran the Scottish and all but guarantees a quarter final spot [albeit with three games to go].

Ireland bolted from the traps and were 12-0 ahead after 16 minutes, after tries for James Ryan and Rory Best. The Scots got three points back from Greig Laidlaw but Ireland responded with another score from Tadhg Furlong before the half was out. HALF-TIME: Ireland 19-3 Scotland 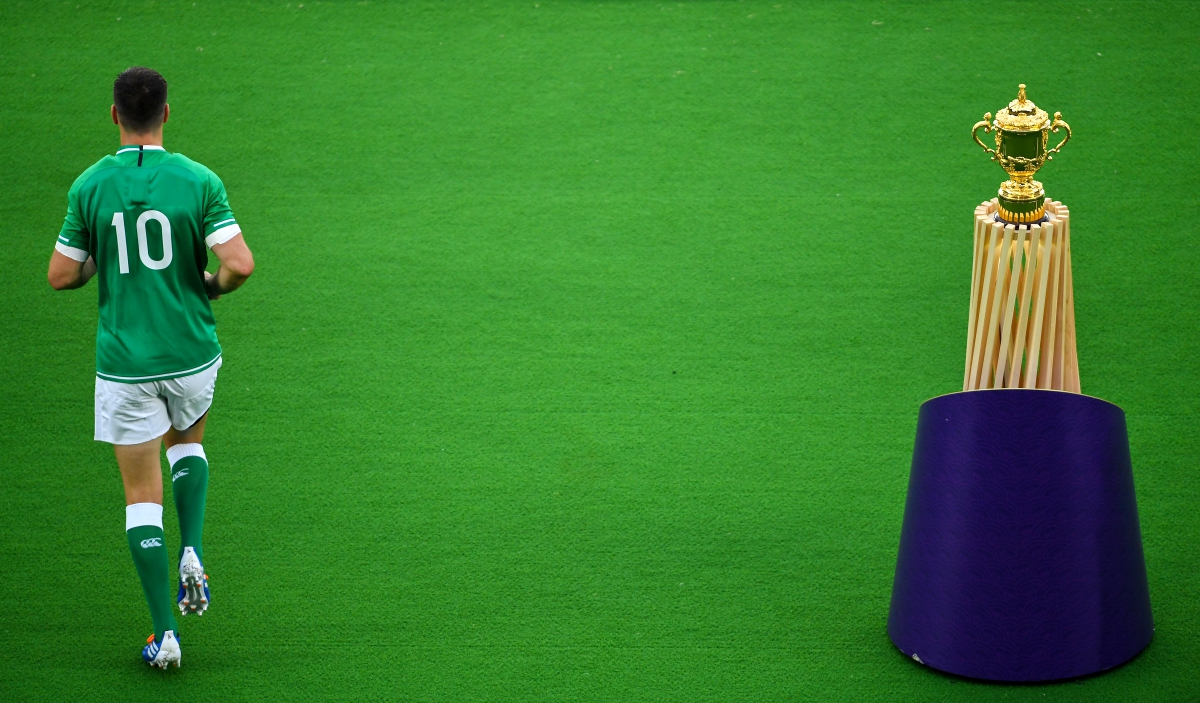 Johnny Sexton runs out past The Webb Ellis Cup prior to the World Cup Pool A match between Ireland and Scotland at the International Stadium in Yokohama. (Photo by Ramsey Cardy/Sportsfile)

Scotland went all out to try and get the first score of the second half but Ireland soaked up the pressure and sucker-punched with an Andrew Conway try after Jordan Larmour slipped him in.

Started his day off with a rash offload but it got so, so much better from there. A couple of clean takes and line breaks that amounted to 50 metres in the first half alone. Secured a turnover with a super jackal on Sean Maitland.

END_OF_DOCUMENT_TOKEN_TO_BE_REPLACED

This guy's fingerprints were all over this game. A couple of nice aerial takes with just one knock-on. Pounced to hack ahead and hared after Stuart Hogg to secure his side a five-metre scrum. Kick chase was spot-on and he was rewarded for his efforts with the bonus point try.

Made a number of firm tackles on Scottish flyers and backed up both Bundee Aki and Chris Farrell when they rushed up.

Shame that a HIA ended his day as he had started like a house aflame. One lovely turnover but his match came to an abrupt end when he rushed up on Finn Russell [yet again] but took a concussive blow.

What a game from the Ulster winger. The first time the cameras focused on him was when he fumbled the ball over the sideline to give the Scots a lineout but it improved immeasurably thereafter. Made one crunching tackle on Stuart Hogg when he bolted from the line and make a cracking break up the left with his near-patented chip and chase. Big try-saving tackle in the final 10 minutes.

END_OF_DOCUMENT_TOKEN_TO_BE_REPLACED

A couple of nervy moments early on but settled nicely as his pack dominated. Landed his first conversion, missed the next and groin issues saw him cede the kicking duties.

The box-kicking was back and the zip was still there in his passing [after that positive outing against Wales]. Carried with attacking intent more, which was positive to see, and he stepped up for goal-kicking duty but was only one from three. His kick to tee up that eventual Conway score was 2017 vintage!

Can be extremely happy with his performance. Scrum was putting the Scots under pressure and Healy was turning the screw. Busy in the loose and latched onto Ryan to power him over the tryline.

Lineouts humming, the scrum provided a great attacking platform, he got through a mountain of work around the park and scored a try off the back of a rolling maul. Not bad for a 37-year-old!

Pure beast mode. Scrum was working like a charm and he stuck nine tackles in his 54 minutes. Powered over for his third Test try and second in two games.

What a bloody game. Teed up that James Ryan try with a steaming line break into the Scottish 22. Meaty tackles and was a menace around the breakdown, securing a great turnover at the start of the second half. Called the lineout well too.

Should he play the way we know in Japan, the whole world will rave about him like we do. Started his tournament excellently and bulled over for an early tempo-setting try. Topped the Irish tackle count on 14.

Started off well and latched onto Best to help drive him over the line. Two good takes at the lineout but received treatment on the pitch before, on 27 minutes, he went off for a HIA and did not return.

That red cap of his was all over the pitch at Yokohama International Stadium. The pressure the openside put on the Scottish half backs and midfield was so impressive and some of his clear-outs were merciless. Only made a handful of carries but his brief was getting off the line and setting an aggressive tone.

One superb, bullocking break and carry that reminded us just how good the guy can be. Carried 15 times for 43 metres and was a serious force.

On for van der Flier (blood sub) then O'Mahony (HIA) and put in a good shift. Only real blemish was a penalty he conceded to give Laidlaw and easy score.

On early for Bundee Aki and carried on with that relentless tone. A number of huge carries, line breaks and tasty passes. A demon in defence too.

Came on and the scrum turned from great to world-class. Great impact sub.

One handling error when a great attack looked on but was otherwise solid and scrummaged brilliantly.

Looked like he had won a good turnover but Wayne Barnes.

Enjoyed himself out there. Teams haven't figured him, and his bag of tricks, out yet.

popular
The SportsJOE 12 o'clock quiz | Day 140
"There's times I do think I probably have let people down but in fairness, I have got good support from back home"
Only a Champions League fanatic would get full marks in this quiz
Frustration boils over for Shane Lowry at PGA Championship
Getting 20/20 in our Champions League quiz would be a miracle
Jonny Hayes and Aberdeen teammates apologise after Covid cluster shutdown
Rory McIlroy speaks superbly on conscience call that cost him at US PGA
You may also like
3 weeks ago
James McClean opens up on sickening, Covid-related hate mail
4 weeks ago
When the President interrupted a Euro 88 pint between Charlton and Dunphy
4 weeks ago
How an uncultured Englishman conquered Ireland's sporting heart
4 weeks ago
The SportsJOE 12 o'clock quiz | Jack Charlton special (Day 112)
4 weeks ago
Growing up in the shadow of Jack Charlton's Ireland
3 weeks ago
Connacht confirmed for next season's expanded Champions Cup
Next Page