Johnny Sexton broke into a broad grin after initially trying to dead-pan on Antoine Dupont.

From one World Rugby Player of the Year to the other, Sexton went on to praise the France scrumhalf as someone playing at the very top of their game.

END_OF_DOCUMENT_TOKEN_TO_BE_REPLACED

You get a sense, very often in this game, how rugby can quickly move on. Dan Leavy and Jacob Stockdale were both Grand Slam heroes back in 2018. Both are struggling with injury issues at the moment, but the show is rolling on without them. They are both in their mid 20s and hopefully have time yet to come back and play big parts again.

Johnny Sexton, then, is every bit the veteran. 36 years old and heading into his 13th Six Nations campaign. He had to wait a stretch to get the Ireland captaincy, but is revelling in it now.

When you have been covering the sport a long stretch, too, these event launches can be a bit of a same-same chore. The two men enjoying it most today, though, were Sexton and England head coach Eddie Jones. Not far behind was Andy Farrell.

Sexton is at his happiest when he is playing regularly and, naturally enough, things are going well for Leinster and Ireland. Having got two Leinster games under his belt, in two big European wins, he bounced into today's virtual Six Nations launch.

He confirmed that he was one of the Leinster players to have picked up Covid, in December. It hampered his return to action, and that first run-out, but he is confident that he is over the worst of it, and the after-effects.

"The first game back was a European game so I blew the lungs out on that. It was a shock to the system but I felt much better last week and hopefully, now we will train hard this week and it will be another good step in my preparation.

"I know I need to train well to earn my place in the team and my focus is getting as fit and ready as possible to challenge for that spot." 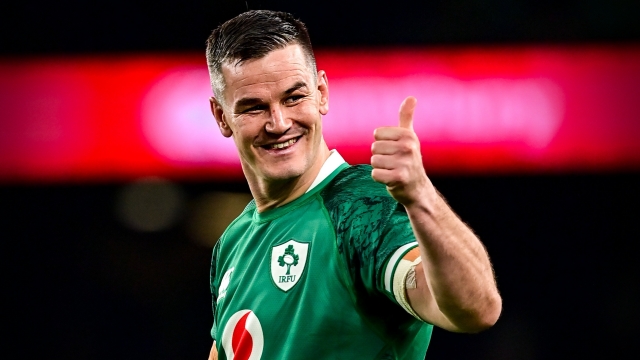 The players that came up most, over the course of many conversations with the Six Nations coaches and captains were, in order:

END_OF_DOCUMENT_TOKEN_TO_BE_REPLACED

Dupont is understandable. He is the current world's best and a guy that makes the game so enjoyable to watch. Himself and Romain Ntamack are a special pairing.

The Toulouse scrumhalf is also France captain for the championship, but out of the mix, at present, after himself testing positive for Covid. Gäel Fickou will deputise for him, if needed, when they open up against Italy.

Biggar is the new Wales captain and has had a few run-ins with Sexton. Farrell is out of the entire championship, so there were lots of questions about how Marcus Smith and England would cope without him. Smith's potential has everyone excited.

Then it was Fickou, Biggar, Tom Curry and Stuart Hogg, all lining up to talk up Sexton. The respect these men, world-class operators themselves, have for the Ireland star was clear to see.

We heard about how he embodies Ireland's spirit, that 2018 drop goal in Paris, how he can be a grouch sometimes and how he drives standards. He is someone, like Alun Wyn Jones, that has become a living legend of the game. Spoken of in awe, by fellow players, while still out there doing his thing.

It used to be Paul O'Connell and Brian O'Driscoll that inspired such glowing comments. Sexton has now taken up that mantle.

This could well be the Ireland captain's penultimate Six Nations. For all the Tom Brady talk, the end goal will surely be the 2023 World Cup, over in France.

He has the stage a while yet, and he has finally reached a stage where he is looking around and enjoying it all. Even the six-hour media sessions.