Processes, accuracy. Following the processes and being more accurate.

That was the drum Ireland attack coach Mike Catt was banging in his Tuesday appearance in front of the media, in New Zealand. The reporters tried their best to get his take on concussion questions, involving Johnny Sexton and Sam Whitelock.

The latest news coming out of the Irish and All Blacks camps, on Tuesday, saw Johnny Sexton cleared to play in the Second Test and Sam Whitelock not only ruled out of that match in Dunedin, but potentially missing the Third Test, in Wellington.

END_OF_DOCUMENT_TOKEN_TO_BE_REPLACED

Whitelock presented with delayed concussion onset after Saturday's 42-19 New Zealand victory in the First Test. As it was confirmed, he now falls under the newly introduced 12-day minimum stand-down period for a player that has suffered concussion.

Sexton failed a Head Injury Assessment, on Saturday, after slipping and colliding with the forearm and thigh of Sam Cane. He did not return to the game, but passed HIA 2 after the match. He underwent HIA 3 on Monday and passed that, so that is now down in the books as a non-confirmed concussion. 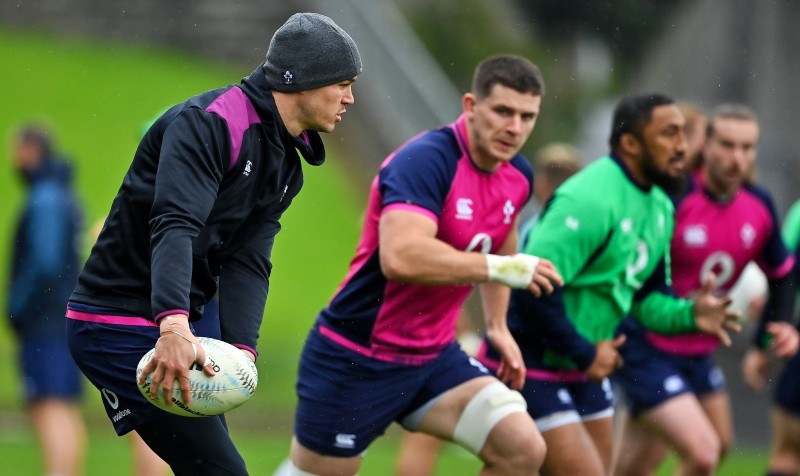 Johnny Sexton 'is good to go, for Saturday'

At Tuesday's briefing with the press, Mike Catt was not about to get drawn into what World Rugby should or should be allowing for players undergoing the HIA process. An exchange with a local journalist went as follows:

Can you just confirm that Johnny Sexton is okay, and can play this weekend?

There seems to have been some confusion around the HIAs, and World Rugby's rulings. Are you able to clarify some of those things?

MC: Not really, no. That's not my... I don't work for World Rugby, unfortunately! Johnny is fit. Johnny has passed every test that he has needed to pass. So, from my point of view, he's good to go.

He's going to be training?

Asked by the same reporter how much of a "relief" it is to have the primary outhalf and captain available for Ireland's Second Test, Catt said, "He is a massive cog in there, but I think Joey came in and did well."

END_OF_DOCUMENT_TOKEN_TO_BE_REPLACED

Sexton was pictured in training with the Ireland squad, at North Harbour Stadium, on Tuesday and TV footage before the full, off-camera session showed him taking part in the warm-up drills.

On Saturday, Ireland head coach Andy Farrell had suggested the current HIA process, during games, is not an exact science. He commented:

"You can stumble in your studs, you know, and not go [back] on."

Asked about experienced second row campaigner Sam Whitelock missing out on Saturday's match, in Dunedin, Catt said it was 'a big blow' for New Zealand.

"Sam has played some amazing games for them, and he's a brilliant rugby player," Catt added, "but we're under no illusion that the next guy stepping in, behind him, is not that far from Sam. So, again, it is us focusing on our processes, and getting our accuracy right."

Processes and accuracy. The key words Ireland were drilling home.

This has been a summer in which other nations are being proactive with concussed players, especially those with histories of head injuries. Wales and England have, respectively, sent Tomas Francis and Tom Curry home from their tours to South Africa and Australia. Both men left games with concussions, on Saturday.

Ireland have two players currently going through that 12-day stand-down period - prop Jeremy Loughman and hooker Dave Heffernan - after confirmed concussions. Both will hope to be back in contention for the games at the end of the tour.


popular
Gary Neville highlights Erik ten Hag decision that 'backfired spectacularly' at Brentford
"I've never seen anything like it" - Pitiful Manchester United reach new low at Brentford
"He can add something to our attacking line up" - Jamie Clarke signs for Northern Irish soccer club
"It was unfair on the Galway backs” - Tomás Ó Sé admits that Kerry benefitted from unfair rule
"I’ve never heard someone say something as stupid” - Katie Taylor blasts Jake Paul's rematch comments
Erling Haaland registers strange statistic on home debut as Mark Travers keeps the City score down
Ranking the best county GAA songs of all-time (32-1)
You may also like
2 weeks ago
“My confidence was on the deck" - Aaron Connolly explains why he has made the move to Italy
2 weeks ago
Every Irish transfer in football, this summer, as several big deals get done
3 weeks ago
Six Irish players make damn impressive 'World XV' that would take some beating
3 weeks ago
The frontrunners for Ireland's 33-man squad for the 2023 World Cup
3 weeks ago
All Blacks media manager explains why Ian Foster appearance was cancelled after Ireland defeat
3 weeks ago
Warren Gatland selects nine Irish players in his strongest Lions XV, right now
Next Page