Ireland could do with some good news around about now.

Johnny Sexton last 30 minutes of the First Test against New Zealand before another blow to the head ended his 106th Test outing. He will now miss the Second Test, too.

Such is the early fudge that Ireland find themselves in, we were met with the pre-match sight of former Leinster prop Michael Bent out on the Eden Park pitch for the warm-ups. Bent is back in his native New Zealand but was drafted in as a short-term 'additional player' as Jeremy Loughman was ruled out, Finlay Bealham tested positive for Covid and Cian Healy [named on the bench] was carrying a knock.

END_OF_DOCUMENT_TOKEN_TO_BE_REPLACED

Leinster loosehead Ed Byrne has just arrived in New Zealand but a delayed flight meant he got to Auckland too late to getting along to Eden Park.

Mack Hansen [Covid] was still isolating, James Hume [groin] is a doubt for further tour action and Iain Henderson [knee] is already headed home. What Ireland needed was as pain free a match against the All Blacks as one could hope for.

As it all played out, Sexton went off, and subsequently failed, a Head Injury Assessment, replacement hooker Dave Heffernan lasted two minutes before going off injured and Andrew Porter was forced to play the full 80 as there was not a fully fit sub on the bench. It was a tough night at the office as Ireland conceded six tries in a 42-19 loss to New Zealand. 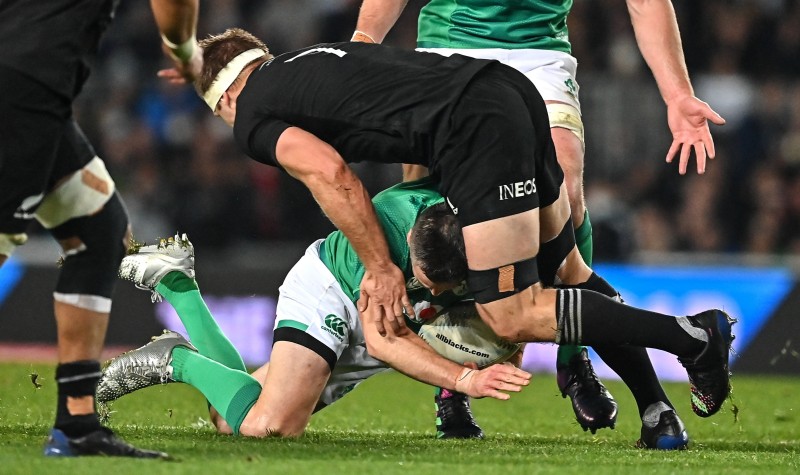 Jonathan Sexton collides with Sam Cane during the Steinlager Series match between the New Zealand and Ireland at Eden Park. (Photo by Brendan Moran/Sportsfile)

END_OF_DOCUMENT_TOKEN_TO_BE_REPLACED

Johnny Sexton copped a Sam Cane forearm to the head when he slipped as he was making a carry inside the New Zealand 22. Such was the momentum of the slip forward that Sexton's head collided off Cane's thigh, too.

The Ireland captain immediately brought his hand to his head, but resumed his footing after a beat and carried on playing. The footage, and Sexton's reaction, deemed a Head Injury Assessment was required.

END_OF_DOCUMENT_TOKEN_TO_BE_REPLACED

With his team now trailing 14-5 after a Sevu Reece intercept try, in the previous block of play, Sexton looked far from impressed as he was accompanied off the pitch. It was subsequently confirmed that he had failed the HIA and Joey Carbery remained on, in his place.

Sexton is now set to miss the Second Test after the new World Rugby protocols and guidelines around concussion were introduced on Friday, July 1.

The outhalf must now observe the new, increased minimum stand-down period of 12 days for any player failing a HIA, or later presenting with concussion symptoms. Announcing the guidelines on June 21, World Rugby stated:

'The evolved approach will see players with a history of concussion or who are removed from a match with obvious concussion symptoms, sit out from play for a minimum of 12 days, likely missing their next competitive match.'

Sexton missed the end of the 2020/21 season after he sustained a concussion in an April 2021 Champions Cup game against Exeter. He had a similar, lengthy concussion lay-off during his first season at Racing 92, in France.

Following the game, Andy Farrell was not completely ruling Sexton out of the Second Test. His captain was 'in fine spirits' while Heffernan had a 'confirmed concussion'.

Ireland are now likely to start Joey Carbery in the Second Test. It remains to be seen who his back-up would be, as Harry Byrne was out of First Test contention with an injury picked up on tour. Ciarán Frawley of Leinster is an outhalf cover option.