As Sky Sport NZ showed floods of black-clad New Zealand fans heading back towards Wellington downtown, Johnny Sexton and his Irish teammates did a lap of honour around 'The Cake Tin'.

A decade ago, Ireland came to New Zealand and pushed the All Blacks close, in Christchurch. They got thumped in the other two games, including a Test record loss of 60-0.

Five Irish players featured in that 60-0 defeat, in Hamilton. A decade later, all five danced and partied in Wellington after playing big parts in a Test Series win over the All Blacks.

END_OF_DOCUMENT_TOKEN_TO_BE_REPLACED

For Johnny Sexton, Cian Healy, Conor Murray, Peter O'Mahony and Keith Earls, this Test Series triumph over the All Blacks was extra sweet. It is little wonder O'Mahony shed a tear or two.

So, after the Steinlager Series trophy was held aloft, the veterans of the Irish squad tried their best to keep up with the young lads. It will be a lively night in the capital city, and a lively morning too. Back in the Sky Sports studio, Rob Kearney predicted that captain Sexton would lead the celebrations charge.

When the celebrations finally died down [somewhat], Sexton tore himself away to do his post-match duties with Andy Farrell. He explained to any curious Kiwis, or neutrals, why Ireland had gone all Italia '90 with their victorious lao of honour and sing-song. 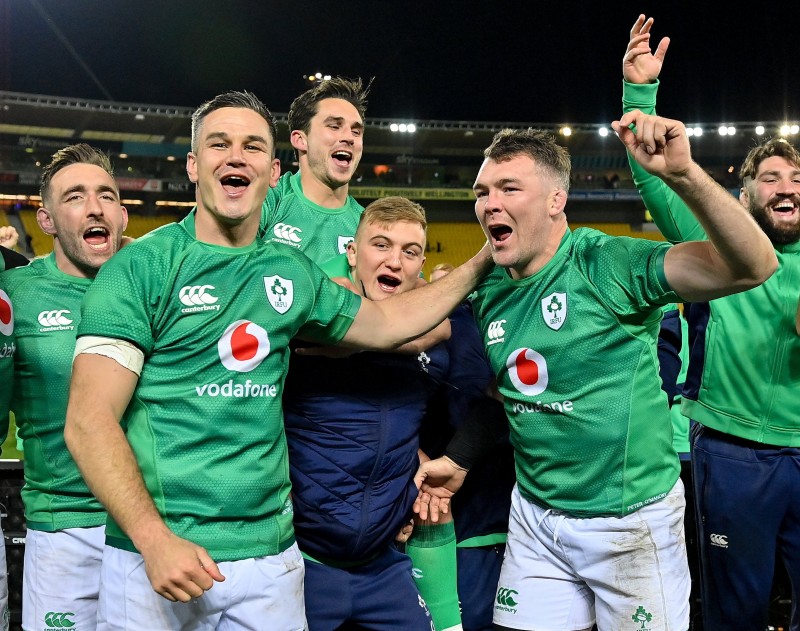 'It’s great to be a part of' - Johnny Sexton

END_OF_DOCUMENT_TOKEN_TO_BE_REPLACED

There was an eight-point swing at one stage of the second half, when a Sexton penalty hit the crossbar and, less than 60 seconds later, Will Jordan beat Johnny Sexton to the corner for a try.

The Ireland captain admitted that there had been moments of doubt, but praised his teammates for rediscovering their focus and getting into position for what proved to be a match-clinching try from Rob Herring. On the wild scenes of celebration, Sexton said:

"It doesn't get much better than this. By saying that, it's the biggest respect we can give New Zealand.

"The celebrations probably weren’t the most humble but that shows how much it means to us," he added. "To come down here, we came here with the Lions and we thought it was great to get a draw. The guys that felt we should have won were criticised, so to come down here and do it, is just very, very special."

Anyone that knows the history of these two sides - one-sided for 111 years and edging Ireland's way since 2016 - will know Sexton does not need to offer any explanations for the over-joyed celebrations.

Once those post-match duties were complete, Sexton headed back to the 'Away' changing room for another chorus of 'Olé, Olé' and some beers with teammates, and the beaten All Blacks.

Reflecting on a fantastic three-Test series, Johnny Sexton reflected it 'would be a shame' if World Rugby's league format plans put an end to such tours.

Big smiles broke out when the 2023 World Cup was raised, but Sexton affirmed this is only a step along the road that he, and this team, are on.