From Ponsonby to Limerick, via Dargaville, Athy, Chicago and Dublin.

Like many Kiwi kids, Joey Carbery only ever wanted to play rugby. He can't remember when he first picked up a rugby ball - he was far too young for that - but it was rarely out of his hands thereafter.

Having spent the first couple of years on this earth in Auckland's lively Ponsonby [just outside the city centre], the Carbery's headed north to Dargaville and one of the most picturesque places in New Zealand - Bayly's Beach.

Sitting with Carbery in Dublin, some 20,000 kilometres and two decades on, the Munster and Ireland outhalf paints a picture of life growing up around Mahuta, Daragville in rural New Zealand.

"You can get speeding tickets on the beach. It's insane.

"The police actually police it, which is pretty crazy. I think it is an actual registered highway because you can get from the top of the North Island a good distance down [towards Auckland]. A lot of people would drive on it."

Carbery's parents - Joey Sr. and Amanda - are both from Athy but his father emigrated to New Zealand with his family when he was just two years old. The Irish connections were strong, despite the distance, and it eventually led to the Carberys meeting, marrying and having three children [all Kiwis] of which Joey is the eldest.

"I have really fond memories of growing up on the beach, hanging out there with friends and going surfing a lot with dad, before school," he says. 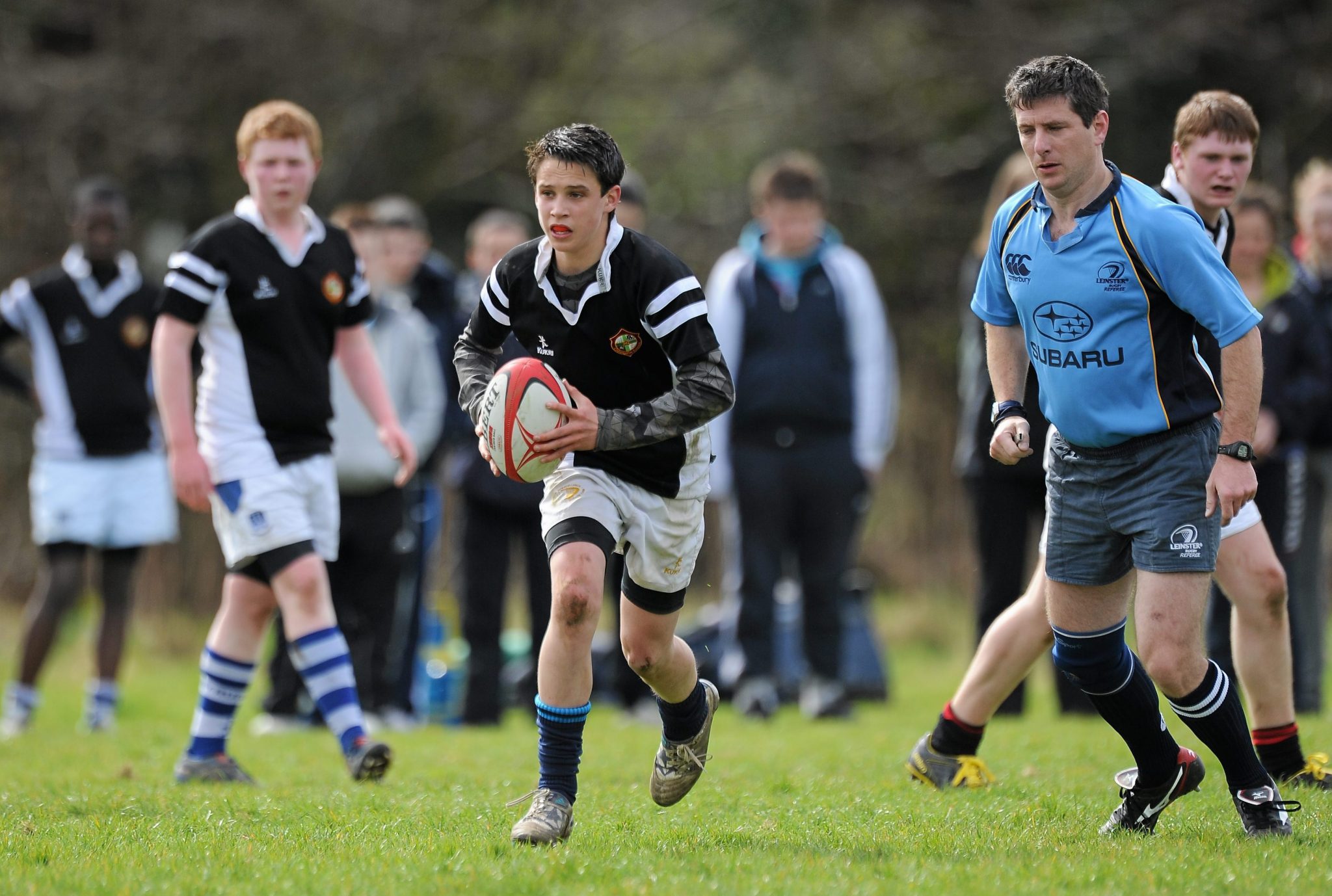 Joey Carbery in action for Ard Scoil na Tríonóide in the Junior Shield, in 2011 (Pic: Sportsfile)

END_OF_DOCUMENT_TOKEN_TO_BE_REPLACED

There were two trips, nay treks, to Ireland when he was growing up. He can't remember much of the first trip, when he was aged just two, but loved coming up, aged seven, for his aunt's wedding.

Surfing, growing up outdoors, bare-foot most of the day and pelting around with a rugby ball. It was the quintessential New Zealand upbringing but he cherished his Irish side too. "It was pretty cool being the Irish kid," he says. "I'm pretty cool to have experienced both sides of the world."

Joey Sr. was, and is, a rugby nut and that rubbed off on each of his children. He played select rugby - scrumhalf, outhalf or fullback [like his son] - for Northland U21s and did some coaching, back in New Zealand, when he found time outside of his family commitments and his job as a banker.

Dan Carter and Mils Muliaina were his two favourite players and he grew up at a time when the All Blacks were flush with exciting backline talents. The World Cup eluded them up until 2011, when Carbery was in Ireland, and he can recall the 2003 failure [semi-final loss to Australia] as a time the country reacted 'like the world had ended'.

Auckland was the team to watch in The ITM Cup and Auckland Blues were the Super Rugby team to follow. He can vaguely recall the Blues' last Super Rugby title - the 2003 season - and remembers seeing a future Leinster teammate facing the British & Irish Lions on the 2005 Tour.

"We went to a lot of the ITM Cup and Blues games," he says, "and a good few of the All Blacks games, especially when Ireland were playing. We would have always got along to see them. I went to the Auckland versus Lions game during their 2005 tour. Isa [Nacewa] was playing 10 that day. It was pretty funny, then, playing with him [at Leinster] years later."

Nacewa, who started the game on the right wing before taking over at outhalf later in the game, scored a try that. Graham Rowntree lined out for the Lions that day as they won 17-13. Rowntree and Carbery will be reunited at Munster next season. 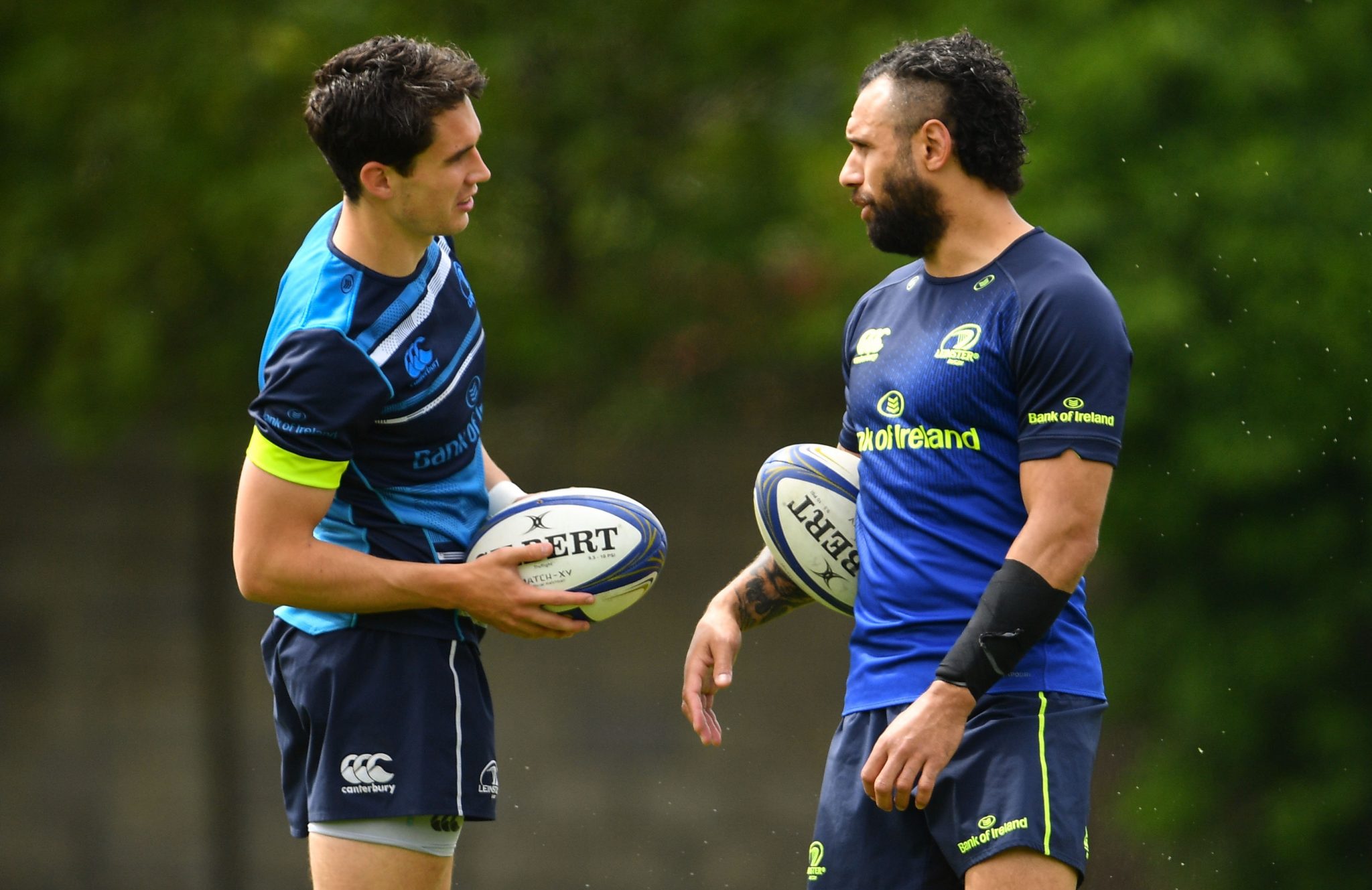 Joey Carbery pictured with one of his rugby heroes, Isa Nacewa, in 2017. (Pic: Sportsfile) 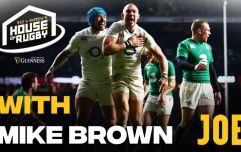 END_OF_DOCUMENT_TOKEN_TO_BE_REPLACED

Carbery was 11 when his parents informed him the family was moving to Ireland. The overriding feeling, trumping sadness in leaving friends behind, was excitement. "I was probably too young to realise the severity of [the move] and how big a distance it was... it probably only hit me about two or three years later."

At that stage, Carbery had completed a year of primary school - learning to keep his socks and shoes ON when he arrived in the mornings - and was settling into life as a secondary school student in Athy's Ardscoil na Tríonóide.

It was with his school that Carbery played soccer with and 'a little bit... not too much' GAA with. Athy GAA have the likes of Kevin Feely, Niall Kelly and both David and Mark Hyland to boast of, but Carbery took the less travelled rugby path. His father had left banking behind to begin full-time work, in Ireland, as a Youth Development Officer with Leinster Rugby. Joey Sr. was well placed, then, to give his son support and guidance, and to help plan a pathway to the Leinster squad.

"He has always been there, for extra training sessions or for someone to go and talk to after a game. The first person I'd normally talk to after a game would be my dad, outside of the circle of the team I'm involved in. It's always good because he'd always give his honest opinion, whether it was good or bad, or what I could work on.

"He's always been there, having been my coach as well, from a young age. He always would have went a bit harder on me. At the time, we clashed heads a lot, but now I look back and I can see that he has helped me a lot."

Joey Carbery was tipping away, down in Athy, and making age-grade appearances for Leinster along the way, but he opted to put himself where all involved with the Leinster Academy could not miss him - Blackrock College.

Even at the age of 10 and 11, in New Zealand, his sights were on the Auckland Grammar, which produced the likes of Grant Fox, Doug Howlett and Rieko Ioane among 50+ former pupils that have pulled on the All Blacks jersey. Now in Ireland, son and father gunned for Blackrock, and got it.

"It was pretty cool [to look at the old team photos] and see the people that have been there before you," he says. "To see what the school has done and the players they have produced. It really told me a lot of the place I was going into."

END_OF_DOCUMENT_TOKEN_TO_BE_REPLACED

In those team photos would have been the likes of Brian O'Driscoll, Luke Fitzgerald, Fergus Slattery, Jordi Murphy, Garry Ringrose and more. There was a legacy to live up to but Carbery and his year certainly did, clinching the Leinster Senior Schools Cup in 2014.

Onwards to the Leinster Academy and a year with UCD before switching to Clontarf and helping them to the All-Ireland league title in 2016, just two months after making his senior debut for Leinster against Glasgow Warriors. Six months after his debut, and a pre-season shared between the academy, primarily, and the senior squad, and Carbery was handed the 10 jersey for his first ever start.

Treviso never knew what him them as Carbery scorched in two tries and tortured them with line breaks, offloads and smart kicks in a man-of-the-match performance: 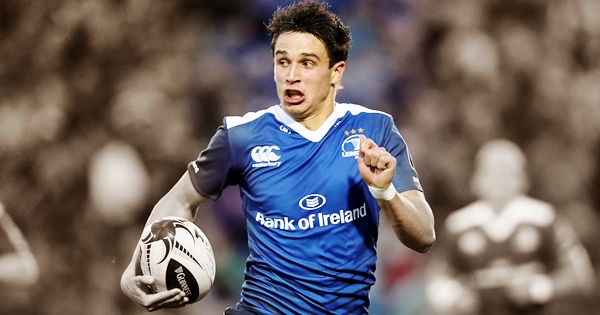 Look, we know it was Treviso, but Joey bloody Carbery...

Just what we need

Two months later and, days after his 21st birthday, Carbery was coming off the bench for his Ireland debut - making important tackles and kicking a tough conversion - in the country's first ever Test win over New Zealand.

"My dad was over in Chicago for that game and then I have a few cousins that live in America. It was a pretty special week... It was weird [at Soldier Field] because you ran out onto the pitch and the crowd were so close because those American football pitches are so much smaller. It was my first time in the States, as well, and first time playing for Ireland; I couldn't believe that either. It was a whole load of new sensations thrown at me at once, but incredibly special." 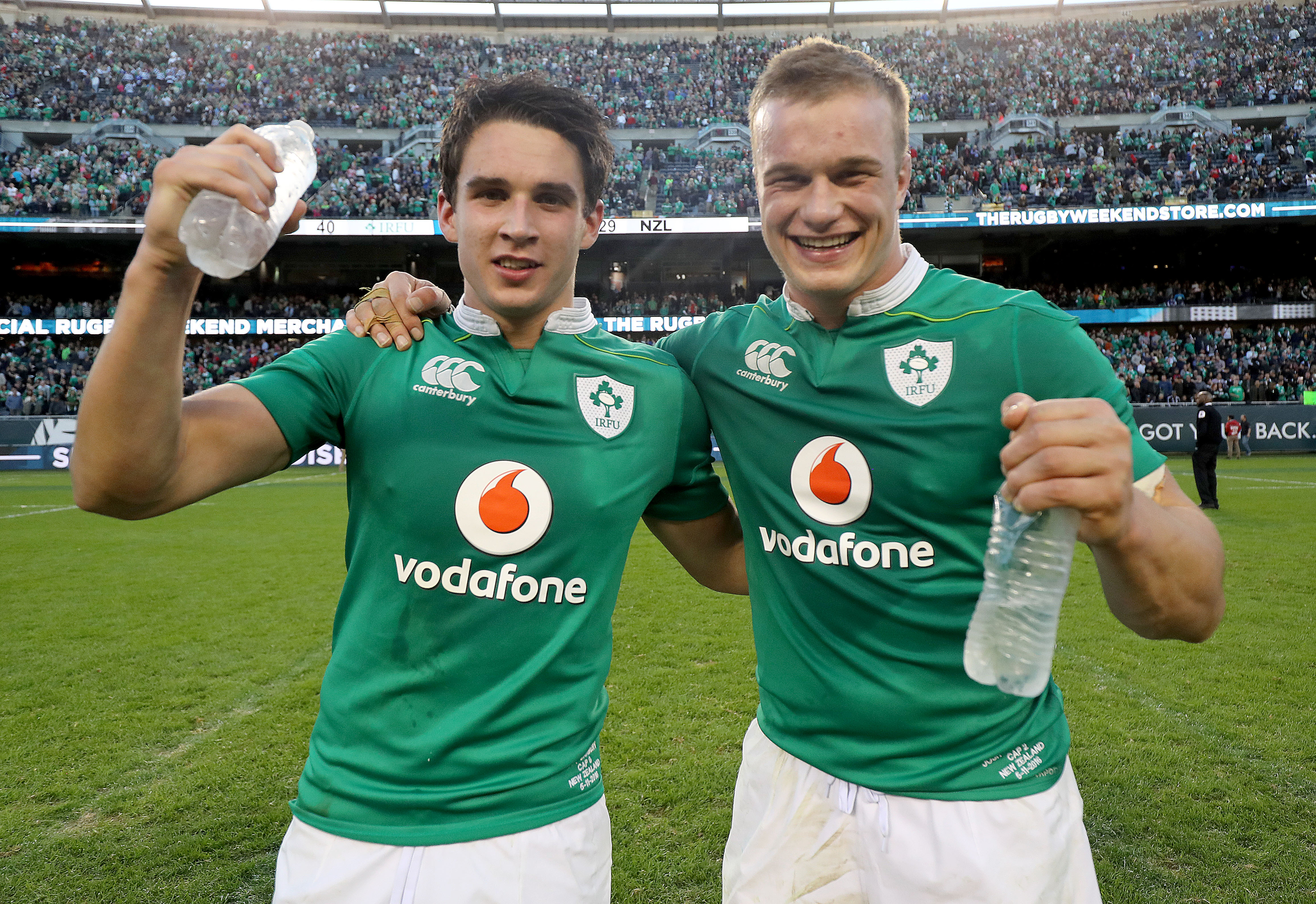 If there are times when it all feels like things are coming along at too rapid a pace, it's because they are. Carbery will be 23 when [fitness withstanding] he plays at his first World Cup. He has racked up 18 Ireland caps, won a Grand Slam, Guinness PRO14 and Champions Cup title in one season and has already shown, in one injury-interrupted season at Munster, that he has what it takes to run the show in big games.

To switch off from the sport he so often lives and breathes, Carbery has his family, friends [spread over Athy, Clontarf and from his Blackrock days] and his girlfriend, Robyn Flanagan.

A student at Dublin Institute of Technology, Robyn spent a year for college in Paris over the same period he was settling in at Munster after his big switch from Leinster. Both shared their fish out of water tales, lived to see each other again, often 'spoke very little rugby' and have been reunited in the past month.

For a lad that grew up wanting to be the next Dan Carter, Joey Carbery is now the young Munster lads dream of being.

"That's very cool, I must say. Having been one of those kids, who wore those jerseys, and now for those kids to think like that [about me] is very special. One of the coolest parts about me, doing my job, is the impact you have on those kids. For them to come up and meet up - for them and for me - is class." 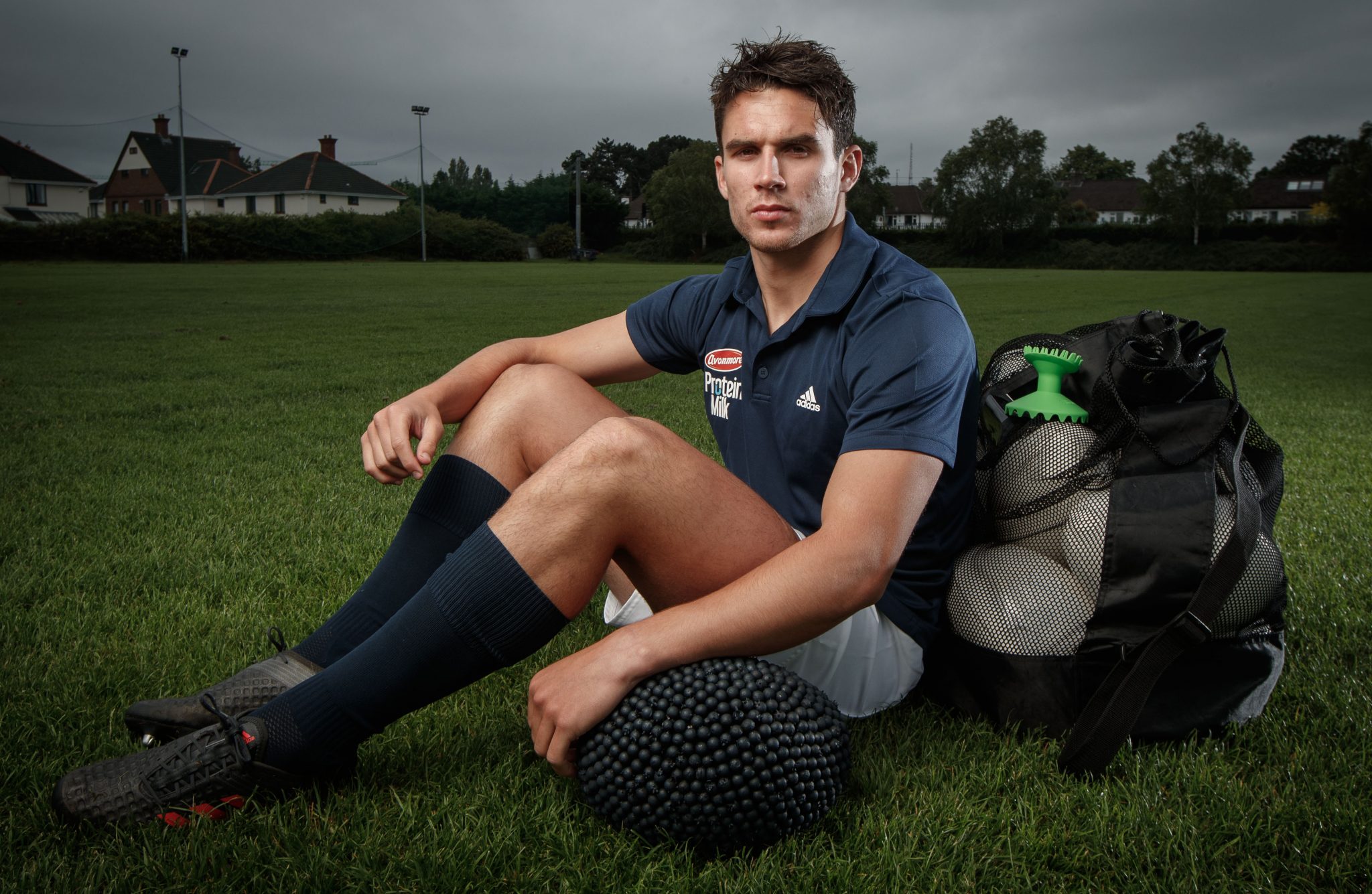 Pictured, as part of Avonmore Protein Milk’s ‘You’ve Got This’ campaign is Joey Carbery, who is inspiring others through his performances last season, showcasing that hard-work and dedication are key to success, as he launches new Blueberry Protein Milk. (©INPHO/James Crombie)


popular
The SportsJOE 12 o'clock quiz | Day 75
SportsJOE 2000s Football Quiz | Round 4
SportsJOE 2000s Football Quiz | Round 3
The SportsJOE 12 o'clock quiz | Day 73
You'll need to be on top form to get 20/20 in this 1980s footballers quiz
QUIZ: Can you name the Football Italia cult heroes? | Part 2
The SportsJOE 12 o'clock quiz | Day 74
You may also like
2 weeks ago
Baz & Andrew's House of Rugby - Finn Russell on life in Paris
3 weeks ago
Ben Youngs talks about Leicester Tigers' infamous Tuesday training sessions
3 weeks ago
Ryan Baird on his physical and mental preparations to hit rugby's return running
4 weeks ago
"He's a massive human being with an unbelievable skill level" - Jean De Villiers
4 weeks ago
'They're not sure if we'll have live sports in South Africa for the rest of the year' - Jean De Villiers
4 weeks ago
Baz & Andrew's House of Rugby - Jean De Villiers and Ryan Baird
Next Page