"I know it has happened to us a couple of times."

Timing is a funny thing.

The week before the 2019 Guinness Six Nations launch, in London, Leeds boss Marco Bielsa spoke openly about spying on opposition teams' training sessions and compiling dossiers on the players and tactics. The Argentine even went so far as to put together a Power Point presentation, for invited media, to explain what he was up to.

So, it was with that story still in the headlines that many rugby reporters headed to the Hurlingham Club for the Six Nations launch. The topic of spying on the opposition came up. England head coach Eddie Jones was keen to rip the piss and joked about heading off, after the launch, to buy a pair of binoculars to take a closer look at Ireland in training.

Ireland's Joe Schmidt did not treat the matter so lightly and told reporters it was not something he would do, nor endorse. "I'd have to say I'm not a believer in it," he said.

"I don't believe that's it's necessary and I'd like to think there's still a sense of fair play... But I know it happens. I know it has happened to us a couple of times - but I don't think you get distracted by it.

"When you get the feedback, when it filters back, you're disappointed but you kind of acknowledge, 'OK, well, that's their process, that's their way of collecting information'. It was stumbled upon at the time - or one of the times. You just get on with it." 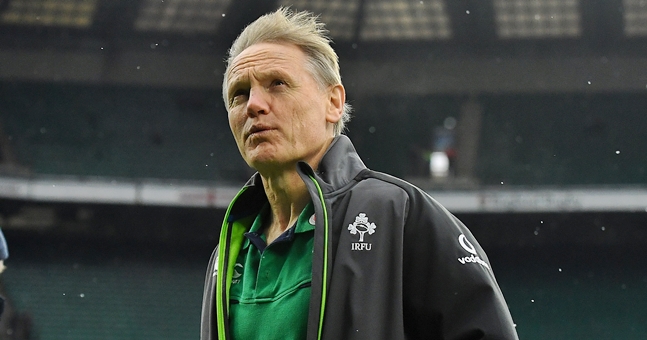 Schmidt said his attitude at the time was to shrug his shoulders and get on with it because 'if you were paranoid about it you'd never actually train properly'. That being said, Carton House - Ireland's training base - does have high fences up around the training pitches, which are manned by security staff.

END_OF_DOCUMENT_TOKEN_TO_BE_REPLACED

Schmidt says he does not, and never has, spied on teams to get ideas but he did admit he would scour footage of games across the world and steal certain moves that may benefit his team. As he remarked after the New Zealand win, in November, there is no patent on rugby moves.

The subject of spying in rugby was discussed on the most recent episode of JOE UK's House of Rugby [from 35:00 below], with Northampton and England forward James Haskell claiming the practice of spying on the opposition was, at one time, commonplace.

"I know for a fact that, in the past, if team did their captain's run at the stadium, you'd always record them because they're in your stadium.

"If they are playing away, you can put a camera wherever you want, in Twickenham. And you can just record it and try to get their lineout calls. Why would you not do it?"

Fortunately for Ireland, their Six Nations opener against England is taking place in Dublin's Aviva Stadium next Saturday.


popular
QUIZ: Can you name the Football Italia cult heroes? | Part 2
The SportsJOE 12 o'clock quiz | Day 72
Justin Gaethje tells Conor McGregor to wait his turn
SportsJOE 2000s Football Quiz | Round 3
Only a true nerd will get full marks in our 2016 football quiz
The SportsJOE 12 o'clock quiz | Day 71
QUIZ: Correctly identify these World Cup 2014 players from their stickers
You may also like
1 day ago
You'll be hard pushed to get full marks in this Serie A quiz
1 day ago
Nigel Owens on how the O'Driscoll and O'Connell captaincy dynamic worked
2 days ago
Tadhg Beirne on the Wayne Pivac request that helped change his career
5 days ago
Baz & Andrew's House of Rugby - Tadhg Beirne and John Cooney
1 week ago
'We knew how much it meant to them' - Conrad Smith on Croke Park history lesson
1 week ago
"I was like, 'Your ribs will be broke, alright, if I get my hands on you again!'"
Next Page