Joe had his favourites.

It can't be denied that there were certain players in Joe Schmidt's reign that needed to be shy of a limb in order to be dropped. In fact, Conor Murray tested that to the nth degree when he played most of the 2016 Six Nations clash with Wales with an arm injury. Mainstays such as Murray, Johnny Sexton, Rob Kearney and Rory Best have taken much of the flak in the fallout from Ireland's World Cup horror show. 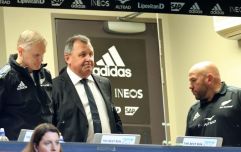 The back-story to that painfully awkward Joe Schmidt handshake

END_OF_DOCUMENT_TOKEN_TO_BE_REPLACED

But is it fair?

There were increased calls throughout the year for players like Jordan Larmour, Joey Carbery and Andrew Conway to start based on their form and youth, but they fell largely by the wayside as the Irish team that Schmidt started in the Quarter Final against New Zealand showed only 3 changes from the one that beat them in Dublin 11 months ago.

Speaking on The JOEpan Rugby Show this week, former Munster and Ireland hooker Jerry Flannery made the point that it was these players that raised Irish hopes in the first place:

"The reason that we had such expectation going into the World Cup was off the back of the selections that Joe made. So to say that it actually killed us in the end, well it's what built up the expectation is those players delivering over those six years. I suppose in hindsight you look at it and you go, could we potentially have had a little bit more creativity in the team?" 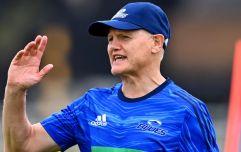 END_OF_DOCUMENT_TOKEN_TO_BE_REPLACED

The lack of creativity was clear in Ireland's attack throughout the tournament, and a lot has been made of the teams still left in Japan using playmakers across their backlines; England with George Ford and Owen Farrell and New Zealand with Mo'unga and Beauden Barrett come to mind. But, as Fla pointed out, the potential for Schmidt to do the same was massively stunted by an injury to one player in particular;

"The guy that stands out for me is Joey Carbery, and I know that Joe would be a big fan of Joey's and would see what Joey can give you on the field and having his creativity along with Johnny Sexton would make us a far, far mroe dangerous team. But I think the reality is that Joey missed the last 6 Nations, and you saw that Joe did try and spread some game time. Jack Carty played quite a lot in the Six Nations but we didn't get Joey on the field enough. And then in the World Cup warmups, I thought Joey had an outstanding game against Italy, and he was injured then and we didn't see him then until he came in for the third game."

On Episode 9 of The JOEpan Rugby Show, Rob O'Hanrahan and Jerry Flannery take a look back at the pitfalls of Ireland's 2019 World Cup and preview England v New Zealand in the semi-final. WATCH at the link below:


popular
Roy Keane's issue with Argentina star could rival Graeme Souness and Paul Pogba
'I was so stressed the week before the All-Ireland and I ended up having a panic-attack' - O'Shea and O'Sullivan open up
Roy Keane cracked up Ian Wright and Gary Neville with England team spirit remark
Roy Keane takes moment on TV to pay tribute to his old team in Cork
The nine England World Cup footballers who could have played for Ireland
Lionel Messi makes Gary Neville eat his words after "silk pyjamas" comment
Roy Keane shoots down ITV presenter's 'excuse' for England's draw with USA
You may also like
11 months ago
Joe Schmidt set for job with All Blacks as Grant Fox steps away
1 year ago
'Joe Schmidt would do wonders with the All Blacks'
1 year ago
"It wasn’t worth the hassle" - Darren Cave on relationship between players and media
1 year ago
Warren Gatland pulls Joe Schmidt into Lions Tour refereeing drama
1 year ago
When Gordon D'Arcy brought a coffee to a Joe Schmidt walk-through
2 years ago
"I thought it was just a nonsense, until I got out to Japan and suddenly realised"
Next Page