'No matter what you try to do as a coach, you can’t create courage' - Joe Schmidt

We are cramped in a corridor just around from the white-walled staging area for the post-match mixed zone.

Jonny May, Chris Robshaw and Dylan Hartley are out speaking to the English press but the guts of the Irish media contingent are waiting for the Grand Slam winners to emerge from a victorious 'Away' dressing room for a chat.

The 'dailies huddle' includes writers from seven Irish newspapers and two websites [including ourselves] and we are getting in the way. So is Joe Schmidt and Ireland's communications' chief David O Siochain. The likes of Hartley and Robshaw have to squeeze past and keep it zipped. The RFU media team are not happy about the impromptu Irish media gaggle blocking the corridor and we are scolded in hushed tones on a couple of occasions.

END_OF_DOCUMENT_TOKEN_TO_BE_REPLACED

For England, the Six Nations was not supposed to end this way.

For Ireland, well, they are taking it as it comes. They are champions again and Schmidt has every right to hold court. Forget the setting, it's the words that will be remembered.

The first question is - like some of life's great questions - something that will long be debated and will never be truly settled: "Is this as good an Ireland team as you've ever had?"

"The first one was special, winning in Paris as we did.

"As I said during the week, I felt that when we lost 13-10 back in Twickenham it was a massive Test match and I just think that we managed to get the right side of the ledger today and we didn't that time.

"It was a different generation of players, the quality of the Paul O'Connells, Brian O'Driscolls, the Gordon D'Arcys, it was that generation that was a little bit special. Now, to dove-tail into a cross-over of a newer generation is a little bit exciting, it's a little bit daunting because where do they go next?"

Where to next? Schmidt may have been pondering Australia, this summer, but the majority of players and fans were purely fixed on celebrating Ireland's third ever Grand Slam. 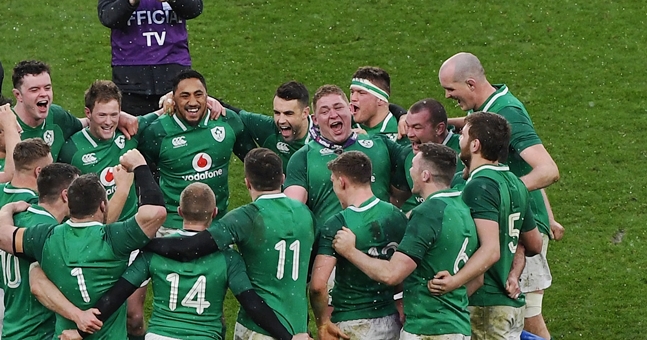 END_OF_DOCUMENT_TOKEN_TO_BE_REPLACED

The trip Down Under is already bubbling away in Schmidt's mind but there was still time to reflect on his greatest coaching achievement. It must be hard to top a Grand Slam?

"Yeah, it’s hard to equate anything with this. When I was a kid I used to watch Five Nations on TV and think these places were on a whole different planet with those massive crowds. It’s pretty hard when you’re born in Kawakawa, 1400 people and you’re shifted to the metropolis of Woodville, 1600 people, it’s huge.

"This is massive and it’s massive for the group of players that we’ve got. I’d have to say I’ve been incredibly fortunate to be involved in some great management groups and some great coaching groups and even more so the players themselves.

"No matter what you try to do as a coach you can’t create courage. You can try to add to character or build on character but there’s got to be the character there to start with and they definitely demonstrated that today."

Courage was definitely on show at Twickenham, in absolute abundance. Whether it was Iain Henderson landing 22 tackles, Keith Earls missing an intercept yet still spinning to make a tap tackle, Garry Ringrose taking on big lock George Kruis or sub Sean Cronin bundling Mike Brow over the sideline to prevent a score, it was on show all afternoon.

Grand Slam champions. Six Nations champions. Second in the world and 12 wins on the bounce.

It is the best but it can still get better. Joe Schmidt knows it and that's what drives him on.


popular
"It's giving the Kerry team a bad image. They don't look like footballers, they look like gurriers." - Liveline has peaked
Bundee Aki overheard in the stands after Faf de Klerk hit on Conor Murray
Eoin Murphy's calls from the goals show Cork they're in for a completely different ball-game
"That's one of the best races I've ever had" - Coscoran kicks like a demon to seize the day
Gatland on his decision to start Bundee Aki, and drop Tadhg Beirne
The SportsJOE 12 o'clock quiz | Day 377
Aidan O'Shea better get to a telly soon after his All-Ireland semi-final admission
You may also like
6 days ago
Ireland's rowing heroes on what everyone was shouting as they beat Team GB to bronze
6 days ago
"Hopefully it gives young girls real hope that anything is possible. If we can do it, anyone can!"
2 weeks ago
Football is coming to its 'real' home as Dublin set to host major tournament final
3 weeks ago
Full Ireland ratings as Ronan Kelleher inspires USA thrashing
1 month ago
Pre-match comments about Josh van der Flier put performance into perspective
1 month ago
Full Ireland ratings as Andy Farrell's men survive one hell of a scare
Next Page