"Who said that?!" - James Lowe thriving on tough love that would bruise others

"Andy said it? He said it twice? I'll have to have a word with him!"

James Lowe took Andy Farrell's weight comments in good nature. In fairness, it is always easier to absorb an off-kilter comment after running for 130+ metres, making four line breaks and scoring a try. At least that's what they say.

Following Ireland's 60-5 torching or Japan, last Saturday, head coach Andy Farrell was not dancing around his words as he discussed Lowe's return to international form.

"James had a little bit of a wake-up call," Farrell began. "He went away and understood how he needed to prepare for international rugby. His preparation is through the roof in comparison to what it was before. He’s learned the hard way. There’s a few things that he needs to get better from today as well but his attitude is in the right place.

END_OF_DOCUMENT_TOKEN_TO_BE_REPLACED

Lowe struggled with a couple of niggling injuries in 2020 and it saw him lose his edge. In Test rugby, that lack of sharpness was exposed in defence. Not running full clip to get back and cover and pretty quickly cost you seven points, and more, against the top sides.

The 29-year-old got most of those fitness issues squared off, over the summer, and has looked back to his best for Leinster, and now Ireland [albeit with two bigger Tests ahead]. "At least he could have told me to my face!" Lowe remarked as he chewed over Farrell being in a sharing mood with the press.

On the latest House of Rugby URC episode [LISTEN from 32:30 below] Leinster and Ireland star Devin Toner joined the gang as they debated if Lowe should be in the back three against the All Blacks. 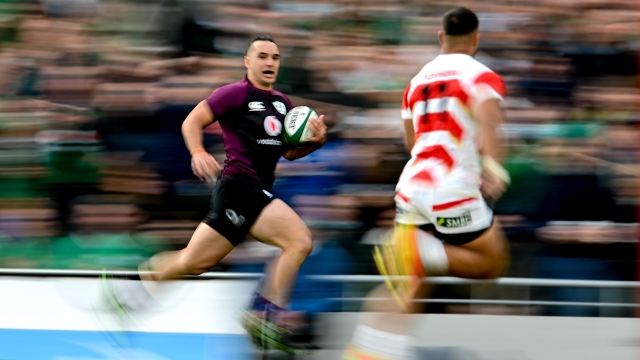 Shaping up to be James Lowe vs. Simon Zebo

With Jacob Stockdale out, it would like like James Lowe vs. Simon Zebo is the battle for the Ireland No.11 jersey.

END_OF_DOCUMENT_TOKEN_TO_BE_REPLACED

Keith Earls is adept at covering both wings, so is a live option, while I believe Jordan Larmour's form and talent means he should be accommodated on either wing when New Zealand come to the Aviva Stadium. Mack Hansen and Robert Baloucoune are also in the squad.

Andy Farrell names his team to face Ian Foster's ABs on Thursday afternoon and Toner would stick with that back three of Lowe, Andrew Conway and Hugo Keenan at fullback. He said:

"James had such a great game against Japan. I think he offers a lot more with his boot, as well. He's got a cannon of a left boot, so that's a good option for your exits, too.

"He obviously grew up in New Zealand and played for the Maoris... that'll be that little bit of insider knowledge, maybe. So I think it would be unfair not to [start him]."

From the moment he arrived to Ireland, in 2017, there was much anticipation about Lowe making a splash in the green jersey. Anyone that watched him tearing it up for Leinster would have never had a doubt his Test days were coming.

After a great start against Wales, the gradient climbed and Lowe struggled to keep pace. Fit again, sharper again, scoring tries and breaking tackles again. Lowe is ready to show us all what he can really do at this level.

All he needs now is for Hugo Keenan to start passing to his left...

Then we're really in for a show.


popular
Roy Keane handled Gary Neville’s goal celebration as most Irish fans would
Roy Keane cracks up ITV pundits with description of Senegal supporters
World Cup 2022 Day 15: All the major action and talking points
Damien Duff makes 'brutally honest' England World Cup prediction after Wales win
France demand FIFA change result of World Cup defeat over 'rule break'
From Ireland to Argentina: Alexis Mac Allister's Irish roots explained
Ronaldo finally reveals why he got that hideous haircut
You may also like
2 days ago
Shay Given on how far Ireland could've gone at the 2002 World Cup with Roy Keane in the team
3 days ago
From Ireland to Argentina: Alexis Mac Allister's Irish roots explained
1 week ago
Former England international admits he wishes he had played for Ireland
2 weeks ago
Two baffling omissions as four Ireland stars make World Rugby 'Dream Team' of the Year
2 weeks ago
Josh van der Flier claims World Rugby Player of the Year at Monaco ceremony
2 weeks ago
"Highlight of my Ireland career" - Behind the scenes as Jack Crowley and Ross Byrne covered for a legend
Next Page