Jacob Stockdale scores another brilliant try for Ulster against the Scarlets

Jacob Stockdale's try in Ulster's 25-24 win over the Scarlets last Friday night was undoubtedly one of the highlights from a very tight game in Llanelli.

Stockdale took off down the left wing in the first-half and beat two defenders to score one of the finest tries he's notched in his burgeoning Ulster career.

The 23-year-old had scored 23 tries in 48 matches for Ulster heading into Friday night's return leg in Belfast and he scored another fantastic try after latching onto Billy Burns' chip kick with the scores tied in the second-half.

Jacob Stockdale does it again for Ulster 🔥 pic.twitter.com/kuyExArnLI

Iain Henderson had crossed for Ulster's first try of the game to give the hosts a commanding 10-0 lead after an early John Cooney penalty opened the scoring for the Irish province. 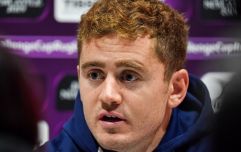 END_OF_DOCUMENT_TOKEN_TO_BE_REPLACED

Wales and Lions centre Jonathan Davies hit back for the Scarlets after an opportunistic rebound off the upright before Stockdale then restored the lead with this exceptional score.

Henderson and John Cooney both added tries later in the game as the hosts secured a bonus point win.