The reaction of several Leinster players, at full-time, shows how fondly regarded the Ulster winger is.

"Is there an update on Jacob Stockdale?" Ulster head coach Dan McFarland was asked, after the Ireland international injured his ankle in a home loss to Leinster, on Friday.

McFarland was already shaking his head. "No," he replied, and nothing more was offered.

END_OF_DOCUMENT_TOKEN_TO_BE_REPLACED

After playing 113 games in four hectic seasons, for Ulster and Ireland, Stockdale had a break away from the game that gave him a sense of perspective of his rugby journey. It was not the type of break he had planned or wanted - as he underwent surgery on a badly injured ankle - but he was determined to use the time wisely and get back to his best.

Stockdale was back in Ulster white for pre-season and started three United Rugby Championship matches in a row in the 11 jersey. He was going well against Leinster, for 30 minutes, when injury struck again. By full-time the mood was darker than when he sat down with the province's media team for a match preview chat.

"It was a tough year," Stockdale told Ulster Rugby, "having to watch the lads play and not be involved in the game. To be back on the pitch and have three games under my belt now is [great, and] hopefully I can get a few more...

"Friday night, it's going to be a great game. I'm looking forward to it, and can't wait to get out there." 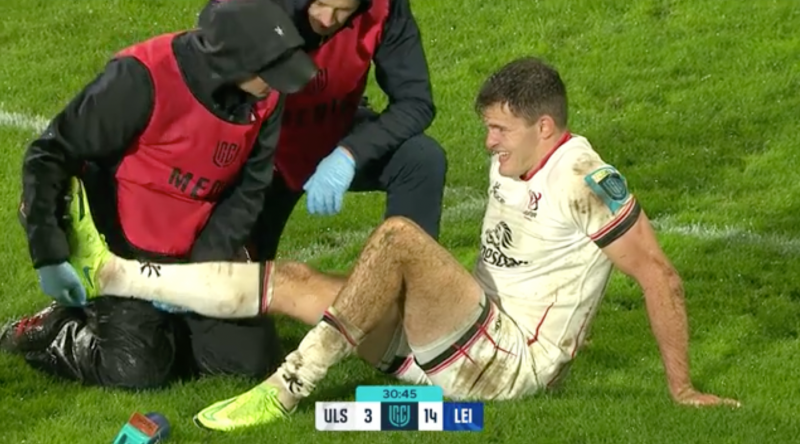 END_OF_DOCUMENT_TOKEN_TO_BE_REPLACED

Just before the half-hour mark, Luke McGrath tossed a pass back to Leinster teammate Ross Byrne, who then sent up a spiralling high ball into the Ulster 22.

The ball was knocked on by Garry Ringrose, with Jacob Stockdale pouncing and looking to get motoring up the left wing. He was scragged by Jimmy O'Brien, though, and his legs caught under the Leinster fullback before he fell to the ground.

END_OF_DOCUMENT_TOKEN_TO_BE_REPLACED

Jacob Stockdale was able to get back into the Ulster backline as they sought to clear their lines, and it was his booming hoof up the sideline that got the home side a considerable stretch up the other end of the park.

As soon as he had cleared his lines, though, the 26-year-old went to ground and play was held up for a couple of minutes as he got treatment on the pitch. He was able to see out the half, but was replaced at the break by Ben Moxham. Ulster ended up losing 20-13 as Leinster went top of the URC table for the first time this season.

Following the game, Johnny Sexton and Josh van der Flier led the line of Leinster players seeking Stockdale out to get an update on his injured ankle. Sexton initially looked concerned, but his demeanour brightened after sharing some words with his Ireland teammate.

Sexton and van der Flier both showed a lot of concern for Stockdale, after the game

Fingers crossed it was just a sprain pic.twitter.com/Oz6IDhkQYP

Sexton regards Stockdale fondly and said this about the winger, in 2020, "We just need him to keep being himself, because we saw what he can do against Italy... I remember a couple of years ago playing the (Champions Cup) quarter final with Leinster and he was probably the best player on the pitch that day. Outstanding in the air. Attacking."

With several Ulster players off on tour, in South Africa, with Emerging Ireland, Dan McFarland, and all involved with the club, will hope Stockdale is good to go again, soon enough.

Until an official update arrives, on Monday, the fact that Stockdale was still in his match boots, and not in any protective casing, is an optimistic crumb.


popular
Talksport presenter puts Martin O'Neill to the pin of his collar over Declan Rice and Jack Grealish
Roy Keane scores winning goal past Micah Richards in ITV v BBC pundits match
World Cup Power Rankings: The top eight pundits of the tournament so far
Gary Neville sticks up for Ronaldo as contextless pictures and videos taken as gospel
World Cup Power Rankings: The top 10 players at the tournament ahead of the quarter-finals
"There's no soccer, hurling, or rugby" - Kilcoo's secret to success
Ballyhale's Colin Fennelly felt Ballygunner's victory speech was disrespectful
You may also like
2 weeks ago
Alternative World Rugby Dream Team selected, with two extra Ireland stars
2 weeks ago
"Two Irish players are best in the world" - Rugby reacts to big Josh van der Flier and Terry Kennedy awards
2 weeks ago
Two baffling omissions as four Ireland stars make World Rugby 'Dream Team' of the Year
2 weeks ago
Josh van der Flier claims World Rugby Player of the Year at Monaco ceremony
2 weeks ago
"Highlight of my Ireland career" - Behind the scenes as Jack Crowley and Ross Byrne covered for a legend
2 weeks ago
Bundee Aki reminded us all of his best qualities, on a night Ireland couldn't do without him
Next Page