In among an injury update for nine other players came the grim confirmation.

Saracens have confirmed that back-row Jackson Wray fractured his skull in their weekend win over Northampton Saints.

Sarries defeated Saints 30-6 but Wray, who came on as a half-time replacement for Billy Vunipola, appeared to injure himself while making a tackle, late on.

The 31-year-old was somehow able to finish out the game, but the club have now provided an update that does not read well. In their player injury update, the line on Wray states:

'Seeing a consultant this week after suffering a fracture in his skull last weekend against Northampton Saints.'

Wray, who has been with Saracens since 2009 and stayed with the club during their short stint in the Championship has since posted a message to his followers on his condition. 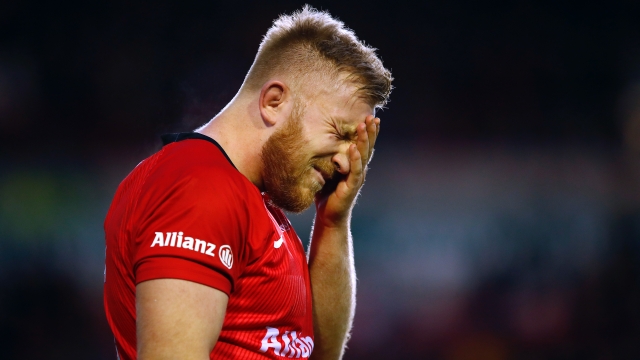 Wray signed from Bedford Blues over a dozen years ago and has played a key role in the five Premiership titles and five European Cup triumphs with the club.

'Thanks for all the messages guys,' he wrote on his Twitter account. 'Injuries are unfortunately part of the game we love. Look forward to being back on the field with the boys!'

Thanks for all the messages guys, injuries are unfortunately part of the game we love. Look forward to being back on the field with the boys!

END_OF_DOCUMENT_TOKEN_TO_BE_REPLACED

Skull fractures are not entirely uncommon in sport. There was an infamous incident in 2008 when Wales centre Jamie Roberts, who was studying for his medical degree fractured his skull in a Test match against Australia and self-diagnosed before leaving the field of play.

Wolves striker Raul Jimenez fractured his skull in a Premier League game against Arsenal, in November 2020, but was able to return to play, eight months later. The Mexican wears protective head-gear when playing for Wolves now.

Elsewhere in the Saracens update, the club stated that Duncan Taylor has undergone shoulder surgery and is not expected back until March. That would rule him out of Scotland's upcoming Six Nations campaign. There was better news on Owen Farrell [ankle], who is expected back mid January.


popular
Mario Balotelli, Luis Suarez, Fernando Torres and why Rio Ferdinand "hated them"
"I remember just hugging this Irish guy" - How one Kiwi rugby star reacted to Ireland's historic series win
"I don’t trust you" - Joey Barton delivers brutal dismissal of Irish defender
Down county football is in tatters, but Conor Laverty is the man to piece it back together
Gatecrashed interviews and chip-shop previews - Wexford GAA's online coverage sets the standard
"I'll ask for everyone that comes to the game to wear purple and roots for us" - Pat Fitzgerald
Javier Hernandez offers to play for Manchester United for free
You may also like
2 days ago
"Everything’s done for you" - Eddie Jones on how private schools influence English rugby
4 days ago
Faf de Klerk knocked out after horror collision with knee of All Blacks winger Caleb Clarke
4 days ago
"We'll support him in any way we can" - Wallabies captain Michael Hooper backed for brave mental health decision
1 week ago
At a time when rugby needs genuine characters, Naitoa Ah Kuoi could not have timed it better
1 week ago
Eight Ireland players make final cut in 'World Class' 33-man squad selection
2 weeks ago
"There's no magic wand. A lot of it starts and finishes with hard work" - Ronan O'Gara
Next Page