'Not seeing Johnny Sexton in the warm-up... '

So began the murmurs and tweets at Aviva Stadium, on Saturday evening, as kick-off against Australia drew closer. Jack Crowley, for a lad that was supposed to be on the replacements bench, was suddenly getting a lot of quiet words and back-slaps.

Sexton had been out, earlier in the evening, for some warm-ups and he had met the young mascots that he was set to be leading out onto the Lansdowne Road pitch. They had even accompanied the Ireland captain for the coin toss with his counterpart, James Slipper. 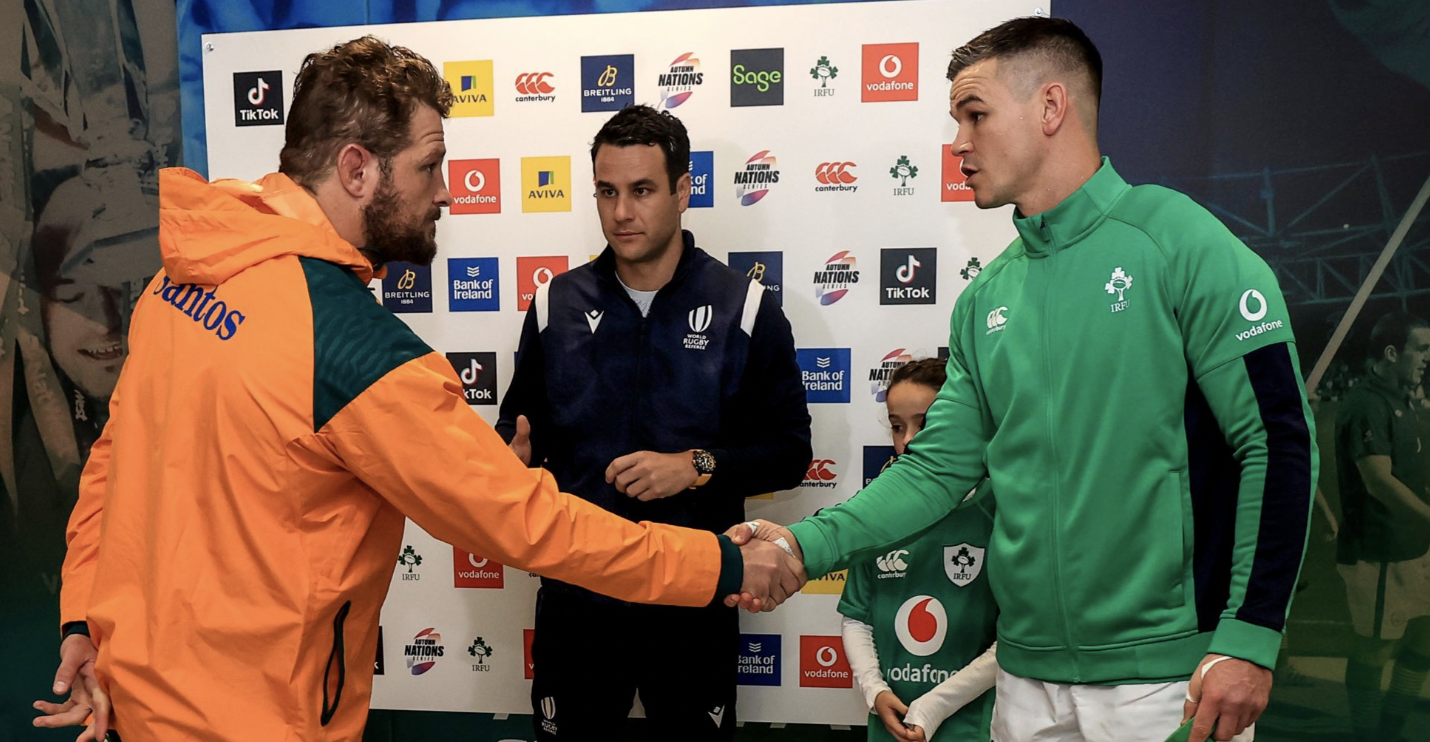 Jack Crowley gets the call

END_OF_DOCUMENT_TOKEN_TO_BE_REPLACED

An hour before kick-off, the media is handed around printed out team-sheets for both sides. More often than not, they confirm the XVs and replacements that were named earlier in the week.

Occasionally, though, there are late changes. Matt O'Connor's Leinster were notorious for them - there seemed to be a late line-up or subs change every second game.

END_OF_DOCUMENT_TOKEN_TO_BE_REPLACED

Once that confirmed team-sheet comes through, there are rarely changes before kick-off. Of course, it did happen in 2017 when Jamie Heaslip's back seized up and Peter O'Mahony was drafted into the Ireland team to face England. O'Mahony and Ireland were brilliant, that day, England were denied a Grand Slam and the Cork native got himself a Lions call-up.

With 20 minutes before kick-off, it felt as if people were just being pessimistic on Sexton. Even if he was feeling tight, there was some logic to the outhalf going easy on warm-ups and just trying to get through the game itself.

Then came the conformation, tweeted out at 7:43pm (17 minutes before the game started), that Sexton was out. Jack Crowley took his starting spot and, while he was at it, his match jersey:

That's how late and unexpected the change was pic.twitter.com/aHcD3LMq5z

END_OF_DOCUMENT_TOKEN_TO_BE_REPLACED

Jack Crowley was making just his second Test outing, after appearing off the bench in last weekend's win over Fiji. The 22-year-old was in for his first Test start, after inheriting the jersey of a living Irish rugby legend. No pressure.

For the anthems, and formalities, the Cork native was placed in between the two men that would do a lot to talk and help him through the game, Stuart McCloskey and Garry Ringrose. After that, it was up to Crowley.

He had a solid game. Some good moments, tidy for the most part, and it will stand to him over the coming weeks and months. Sexton, whenever he does retire, will leave a chasm that will be hard to fill. Crowley was far from perfect, but he handled the occasion well and showed promising signs.

Following Ireland's 13-10 victory over Australia, delivered by a late Ross Byrne penalty, we spoke with some of the key figures around a frantic and tense night for the World No.1s. 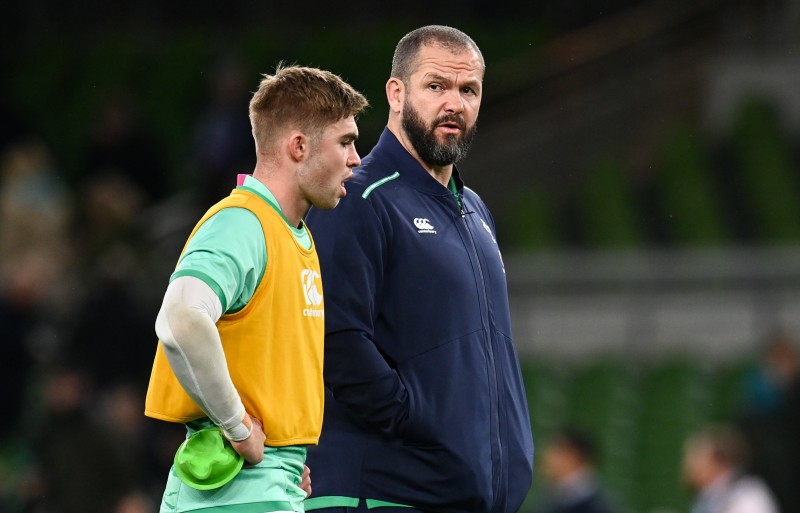 "Johnny went out to do some kicking before the warm-up and felt something going on with his calf and he tried his best to get right but the right choice was not to play and it was great for us, in so many ways, for Jack Crowley to get the start.

"It wasn’t just to see how Jack would handle that situation but how we handled it as a group to help Jack out and I thought the kid stood up tall."

"It’s awesome for Ross Byrne," Farrell added. "I was absolutely delighted for him. You know Ross' temperament, it’s made for him that type of situation where it’s deadlocked.

"It was a tough enough kick when the penalty came but there was no doubt in Ross’ mind that he was ever going to do anything but go for the three points, so fair play to him. He's waited for that chance and he delivered it and got us over the line." 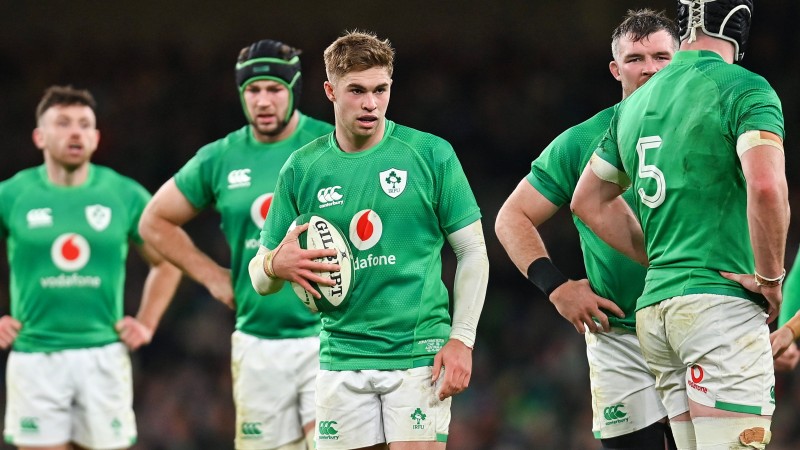 "We were all conscious that we wanted to make him feel a million dollars. Sometimes that's just a little squeeze of the arm, or pat on the back. And he knows, then, that you're there.

"The most important thing is your actions as a group - from a forward pack or leadership group. They weren't always up to scratch, but we always had his best interests at heart.

"It's a big ask for a young man to come in and play 70 minutes against a team as good as that, and to come out on top. Look, it's easy to see - he's a good kid. He's hungry to learn, he's hugely ambitious, he's no fear of asking questions or saying the wrong thing. And it's refreshing to see, someone at that age getting stuck in, enjoying it and putting a performance like that in. It's great for him."

"It has been topsy-turvy. I’m actually still full of adrenaline - I couldn’t really calm down after it. It’s right up there, it’s what you dream of. They’re the moments, as a kid, that you want.

"I don’t really know how to put it into words. It’s been one of the most bizarre weeks ever. I got the call on Monday after Leinster training, came in Monday night as cover, did the warm-up today and then got the call when Johnny pulled up.

"I was actually kicking with Johnny, and he had a bit of an issue and went in, and then I was on the bench. I suppose when the game is that close, you’re preparing yourself for that moment, or hoping you get that moment, and thankfully it came."

What a kick that is to give Ireland the lead!

And just a little reminder of his talents at the end of this series!

On his late penalty, which put Ireland 13-10 ahead, Ross Byrne was insistent that he would go for the posts.

"Nothing different to what I’d normally do for any kick in any game. I just trust the process that I have, it’s been pretty good to me in the last number of years. Referees will do that to me a bit sometimes, so it’s something I’m kind of used to. It doesn’t faze you when it happens, it probably makes the mind go blank, if anything."

"[Not being selected for recent Ireland squads] has been frustrating," Byrne added. "I haven’t been in the squad for a while, but I think the season has gone well for me at Leinster.

I just have to try and kick on. I’ve had to be patient, and sometimes you need a bit of luck, I got that and got the opportunity today.”

“It’s given me a taste of it. Obviously I haven’t been in the squad for quite a while so to be called in and just to be back in the squad was brilliant. Then to get a chance in the matchday 23 was amazing as well, and then to have an opportunity to take a kick like that."

BEHIND THE SCENES FOR IRELAND 13-10 AUSTRALIA

You may also like
6 days ago
Shay Given on how far Ireland could've gone at the 2002 World Cup with Roy Keane in the team
6 days ago
From Ireland to Argentina: Alexis Mac Allister's Irish roots explained
1 week ago
Former England international admits he wishes he had played for Ireland
2 weeks ago
Two baffling omissions as four Ireland stars make World Rugby 'Dream Team' of the Year
2 weeks ago
Josh van der Flier claims World Rugby Player of the Year at Monaco ceremony
2 weeks ago
Bundee Aki reminded us all of his best qualities, on a night Ireland couldn't do without him
Next Page