Saturday, November 17th 2018 will go down as one of the great nights at Lansdowne Road (the Aviva Stadium) for many years to come.

END_OF_DOCUMENT_TOKEN_TO_BE_REPLACED

Ireland stepped up to face New Zealand, the world number one side and two-time reigning world champions, and a side that had not lost in Europe in six years. Joe Schmidt's men are Grand Slam champions, of course, but toppling the All Blacks at home for the first time in Ireland's rugby history would still be a mighty task.

The first half was an absolute war but Ireland got daylight between both sides when Jacob Stockdale scored a wonder try, early in the second half. Ireland deserved their 16-9 lead but were forced to dig in for the final quarter. All 23 players were required to front up, and that they did.

Following the final whistle, and a mini lap of honour, the Irish players all headed back to the dressing rooms to toast their victory together.

It did not take long before several New Zealand players knocked for admittance. A couple of drinks were shared but they were brief enough moments. Both sets of players agreed they would all catch up properly at the post-match banquet at The Shelbourne Hotel.

A few players traded jerseys, with TJ Perenara swapping with Bundee Aki and Damien McKenzie getting hold of (his opposite number) Rob Kearney's No.15.

Post-match media and corporate duties done, the All Blacks were first to leave the ground to head towards The Shelbourne. Ireland were not far behind.

Outhalf Cathal Marsh was in touch with his friends, and former Leinster teammates, Luke McGrath and James Ryan afer they helped down the All Blacks. He told Baz & Andrew's House of Rugby some details of what sounds like an epic night. 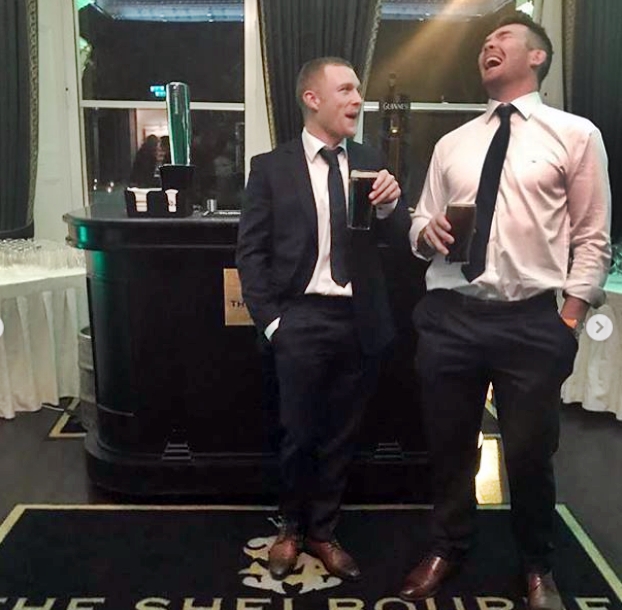 END_OF_DOCUMENT_TOKEN_TO_BE_REPLACED

Marsh watched the 16-9 from home, as he prepares for his move to Rugby United New York, and was loving the performance, and fist pumps, of his former Leinster teammate Johnny Sexton.

"I think he is one of the only 10s who can be a bit insane and play on the edge, and still make the right decisions," said Marsh.

As for the likes of McGrath and Ryan, Marsh was kept abreast of their movements after the banquet wrapped up. The night, it seems, was still young. Marsh commented:

"Luke ended up in a traditional bar that was playing Irish music, at one stage, with a few of the other players and a few friends. It seemed like a really good night."

McGrath and his Irish teammates were joined in that trad bar by none other than Irish footballing legend, and the nation's all-time leading goalscorer, Robbie Keane. The Dubliner likes a good trad session himself and helped the Irish boys sing along to some of the classics, from the Wolfe Tones and The Dubliners.

Ireland's rugby stars rightly took front and centre at the weekend and it was so nice to see sporting stars of the previous generations paying homage to Joe Schmidt's remarkable set of men.

Take it as read.

Heady days for Irish rugby. Great to see the likes of Robbie Keane and Paul McGrath are fully behind this Irish team.


popular
GAA club transfers that shocked the county: Jason Sherlock
Fermanagh footballer opens up about losing her mum to suicide and urges people to seek counselling
Here's all the GAA games on the tube this weekend as the provincial championship heats up
Jordan Larmour enjoys satisfying bit of revenge on Mack Hansen
Ruesha Littlejohn gate-crashes Katie McCabe's interview after another player-of-the-match display
Ronnie O'Sullivan on why he staged sit-down protest during UK Championship defeat
Roy Keane's three leadership tips he gave to Owen Farrell can't be argued with
You may also like
1 week ago
"I've had stick my whole career" - Mike McCarthy on 'Plastic Paddy' jibes and singing the anthem
1 week ago
"Just brilliant" - Alex Goode backs Caelan Doris for 'Best Player' award
1 week ago
Sean O'Brien praises "unbelievable" Robbie Henshaw after his winning return
1 week ago
Four Ireland stars voted onto Autumn Nations Series 'Best XV'
1 week ago
Sean O'Brien on rugby league star he'd love to get in a boxing ring against
1 week ago
Joey Carbery puts himself in position to end odd Six Nations streak
Next Page