The Ireland coach now knows what he is working with.

Andy Farrell has named a 37-man Ireland squad for the opening rounds of the 2022 Six Nations. The injury Gods have been kind enough, but we still have two weekends of games before we get to the championship launch.

James Lowe has been ruled out with a muscle injury and Will Connors [hamstring] are out of contention, for now, but James Ryan [hamstring], Tadhg Furlong [calf] and Joey Carbery [elbow] are all included. Farrell will hope each man, along with Iain Henderson, can get some provincial minutes under their belts in the coming weeks.

Now that the squad has been named, and we can see what Farrell has to work with, we looked ahead to the February opener with Wales to predict his starting XV. There are several key positions up for grabs. 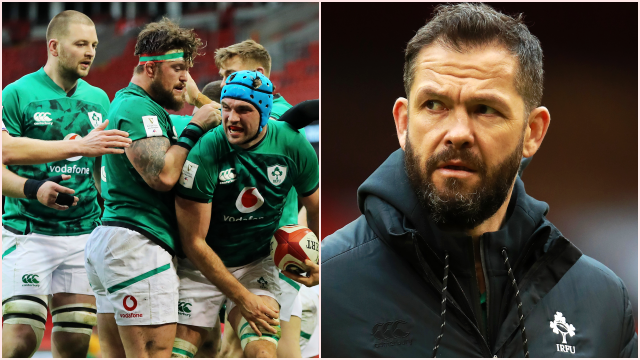 Starting with the pack, there appear to be only two positions up for debate - openside and second low.

END_OF_DOCUMENT_TOKEN_TO_BE_REPLACED

Peter O'Mahony would be itching to get another crack against Wales, especially after his red card against them in the 2021 Six Nations. The Munster captain may have to settle for a replacements role, though, as Josh van der Flier gets the start along with Caelan Doris and Jack Conan.

In the second row, Tadhg Beirne simply has to start. He is Ireland's form forward and has been for the past 18 months. The big debate is who starts beside him. While we would just about go for Iain Henderson, we can see Andy Farrell going with James Ryan.

In the backs, there are two debating points again. Half-backs, right wing and fullback are all pretty much locked in, barring injuries.

As a nation, we don't often have the luxury of Robbie Henshaw, Bundee Aki and Garry Ringrose being fit at the same time. That looks to be the case, as it stands, and James Hume is in superb for. Past selections when all three were available would point towards Henshaw-Ringrose, but we have an inkling that Aki will be involved from the start.