These are the men Andy Farrell will hope can get Ireland off to a flyer.

The Ireland squad for the opening round of the 2022 Six Nations has been announced, and it has a very settled feel to it.

Johnny Sexton is captain of the 37-man squad named by Farrell, with a few exciting inclusions in the backs. James Hume, Robert Baloucoune and Mike Lowry of Ulster are all there, as is Mack Hansen of Connacht.

END_OF_DOCUMENT_TOKEN_TO_BE_REPLACED

Jack Carty is set to deputise Sexton for the opening rounds, although Joey Carbery is also named. Lowry can also cover outhalf and fullback.

In the pack Ulster lock Kieran Treadwell gets a call-up, as does Nick Timoney and Munster back-row Gavin Coombes. Connacht flanker Cian Prendergast is included as a development player. 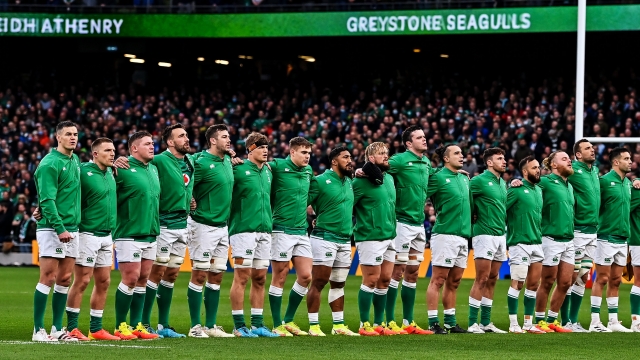 The Ireland players line up before their November 2021 win over New Zealand. (Photo by Brendan Moran/Sportsfile)

END_OF_DOCUMENT_TOKEN_TO_BE_REPLACED

Ireland went into the 2021 Six Nations with high hopes of capturing the title. Their campaign got off to a tough start, though, when Peter O'Mahony was red-carded early in an agonising away loss to Wales. They then looked flat in a disappointing home loss to France and were out of the running.

There were wins away to Italy and Scotland to lift Irish spirits, but the result and performance that got everyone invested again was a rousing victory over England, at the Aviva Stadium.

Farrell's side then had comfortable home wins over Japan and the USA, last summer, before defeating Argentina, Japan and New Zealand in the Autumn Nations Series.

They open up the 2022 championship with a home tie against Wales. They then travel to France, host Italy, face England at Twickenham and close out against Scotland in Dublin.