The Ireland team that should start against Wales

The team we are selecting is based on three players shaking off knocks and strains and Robbie Henshaw missing out completely.

Ireland are Six Nations leaders after two rounds of matches. They lead England, the only other team still capable of winning a Grand Slam, by points difference and both sides are not due to meet until the final round, on March 17.

Following Ireland's 37-point win over Italy, on Saturday, head coach Joe Schmidt was asked if he sensed his side were building momentum nicely.

"You do feel that you're in with a chance when you can get those first two wins," he replied, "especially with an away win first up.

"We haven't lost a Six Nations game at home in the five years I've been involved [with Ireland]. There's a real benchmark there that we can hopefully defend.

"We probably had a couple of knock-backs injury-wise today. It's a bit of a wait and see, really."

The wait and see manly revolves around Robbie Henshaw, who is off for a scan on his injured shoulder, and Tadhg Furlong. The tighthead prop lasted only three minutes of the game but Schmidt was giving nothing away, saying is withdrawal was only "precautionary". 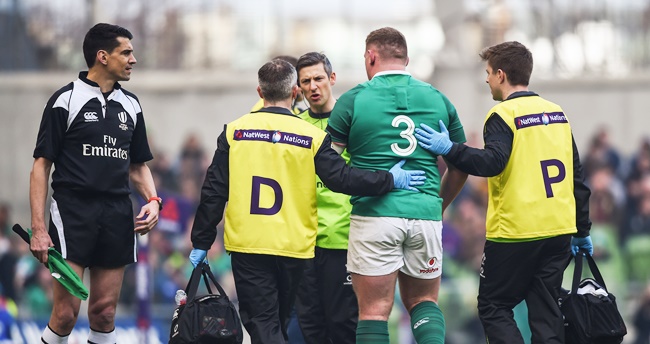 The silver lining was the 77-minute shift of Leinster's Andrew Porter in the tighthead role. Schmidt said it was 'a super effort' and he will push Munster's John Ryan for that No.3 jersey if Furlong must sit out the February 24 visit of Wales to Dublin.

The other players that took knocks were Johnny Sexton and Jack Conan but both men are expected to remain in the squad and train down in Athlone - at Buccaneers RFC - later in the week.

Ireland will, next weekend, name an extended squad of players for rounds three and four of the competition. The likes of Niall Scannell, Darren Sweetnam, Dave Kilcoyne and Craig Gilroy, who scored a hat-trick for Ulster on Friday, will all be hoping for a call-up while Munster's Jack O'Donoghue could come in as back row cover.

END_OF_DOCUMENT_TOKEN_TO_BE_REPLACED

Schmidt also raised the possibility of Sean O'Brien and Garry Ringrose being drafted into the squad.

We are going on the likelihood that Henshaw will at least miss the Wales game and that Ireland's other concerns will be available after getting next weekend off. To that end, we are making just three changes from the Ireland team that started against Italy.

Chris Farrell comes in at outside centre for Henshaw, James Ryan returns to the second row and CJ Stander gets the start at No.8.

On the bench, Cian Healy remains as loosehead back-up, Porter edges out Ryan, Ultan Dillane [off on bereavement leave this week] is second row back-up and Andrew Conway is covering the back three.


popular
QUIZ: Name every player that's scored three or more Premier League hat-tricks
The SportsJOE 12 o'clock quiz | Day 111
'ROG was the kingpin... he just wanted to win, win, win' - Barry Murphy
"Some of the guys have put a lot into it" - Felipe Contepomi confident Leinster can start fast
You have two minutes to complete this quiz on Irish hat-trick heroes
What Leinster's strongest XV looks like when everyone is available
The SportsJOE 12 o'clock quiz | Day 109

You may also like
2 days ago
"It's too experimental" - Kenny's team for Slovakia showdown begins to take shape
3 days ago
'I went from playing in front of 74,000 to having families cooking hot-dogs beside the pitch' - Shane Williams
5 days ago
How Connacht could line up after summer of massive change
6 days ago
Peter O'Mahony on the Paul O'Connell conversations that shaped his captaincy
6 days ago
"He just walked out the door without saying goodbye or anything. It was just so Axel. It was so perfect."
1 week ago
"The academy boys have turned into small monsters over the past few weeks" - Peter O'Mahony
Next Page