Ireland XV that should start against Wales and restore pride

Nine changes from the team that started against England at Twickenham.

Such were the opponents and fixture dates, it was always likely that Ireland were going to use the England away game and Wales at home to put out their strongest sides. Ireland rugby supporters would expect that not every selected XV would contain all the big guns as each player in the squad needs minutes.

Joe Schmidt will want to keep to his original plan but, after shipping a 42-point beating by England, he may be tempted to make some alterations.

At his post-match press briefing, following his side's 57-15 thumping, Schmidt mentioned James Ryan, Jack Conan and Keith Earls as senior stars that would come into the mix for Wales in Cardiff, next weekend.

The 'one or two' look to be Robbie Henshaw and Johnny Sexton, who reportedly picked up a leg injury in a recent training session. Will Addison has not featured in either of the first two World Cup warm-ups.

Next Saturday, Ireland will be taking on the world number one side, in Wales, and the reigning Six Nations Grand Slam winners. They will be returning to the ground were they badly tanked in the Six Nations decider in what will be Warren Gatland's final home game after a period of unprecedented success with the country. The atmosphere should be fevered. 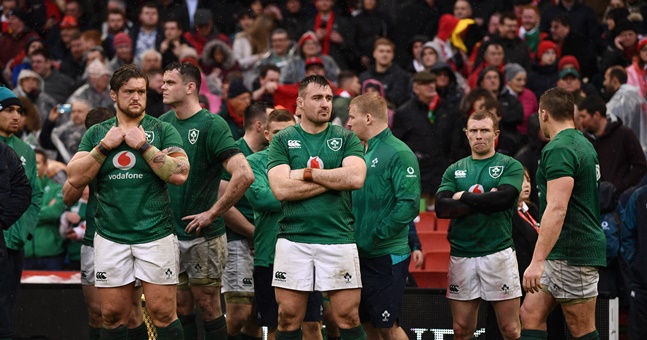 With Cian Healy likely to be rested after his ankle sprain, and Jack McGrath looking shaky off the bench, Dave Kilcoyne should get a start at loose-head. There will be a temptation to give Rory Best another start but it may be time to seriously look at another option - be it Niall Scannell or Rob Herring. Sean Cronin came off the bench on Saturday and the lineout continued to struggle.

END_OF_DOCUMENT_TOKEN_TO_BE_REPLACED

Ireland could do with some ballast, nous and go-forward threat in the second row so next Saturday will hopefully see the return of James Ryan, their best player in the Six Nations. Devin Toner has to come back in at this stage. Ireland look unable to function at the lineout without him and he is useful at clearing beyond the ruck.

Changing up the back row is worth a go, too. Tadhg Beirne has been restricted to cameos but he should be afforded the chance to get in from the start, in Cardiff, and show what he can do. The same applies to Jack Conan.

Kieran Marmion is now seriously pressing Conor Murray for the No.9 jersey but we would all breathe easier if the Munster man could show that he still has some of that 2011-2017 magic in him. Ross Byrne had his chance, if little forward momentum to play with, but Jack Carty deserves the 10 jersey if Sexton remains on the sidelines.

We are going back to the 2018 and (most of 2019) backline of Earls, Jacob Stockdale and Rob Kearney, although don't be surprised to either see Addison or Andrew Conway get a start. In midfield, Robbie Henshaw should start if ready (with Bundee Aki on stand-by) and Chris Farrell in the 13 jersey after an impressive showing against Italy.

Our Ireland XV to face Wales