A lot of thought and planning goes into getting as many players possible right and ready.

The idea is for Ireland's best players to peak at the perfect time, and to prevent them getting "goosed".

Jason Cowman, Ireland's Strength & Conditioning coach, held a media briefing at the Aviva Stadium on Monday morning. The presentation was all about Ireland's Player Management Plan and there was time for a Q&A after.

END_OF_DOCUMENT_TOKEN_TO_BE_REPLACED

Cowman pointed out that the IRFU have around 160 senior pros to be dealing with, and monitoring, over the course of a season and up to 40 of them could be injured at one time. Sometimes more; sometimes less.

Making sure the players get a sufficient break, or two, during the season as they are often drafted back into action by their provinces by week two or three of the Guinness PRO14 season. 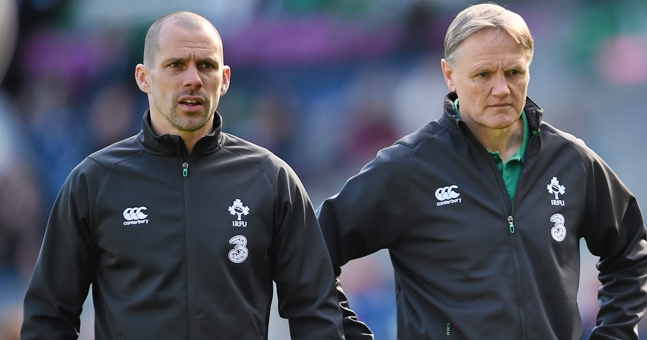 Ireland's Player Management Plan is often lauded, and with good reason, but there are several times a season when tough calls need to be made. That could include a senior Ireland international, who is perfectly fit, being rested for a fortnight during the season. Cowman commented:

"In the provincial programme, there are three two-week periods where the player is off. They don't have a game.

"Those two weeks are big regeneration periods for them. What we normally have during the season - having been at Leinster and seen what they do - they have a week of strength and conditioning and then they have a week off completely. They go on holidays or something.

"They actually don't get same breaks or the same amount of pre-season, so it is basic sums. They get a four-week extended period (of holidays/rest) at the end of the season and then they come in to play in round two (of the PRO14). By right, they should be playing in round four.

"Basic sums tells you they should come in week two or three and they'll all be playing by week four. They get a shorter period of rest and don't get those three two-week breaks during the season. They have two weeks off during the Six Nations but they're goosed. Two Test matches in a row and they're shot by week three (of the competition).

"That is why we dump in a week of regeneration after the November Series and a week after the Six Nations, when their workload has been significant and they've been in high stress situations."

So that might mean you don't get to see the Irish stars in the weeks after international windows but it is perfectly understandable.

"They're still chasing rest," he says and he makes it seem like an exhaustive process.


popular
'I was so stressed the week before the All-Ireland and I ended up having a panic-attack' - O'Shea and O'Sullivan open up
Roy Keane's issue with Argentina star could rival Graeme Souness and Paul Pogba
Roy Keane cracked up Ian Wright and Gary Neville with England team spirit remark
Roy Keane takes moment on TV to pay tribute to his old team in Cork
The nine England World Cup footballers who could have played for Ireland
Lionel Messi makes Gary Neville eat his words after "silk pyjamas" comment
Roy Keane shoots down ITV presenter's 'excuse' for England's draw with USA
You may also like
1 day ago
Former England international admits he wishes he had played for Ireland
6 days ago
Two baffling omissions as four Ireland stars make World Rugby 'Dream Team' of the Year
6 days ago
Josh van der Flier claims World Rugby Player of the Year at Monaco ceremony
6 days ago
"Highlight of my Ireland career" - Behind the scenes as Jack Crowley and Ross Byrne covered for a legend
1 week ago
Bundee Aki reminded us all of his best qualities, on a night Ireland couldn't do without him
1 week ago
Peter O'Mahony delivered some fitting Jack Crowley comments after surprise Test start
Next Page