Ireland's beaten pack and the statistics that sum up Japan's dominance

The first-choice Irish pack will, for the most part, be rested for Thursday's game against Russia. Players in jersey numbers one to eight started both the Scotland and Japan and most were out on their feet long before the final whistle sounded in Shizuoka Stadium on Saturday evening.

Joe Schmidt has been speaking, for a number of months now, about how Ireland would be hamstrung by the six-day turnaround in their first two games. Still, the Kiwi ploughed ahead with selecting the same pack for both games and it back-fired.

Wholesale changes would not have been wise and you can see why Cian Healy and Tadhg Furlong were selected from the start, as they were never likely to play much more than 50 minutes. James Ryan has youth and freshness on his side and Josh van der Flier has not had an abundance of rugby in 2019. CJ Stander is an ironman.

The big calls were Rory Best, Iain Henderson and Peter O'Mahony all being asked to put themselves through the wringer again. The Ulstermen appeared to have emptied the tank against the Scots - both playing very well - while O'Mahony lasted only 27 minutes after suffering head and neck blows. In Schmidt's defence, O'Mahony was supposed to be rested for the game but Jack Conan's injury saw him drafted into action again.

Schmidt said O'Mahony was 'mad keen' to play but that should not have mattered. Rhys Ruddock or Tadhg Beirne should have started.

Those calls, and the manner of Ireland's defeat to the Brave Blossoms, were discussed on the latest episode of Baz & Andrew's House of Rugby. 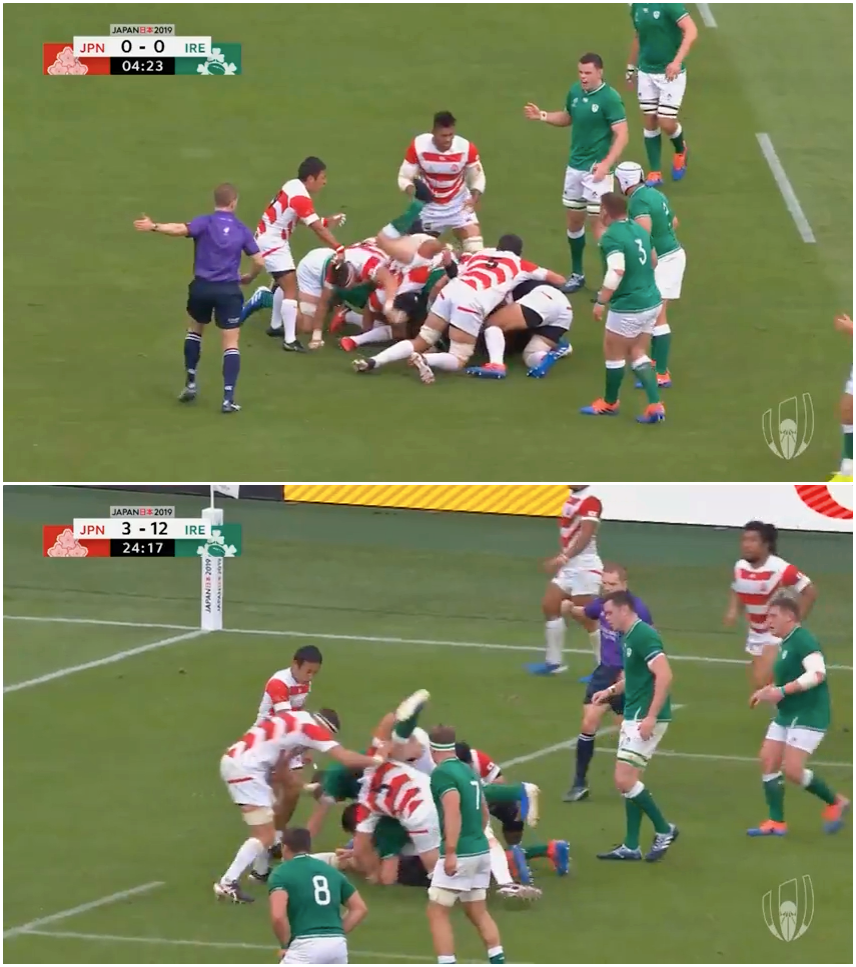 When it came to the breakdown, Japan completely had Ireland's number. They tackled in pairs, one high and one low, and then left those two players there to slow Ireland down as much as possible. They did not commit numbers while Ireland flung two or three men at it.

When the likes of Josh van der Flier and Peter O'Mahony [pictured above on two separate occasions] went in to poach or slow down, the Japanese player either pinned them in or lifted their legs. O'Mahony had his legs lifted twice and, as he did not release, was penalised. The Munster captain did secure one turnover [penalty] after a Chris Farrell choke tackle but he had an off day around the ruck.

In terms of raw numbers, O'Mahony had an off day all round:

He was replaced after 54 minutes for Ruddock. Beirne did not come on until the 65th minute but did hit 13 rucks and made a turnover in his very first action on the field.

Rory Best was quiet, too, and it was not just the costly loss of two lineouts that contributed to it. Best was involved in 22 rucks during his 60 minutes on the pitch but struggled to make an impact in staunch Japan's attacking flow.

Best made 10 tackles and missed one and failed to make a dominant hit. He made only three carries and two of them saw him driven backwards. He almost made a fourth carry, just inside the Japanese 10-metre line, but by failing to hold onto a James Ryan pass, referee Angus Gardner - harshly - adjudged as a knock-on:

Angus Gardner called this forward from Rory Best, just inside the Japanese 22, when Ireland were flying

Very poor call that surprised all the Irish players nearby pic.twitter.com/7zFTSjCitm

And then we get to Iain Henderson.

After a tour-de-force against Scotland, his best game in an Ireland jersey since England were rumbled in Dublin on St Patrick's Day, the Ulster lock was off the pace and struggled badly.

Henderson was involved in 28 rucks and was first man in on 14 occasions. He was effective in attacking rucks but was another that struggled to blast into the breakdown while on defensive duty.

The big concern for Henderson was his ball-carrying. Opta list him as having eight carries but only getting over the gainline twice. On the other six occasions, he was driven back for a loss of metres. He stuck 13 tackles but none were dominant or drove the Japanese back, or forced an error. The shame for Henderson was that he could not back up one great performance with another, and it cost his team.


popular
The SportsJOE 12 o'clock quiz | Day 136
The daily diet of Manchester United midfielder Jesse Lingard
The diet of a modern day rugby player compared with a top jockey
COMPETITION: Answer this survey for a chance to win a fabulous stay at the Trident Hotel in Kinsale
The SportsJOE 12 o'clock quiz | Day 135
Jadon Sancho to earn eye-watering salary at Manchester United
James Ryan's misfortune opens Leinster and Ireland doors for Ryan Baird
You may also like
1 week ago
Ireland set for Six Nations decider in Paris on October 31
2 weeks ago
We challenge any rugby player to top Jack McGrath's lockdown hobby
3 weeks ago
James McClean opens up on sickening, Covid-related hate mail
3 weeks ago
When the President interrupted a Euro 88 pint between Charlton and Dunphy
3 weeks ago
How an uncultured Englishman conquered Ireland's sporting heart
3 weeks ago
The SportsJOE 12 o'clock quiz | Jack Charlton special (Day 112)
Next Page