"Everyone in that dressing room knew there were moments."

There was a juddering sense of foreboding as Ireland's players walked off the pitch, at Eden Park, on July 2. As they headed towards the tunnel and off toward the dressing room, not many were giving Andy Farrell's men a chance.

One more All Blacks notch in the victory column as it went to 13-0, built up over 46 years of home dominance. For most of the 12 Leinster players in the starting Ireland XV, this was their third defeat in four games. Peter O'Mahony and Keith Earls had acquitted themselves well, but Tadhg Beirne [after a three month injury lay-off] was off the pace.

END_OF_DOCUMENT_TOKEN_TO_BE_REPLACED

While the Kiwis would be getting the likes of Will Jordan and David Havili to pick, after their Covid isolations, Ireland only had Mack Hansen coming back. Iain Henderson and James Hume were already heading home. Cian Healy had been named on the bench but was in no fit state and Andrew Porter was asked to play the full 80. Dave Heffernan's playing time on tour looked to be over, after a concussion, and Johnny Sexton had failed the in-game Head Injury Assessment.

If only we had the self-assuredness and sense of calm that Tadhg Beirne and his teammates had, just minutes after that 23-point loss.

END_OF_DOCUMENT_TOKEN_TO_BE_REPLACED

Following Ireland's Test Series-clinching win over the All Blacks, in Wellington, the Munster lock revealed there had been a big post-match debrief in the 'away' dressing room at Eden Park. From it, Ireland would go on to produce two historic Test victories over the three-time World Cup winners. 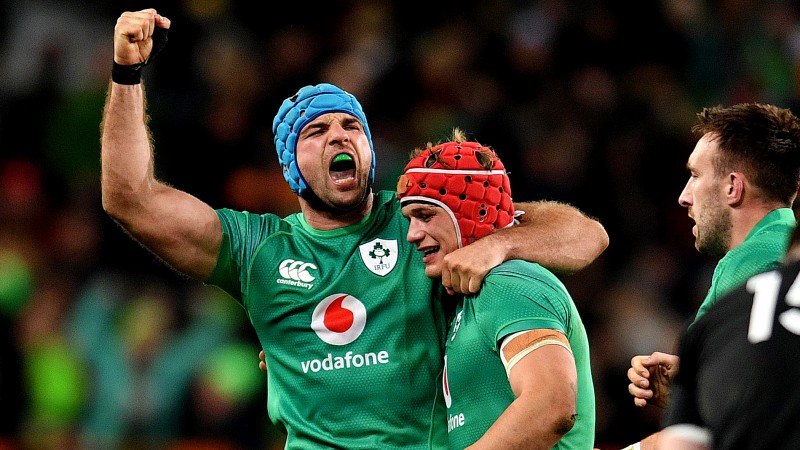 While many Irish supporters would have been concerned, after losing efforts against the Maori All Blacks and New Zealand, about what was to come, one former player believed Andy Farrell's side could at least win one of the two remaining Tests.

"As lopsided as the score is," Ronan O'Gara reflected, "on Monday morning, you start on 0.

"And Ireland will receive some good messages from that [game]. I still think, and many people will think I'm crazy, that Ireland can win a Test."

END_OF_DOCUMENT_TOKEN_TO_BE_REPLACED

Some may have nodded in agreement as ROG said the word 'crazy', but there was a similar sentiment in the Ireland dressing room.

"It was a weird feeling after that game. We lost, yes, and we were disappointed we lost, but everyone in the dressing room knew there were moments - little snippets when we got things right.

"We felt, coming out of the game, that on any other day we could have beaten them. We just had to get our own stuff right."

There was another moment that the Eadestown native had crystal clear in his mind. It was a team meeting called by Andy Farrell the day after the squad had landed in Auckland.

"He said we can make history by becoming the first Ireland team to win away in New Zealand but that we should not be satisfied with just that," Beirne recalled.

"'We want to win the series,’ Andy said. He put the question to us - 'Did we believe?' Not one of us had any doubts."

Some would have doubted whether Ireland could turn over the All Blacks, even off the back of their Triple Crown achievement and with a squad packed with talent. Many more would've jumped off the train after 42-19 at Eden Park.

Beirne and his teammates stayed on-board and it was them that de-railed the All Blacks in the space of two weeks, and two memorable victories.


popular
Barcelona allowed to register four new signings, but Jules Kounde misses out
"He can add something to our attacking line up" - Jamie Clarke signs for Northern Irish soccer club
Angry Frenkie de Jong 'tells Barcelona teammates he could join Man United'
Erling Haaland registers strange statistic on home debut as Mark Travers keeps the City score down
Ranking the best county GAA songs of all-time (32-1)
"It was unfair on the Galway backs” - Tomás Ó Sé admits that Kerry benefitted from unfair rule
Antonio Conte 'banishes' four Tottenham players from first-team
You may also like
2 weeks ago
“My confidence was on the deck" - Aaron Connolly explains why he has made the move to Italy
2 weeks ago
Every Irish transfer in football, this summer, as several big deals get done
3 weeks ago
Six Irish players make damn impressive 'World XV' that would take some beating
3 weeks ago
The frontrunners for Ireland's 33-man squad for the 2023 World Cup
3 weeks ago
All Blacks media manager explains why Ian Foster appearance was cancelled after Ireland defeat
3 weeks ago
Warren Gatland selects nine Irish players in his strongest Lions XV, right now
Next Page