"I decided not to demand that All Blacks head coach Ian Foster front late on Sunday morning. Not him."

It was hard not to feel for All Blacks head coach Ian Foster, on Saturday, after he had to bat away questions on his future in the role, after the Test Series loss to Ireland.

The first query came early on in Foster's post-match press briefing, during which he started off by offering his congratulations to Ireland for their 2-1 series win. 'Fossie' told reporters that immediately after the game was not the time to discuss his coaching future. He was asked, twice more, if he was the man to lead New Zealand ahead, and into the World Cup, until a media manager interjected.

END_OF_DOCUMENT_TOKEN_TO_BE_REPLACED

The next day, the New Zealand Rugby Union released a statement saying how disappointing the series loss had been, and noting that a full review was coming up for Foster and his staff. That meeting now looks set to happen on Thursday, after initially being planned for today.

As a matter of course, the All Blacks manager will do a 'stand-up' [huddle] chat with reporters, either at the team hotel, training base or airport, after a championship or series is completed. Foster was slated to do one on the day after Ireland's 32-22 victory, in Wellington, but reporters showed up and waited around, only to be told it was not happening.

In a passionate LinkedIn post, All Blacks media manager Jo Malcolm presented her reasons for Foster's press appearance being nixed. 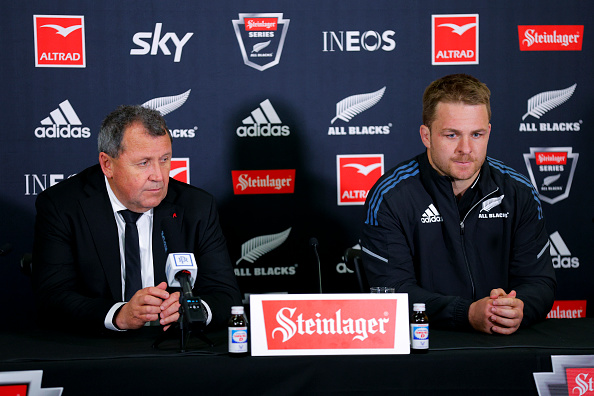 'Think, before you join the media in a massive pile on'

END_OF_DOCUMENT_TOKEN_TO_BE_REPLACED

Jo Malcolm, the AB's media manager, took to the professional networking site and began her post by outlining how, having been a journalist for over a decade and is now teaching future journalists, she always advises her students to 'be a human being first'.

She responded to a "crack" at her by former NZRU media man Mike Jasper, who said Ian Foster should have 'fronted up' after the series loss. She continued:

'For the record, I decided not to demand that All Blacks head coach Ian Foster front [to the media] late on Sunday morning. Not him.

'I felt he needed a day or so to work out what he wanted to say and not just be a punching bag for the media, who let's be clear, wanted blood. Let’s not pretend there was a higher purpose here.

'Let’s also be clear fans deserve to know what’s going on. I’m very clear on that. The timing - well, he’s a human being who I wanted to protect. I now understand why Naomi Osaka refused to do press conferences. It’s brutal when you lose and, yes, tough questions needs to be asked.

'Ian Foster and Sam Cane have been bagged so much in the media, I felt they needed a little space to think. My bad? Hindsight? I’ll take that hit. I am here to look after people as well as do comms.'

END_OF_DOCUMENT_TOKEN_TO_BE_REPLACED

Malcolm also advised fans, pundits and others in the rugby community to 'think before you join the media in a massive pile on'.

For context, the All Blacks have lost four of their past five Test matches [three to Ireland and once to France, last November]. Foster took New Zealand to a World Cup semi-final, but his side were comprehensively beaten by England. He also has the lowest winning record [67% - 16 wins in 24 games] since Eric Watson, from 1979 and 1980.

Back in 2012, when Ireland followed up a third place finish in the Six Nations and a 3-0 series defeat to New Zealand, which included a record 60-0 defeat, Declan Kidney was asked about his future in the Ireland job.

Since the tournament began in 1987, no All Blacks head coach would have been fired so close to a World Cup. Wayne Smith resigned from the role in 2001 after consecutive Bledisloe Cup losses to Australia, with John Mitchell replacing him for the 2003 World Cup run-up, and event.


popular
"He can add something to our attacking line up" - Jamie Clarke signs for Northern Irish soccer club
Antonio Conte 'banishes' four Tottenham players from first-team
Ranking the best county GAA songs of all-time (32-1)
"I’ve never heard someone say something as stupid” - Katie Taylor blasts Jake Paul's rematch comments
"I don’t trust you" - Joey Barton delivers brutal dismissal of Irish defender
"It was unfair on the Galway backs” - Tomás Ó Sé admits that Kerry benefitted from unfair rule
Barcelona allowed to register four new signings, but Jules Kounde misses out
You may also like
2 weeks ago
“My confidence was on the deck" - Aaron Connolly explains why he has made the move to Italy
2 weeks ago
Every Irish transfer in football, this summer, as several big deals get done
3 weeks ago
Six Irish players make damn impressive 'World XV' that would take some beating
3 weeks ago
The frontrunners for Ireland's 33-man squad for the 2023 World Cup
3 weeks ago
Warren Gatland selects nine Irish players in his strongest Lions XV, right now
3 weeks ago
"It’s only 18 months ago that we were being written off altogether" - Johnny Sexton
Next Page