One quality fullback respecting the actions of another.

The word you will hear most about Hugo Keenan is 'consistent', but that is selling the Leinster and Ireland star short.

Keenan has been so solid at fullback for Ireland that we have been allowed to forget that shaky 12 months after Rob Kearney retired from Test rugby and Andy Farrell was experimenting with Jordan Larmour and Jacob Stockdale.

END_OF_DOCUMENT_TOKEN_TO_BE_REPLACED

Keenan played four of his first six Tests on the left and right wings. It was not until the start of the 2021 Six Nations that Keenan was settled as first-choice fullback for Ireland. Neither he nor his country have looked back.

The 25-year-old is composed in the air and gets all his defensive work done with little fuss. He is reliable. He is steady. But he is so much more than that. Ireland's final two outings of the 2022 Six Nations have shown just how vital a player he is to this team.

On the latest House of Rugby [LISTEN from 5:30 below], hosts Sean O'Brien and Alex Goode selected Keenan for their 'Best XV' of the tournament. Goode also spoke of how he baited Stuart Hogg into his crucial mistake against Ireland. 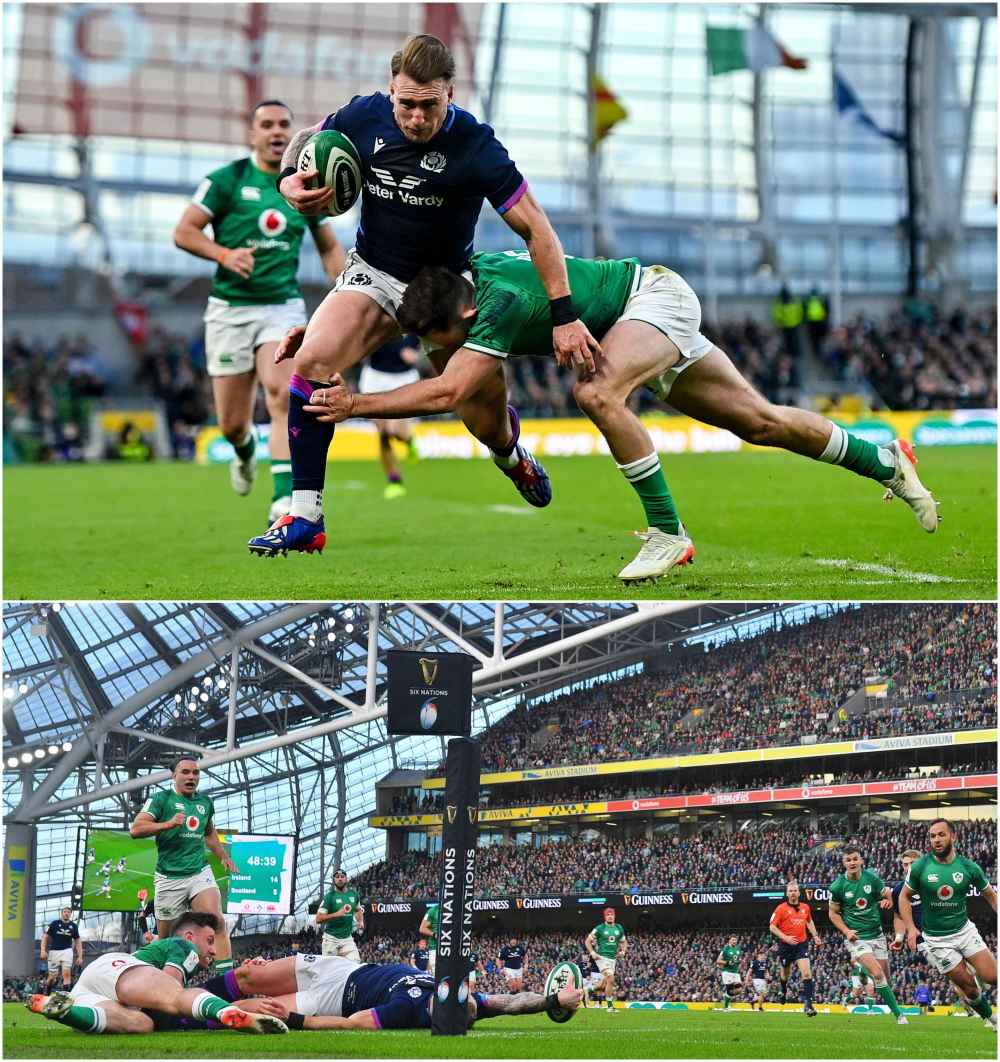 END_OF_DOCUMENT_TOKEN_TO_BE_REPLACED

At 48 minutes in Ireland's recent win over Scotland, Andy Farrell's side were set to pay for being profligate with the many scoring chances they created. They were 14-5 up, but Stuart Hogg had the ball and the Scots had a four-on-two.

With Sam Johnson and Chris Harris both inside him, Hogg should have passed. Keenan was the last Irish defender home and Goode, who has played fullback for Saracens and England spotted some excellent decision-making.

"Hugo Keenan paused for a split-second and coaxed Stuart Hogg to go for the corner. He opened the door for him and slammed it closed."

Looking back, there is a crucial pause from Keenan that must have made Hogg's eyes light up. The Scotland fullback then decided to go it alone, and Keenan made him pay.

Making impacts in attack and defence

A converted Hogg try there would have made it 14-12 with 30 minutes to go. As it was, Hugo Keenan had stepped up with another big play and Ireland went on to win 26-5.

Post-match, Hogg was still telling himself that he would have scored from that position, on most days. "If I get down [and dive] on my belly, I probably score that. On another day, I probably do."

Perhaps he will not take Keenan for granted again.

In the England match, the previous weekend, the Leinster back was one of the best Irish players on show. He showed great attacking instinct and determination to bomb in from 10 metres away and score after a Jamison Gibson-Park quick-tap.

That try saw Ireland go 15-6 ahead, but England - with only 14 men - clawed it back to 15 apiece, heading into the final quarter. Watching that game live, Keenan was one of the Irish players that looked to have stepped up in a late, winning spurt.

Watching it back, a couple of days later, I was blown away by the class and composure of Keenan. He stepped up - whether it was with high takes, passes, support lines, tackles or carries - with five big plays in the closing stages.

Making multiple team of the tournament selections, along with that Irish Triple Crown, were rewards for Keenan at the end of a second superb Six Nations campaign.

Bigger tests await on the summer tour to New Zealand, but this could be the next window that sees Keenan reach even greater heights.


popular
Former England Under-21 captain open to playing for Ireland
The four stone-cold certainties for All-Stars even as early as this
Romelu Lukaku was upset by Thomas Tuchel's 'daddy' joke about Antonio Conte
Kylian Mbappe reportedly wants PSG to sell Neymar
Eamon McGee just couldn't help himself with Armagh-melee tweet
"He's actually smiling putting the ball over the bar. He should nearly be fainting." - Ryall on Limerick's legacy
"The economy was one of the big reasons" - Cadogan's move from an electrician to personal training
You may also like
1 day ago
Gavin Coombes one of four Irish players to push themselves into Test picture
1 day ago
Bundee Aki understandably emotional, as Ireland pay moving tribute to late Sean Wainui
1 day ago
Full Ireland player ratings after Maori All Blacks teach us an early lesson
1 day ago
"We could lose all five games" - Darren Cave with a rare take on Ireland's chances
2 days ago
Mike Lowry and Peter O'Mahony in First Test contention as Ireland shuffle deck
2 days ago
"Significant" knee injury ends Iain Henderson's tour of New Zealand
Next Page