It was far from easy going for the Irish side at Aviva Stadium, but they did enough against an honest but limited Scotland. Our Ireland player ratings have a few home-town heroes.

The victory saw Ireland keep up the pressure on France ahead of their evening clash with France, in Paris. It also secured them a Triple Crown triumph and kept them in the title hunt.

END_OF_DOCUMENT_TOKEN_TO_BE_REPLACED

Ireland looked to be cruising after 30 minutes, thanks to tries from Dan Sheehan and Cian Healy, but the Scots were having some sway at the breakdown. After one such steal, the Scots piled forward and Pierre Schoeman was just about able to ground the ball on the whitewash. 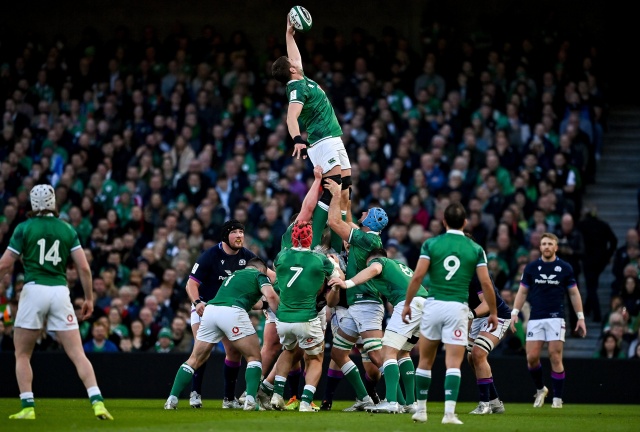 Ireland were looking flat in the opening 10 minutes of the first half, despite a Caelan Doris turnover and more sniping darts from Jamison Gibson-Park. Iain Henderson was stripped, just metres from the Scottish line and the visitors almost made them pay, up the other end of the pitch, minutes later.

END_OF_DOCUMENT_TOKEN_TO_BE_REPLACED

A break down the right wing saw Scotland with a three-on-one, but captain Stuart Hogg went for glory - instead of passing - and Hugo Keenan saved the day with a super tackle.

Ireland continued to turn down kickable penalties in the second half, and looked like they could regret it until the hour mark. That saw them, off the back of a strong scrum, pound at the Scottish line and Gibson-Park find a nice inside pass to tee up Josh van der Flier for a converted try that made it 21-5. Sub Conor Murray got over for a late try that delivered the bonus point for the Triple Crown winners.

END_OF_DOCUMENT_TOKEN_TO_BE_REPLACED

As always, solid under high balls. Made up huge ground to deny Stuart Hogg what should have been a certain try.

Was more needed in a defensive capacity in the first half. Nearly had himself a try, on 43 minutes, after Gibson-Park's lovely grubber. Then made a peachy offload to keep the play going. Whole-hearted in the kick-chase and made a couple of scrags.

Made a couple of nice steps for extra metres on carries, but most ground was made inside his own half. Decent without doing huge damage.

Highlight of the first half was a thumping tackle in the Scottish end-goal area. Solid in defence but did not worry the Scots much with ball-in-hand.

Picked a bouncing Conan pass off his bootlaces to keep an attack alive. Tossed one at the throat of Beirne that ended up in a turnover. Livelier in the second half but got swallowed up and turned over on one carry after a Hogg punt. Made one great offload to Treadwell, but he could not hold on. Carried for over 100 metres again.

Got the crowd going with an early 50/22 gem to the corner. Tried all he could to inject a spark into an attack that was spluttering at times. As captain, he made the big calls to go for attacking lineouts. They failed, in most part, initially but it could be argued that those tactics ground down the Scots.

Made a 40-metre sniping run but kicked a tad too early to allow Hogg to clear. Made another snipe in the second half and his grubber kick across to Hansen was perfection. Great inside pass for van der Flier try. One of his best in green, so far, without being perfect. 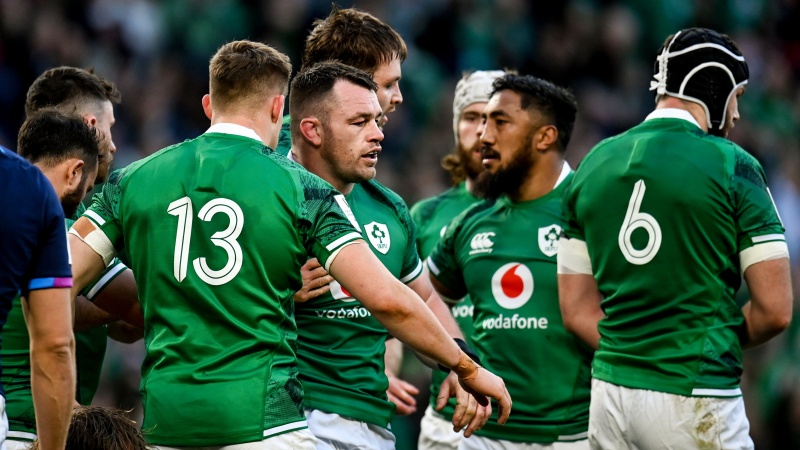 Made a nice shunt to destabilise the Scottish maul before Sheehan's try. Helped himself to one of his own, soon after. Much more routine day in the scrum.

Made one charging carry that carted a couple of Scots backwards. Nice power for his try, too. Was the best player on show, for either side, in the opening 40. Solid at scrum and lineout too. 31 metres gained off a lung-busting 15 carries, with 11 tackles landed, too.

Stepped up with a great penalty win just outside the Scottish 22 after that Schoeman try. Made a couple of thumping carries and was part of a solid scrum. Did miss a couple of tackles.

Had an early knock-on but pass to him was a snorter. Second turnover was aslightly more on him as Rory Darge poached in after he carried into the 22. Pinged once for lineout interference.

Stuck out a paw, early on, to snatch a loose pass and keep an attack alive. Big lineout presence in the opening half and put in a few rib-rattlers. Watson ripped the ball away from him, close to the Scottish line.

Some strong tackles in the first half stopped the Scots in their tracks. Nice turnover won for his side at the start of the second 40. Made a bad knock-on, not far from the Scottish tryline.

Sank 10 tackles in a busy first half but, like others, did not have it all his own way at the breakdown. Was on the spot and charging with intent for his try. Stuck a team-leading 18 tackles but was double figures for carries, too. Having a great season.

Came up with a couple of nice carries off the back of a rock solid scrum. Showed great hands to hold onto a pass way over his head from Hansen. Carried well but missed a couple of tackles. Appeared to pick up a knock, mid-way through the first half.

Got all the plaudits for a scrum penalty, soon after coming on.

Came on to provide another lineout option.

Made a strong carry, sucking in bodies, before van der Flier's try.

Added some heft. One knock-on, out wide.

Made some crunching hits.

Power and foot-work for his late try.

Scrum was creaking in the latter stages.


popular
Castleknock's Warnock the hero as Maynooth win first ever Ryan Cup final
Cristiano Ronaldo 'agrees £173m-a-year deal' with Saudi club
"Nowadays, even if I don't hit a ball, I don't care as long as we win" - Gleeson learning from the past
Argentina reach World Cup last-16 with convincing win over Poland
Damien Duff makes 'brutally honest' England World Cup prediction after Wales win
World Cup 2022 Day 11: All the major action and talking points
Thibaut Courtois warns teammates after leaks emerge from Belgium camp
You may also like
5 days ago
Former England international admits he wishes he had played for Ireland
1 week ago
Two baffling omissions as four Ireland stars make World Rugby 'Dream Team' of the Year
1 week ago
Josh van der Flier claims World Rugby Player of the Year at Monaco ceremony
1 week ago
"Highlight of my Ireland career" - Behind the scenes as Jack Crowley and Ross Byrne covered for a legend
1 week ago
Bundee Aki reminded us all of his best qualities, on a night Ireland couldn't do without him
1 week ago
Peter O'Mahony delivered some fitting Jack Crowley comments after surprise Test start
Next Page