"You've seen what he can do on the pitch."

2022/23 pre-seasons are well underway for all four Irish provinces and new Munster head coach Graham Rowntree is in his element.

After over a decade of being an assistant coach, the former England star now has his hand on the tiller and is pushing on with his own ideas, with a newly-assembled coaching staff. Former Munster players Mike Prendergast and Denis Leamy have returned as respective attack and defence coaches, with Andi Kyriacou overseeing the forwards.

END_OF_DOCUMENT_TOKEN_TO_BE_REPLACED

Rowntree took time out from his season preparations to have his first in-house interview at Munster since getting his promotion to the top job.

"Pride, more than anything", is how Rowntree describes his overall feeling at landing the head coach gig. "It's a feeling of pride, to be able to lead a great group of people."

Rowntree says new centre signing Malakai Fekitoa "excites me", as does the "sought-after" French back, Antoine Frisch and Irish-qualified hooker Chris Moore. The 51-year-old perked up even more as he discussed the province's recent academy graduates to the senior squad:

"Well, we've seen what they can do on the field, with Scott Buckley and Kendo [Alex Kendellen] in particular. Paddy Kelly will have his time. He's had his disappointments with a few injuries, of late. But they are guys that deserve to make that move and, day-in and day-out, they're a handful in training.

"You see the way Kendo has forced his way into the team, there. And Scott Buckley has had his chance, and taken it when he's got those opportunities. So, delighted with how they've progressed. If you're good enough, you're old enough.

"They've deserved their starts - Kendo in particular, with that diligence he is showing each day. He's asking how he can get better, putting it in, in training, and we will categorically reward those young guys." 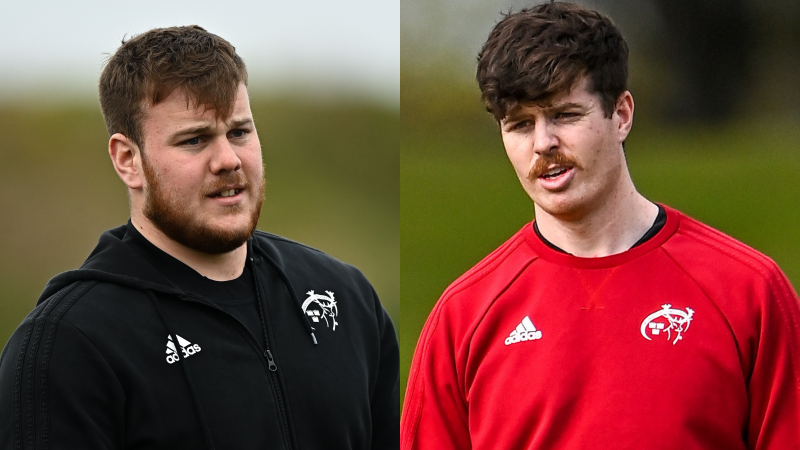 END_OF_DOCUMENT_TOKEN_TO_BE_REPLACED

While scrumhalf Paddy Patterson and lock Eoin O'Connor have also been promoted from the academy, Munster have lost a number of experienced players, such as John Ryan, Matt Gallagher, Jason Jenkins, Chris Cloete and Damian De Allende.

Academy players Evan O’Connell, Jack Oliver and Ruadhan Quinn have all been in training with the senior squad, while recent injury lay-offs Diarmuid Barron (elbow), Thomas Ahern (thigh) and Chris Farrell (hip) have all returned to team training, as well as the "reintegrated" RG Snyman.

END_OF_DOCUMENT_TOKEN_TO_BE_REPLACED

Pre-season prep will really kick into high gear in August when the squad's Ireland internationals join up with the rest of their teammates. That group includes Peter O'Mahony, who will not have to worry about getting carried away with his key role in Ireland's Test Series win over the All Blacks.

Simon Zebo is keeping Munster fans up to date with some behind-the-scenes glimpses of the province's preparations for 2022/23. On Monday, he was sharing footage of Malakai Fekitoa shifting tin in the Munster gym. On Tuesday, both he and Jean Kleyn were personally handling mail sent to the High Performance Centre, addressed to O'Mahony:

Unanimously voted best player of the summer Test match series', between the leading nations, the Munster lads are letting nothing go to O'Mahony's head.

Underestimate Keith Earls at your peril...


popular
Ranking the best county GAA songs of all-time (32-1)
"It was unfair on the Galway backs” - Tomás Ó Sé admits that Kerry benefitted from unfair rule
Adrien Rabiot's mother has put Man Utd move at risk of collapse
"I’ve never heard someone say something as stupid” - Katie Taylor blasts Jake Paul's rematch comments
Antonio Conte 'banishes' four Tottenham players from first-team
"I don’t trust you" - Joey Barton delivers brutal dismissal of Irish defender
"I remember just hugging this Irish guy" - How one Kiwi rugby star reacted to Ireland's historic series win
You may also like
3 days ago
"Everything’s done for you" - Eddie Jones on how private schools influence English rugby
5 days ago
Faf de Klerk knocked out after horror collision with knee of All Blacks winger Caleb Clarke
5 days ago
"We'll support him in any way we can" - Wallabies captain Michael Hooper backed for brave mental health decision
1 week ago
At a time when rugby needs genuine characters, Naitoa Ah Kuoi could not have timed it better
1 week ago
Eight Ireland players make final cut in 'World Class' 33-man squad selection
2 weeks ago
"There's no magic wand. A lot of it starts and finishes with hard work" - Ronan O'Gara
Next Page