"On this Valentine’s Day I hope all the lovers of sport and rugby enjoyed that."

France head coach Fabien Galthie was in his pomp after leading his side to their first Six Nations win in Dublin for a decade.

Les Bleus defeated Ireland 15-13 to end their host's title hopes while keeping their own Grand Slam campaign on track.

END_OF_DOCUMENT_TOKEN_TO_BE_REPLACED

The reaction of the French players at the full-time whistle spoke volumes about what victory meant to them. Several players sank to the pitch in sheer, exhausted elation and others could not hold back the tears.

There were hearty embraces and team huddles on more than one occasion. As Galthie and France captain Charles Ollivon conducted their post-match TV interviews, the entire squad stayed out on the pitch to soak in the victory.

20 minutes after the game had ended, they were still out there, joking, hugging and having rousing conversations. This team arrived to Dublin convinced they can sweep all comers and that belief has only been strengthened.

"It is a hugely proud moment," said Ollivon, who scored a first half try, after the game.

"Happiness is the simplest way of describing the feeling. It was a match of men with no quarter given. That sums up the game. It was a really ferocious battle and we are very happy for the squad and the supporters. It was our state of mind that won us this game. It was really physical. You felt every contact was a crunching one. There was not a single moment when we could relax. It was war from the first minute to the 80th."

"It was really tough out there," Ollivon added. "It has been 10 years since won here and that says everything about the quality of our opponent.

"This was the match we targeted. Both individually and collectively we needed to raise the bar today. We required a huge performance and this does wonders for both the head and the body. We are going to savour this take the most out of it and it will give us momentum for what is to come." 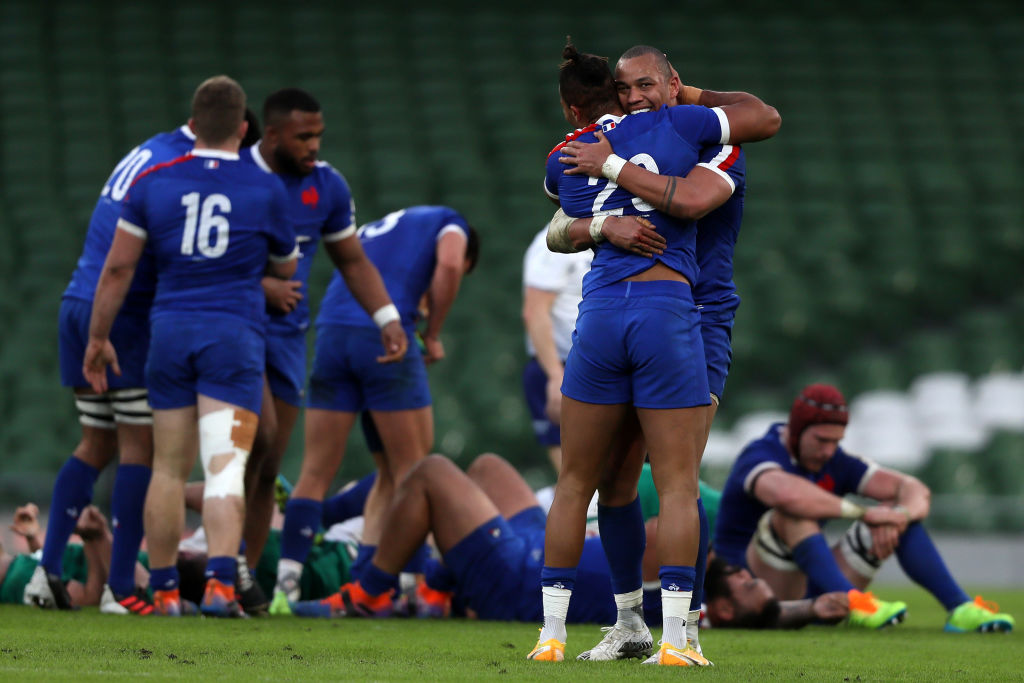 Galthie was ebullient after his side went top of the Six Nations standings again.

"To all the children who can’t go the stadiums, we tried to give them joy and happiness, " he said. "The match was difficult, we expected that. At one moment we felt we could have made it easier but they’re a team who gave up nothing until the end."

"It is is a long time since we won here in Dublin," Galthie added. "I was full of emotion as a win always brings that, and even more so when there are no spectators in the stadium. So it is important to transmit how much a win like this means to us and the country in tough times."


popular
Galway fans' frosty reception for Davy Fitz doesn't make any sense
The most Stone Age tackle you've ever seen gets South African lock straight red card
"Johnno went, 'We’re not moving! You're trying to mess us about!'" - Ben Kay recalls red carpet controversy
Ryan Manning hacked to the ground by Henri Lansbury in ruthless assault
Ian Poulter shares Ryder Cup advice to Shane Lowry and Team Europe rookies
Final question of Ryder Cup press conference has Team USA in all sorts of trouble
Pep Guardiola's defence of his tone deaf comments is a bizarre hill to die on
You may also like
2 days ago
Katie McCabe believes that equal pay deal with FAI "doesn’t add pressure"
4 days ago
Clinton Morrison shares advice Roy Keane gave him on morning before Saipan showdown
1 week ago
Ireland's best XI under Stephen Kenny starting to take shape
1 week ago
Serbian media react to 'True Football Tragedy' and hail "amazing" Gavin Bazunu
1 week ago
"I was already taking my jersey off!" - Andrew Omobamidele's post-match interview was so pure
1 week ago
Gavin Bazunu, Andrew Omobamidele and a glimpse of better days ahead
Next Page