"The Marcus situation is no different from any other team in the world."

Owen Farrell (ankle) and Jonny May (knee) are both due for dates with the surgeon's blade, while Jonny Hill is "touch and go" to face Scotland. That is the bleak injury update from England boss Eddie Jones.

Given how Jones has lost his captain, a key winger and may lose an experienced lock, his form at the launch was upbeat at today's Six Nations launch.

END_OF_DOCUMENT_TOKEN_TO_BE_REPLACED

When your squad still contains the likes of Marcus Smith, Maro Itoje, Tom Curry, Freddie Steward, Ellis Genge, Henry Slade, Sam Simmonds and Alex Dombrandt [to name just eight], one can afford to see the glass as half full.

One plan out the window for the Six Nations, now that Farrell has been ruled out for the entire championship, had been Jones playing his captain at inside centre, one out from the young man in the 10 jersey - Marcus Smith. The England coach is already contemplating a new-look midfield. 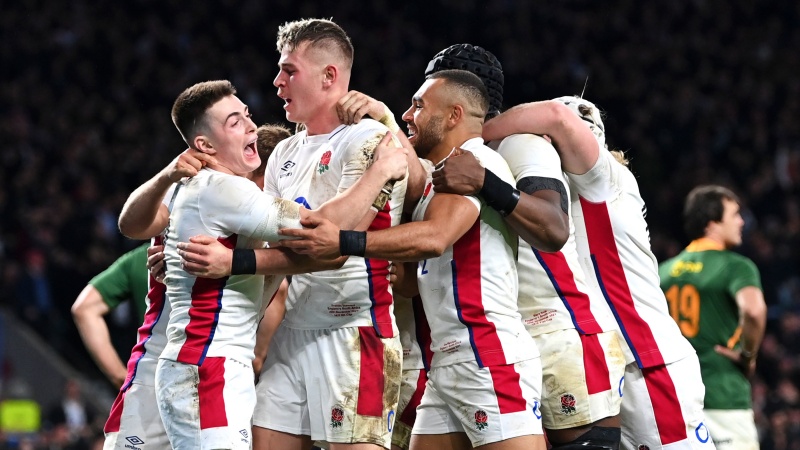 Henry Slade may shift inside

END_OF_DOCUMENT_TOKEN_TO_BE_REPLACED

Manu Tuilagi is also out injured, so Elliot Daly has been called up as centre cover. The Saracens star has plenty of Test experience but most of it at fullback or on the wing. Saying that, his last two Test matches were at centre, but for the British & Irish Lions.

On the Farrell injury, Eddie Jones said, "It’s a massive blow for him, personally, and for the team it’s a blow.

"It’s also an opportunity for other guys to step up into leadership roles, opportunities for other players to play for that No 12 jersey. We see it more as an opportunity. In today’s rugby, having your best team on the field is a rare occurrence so we’re pretty used to it."

England met up on Tuesday so they do have well over a week to work on combinations for their midfield. Jones, today, was openly mulling the possibility of shifting Exeter's Henry Slade in a spot from his usual outside centre.

"It's important for any 10 in the world whether it's Marcus Smith or Finn Russell or Romain Ntamack for France that the 12 is a good communicator and takes some of the pressure away from the 10 in terms of giving good information and assisting in the defence role."

END_OF_DOCUMENT_TOKEN_TO_BE_REPLACED

England won the Six Nations, after a nine-month Covid delay, in 2020 but faltered badly when defending that crown, last year. They lost to Scotland, Wales and Ireland to finish fifth.

Wales are defending champions, England have a wealth of talent, Scotland had their record Lions representation, last summer, and Ireland are on an eight-game winning streak. Still, Jones feels France are the overwhelming favourites to win the Six Nations, and he was only too happy to go on the record about that.

"Everyone is expecting France to win, aren't they?

"You do a tally of all the journalists today and France would be right up there at the top."

France head coach Fabien Galthie could only smile as he heard of the comments from Eddie Jones.

"I am very happy with this compliment, we’re very happy and proud to be labelled as favourites," Galthie said. We are very happy to hear all those positive comments.


popular
Cutting through the contradictions from one of the worst television segments of the year
Roy Keane shows great comic timing after Jack Grealish party invite
France the sore losers as Ireland Men reach first ever Sevens World Series final
Kilkenny corner back does what every defender is supposed to do to win All-Ireland under-20
"I don't want to stick the knife in" - Are Leinster in Munster's heads?
Noel Gallagher left 'covered in blood' after headbutt from Ruben Dias’ dad
Ralf Rangnick nicknamed 'specs' and subject to 'bully behaviour' at Man Utd
You may also like
2 days ago
United Rugby Championship quarter finals confirmed as Leinster beat Munster
2 days ago
Alex Kendellen takes exception to Harry Byrne reaction to lusty tackle
2 days ago
Two years after Leinster heartbreak, Cian Prendergast is Ireland's best young player
4 days ago
Josh van der Flier and Sam Monaghan win big at Irish rugby awards
6 days ago
James Lowe makes 'European Player' shortlist, at expense of Leinster teammate
6 days ago
Sean O'Brien could get to play England, at Twickenham, in his final game
Next Page