Makes you love him even more...

On December 9, Dylan Hartley went all-in with a straight arm tackle on Sean O'Brien that left the Leinster flanker in a daze. If you have not seen it already, here it is in all its inglorious glory: 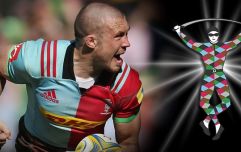 END_OF_DOCUMENT_TOKEN_TO_BE_REPLACED

Hartley copped an eight-week ban that was reduced to five weeks and then upped to six for his previous indiscretions on the rugby field [seven suspensions totalling 56 weeks].

At Wednesday's Six Nation launch in London, England coach Eddie Jones and Hartley, his captain, addressed the shocking Champions Cup incident. Hartley confessed he was working on his 'tackle technique' while Jones joked about his captain's 60+ weeks of suspensions.

O'Brien's name was not mentioned once. There will be no apology. O'Brien probably could not give a stuff.

Hartley did admit, however, that he feared his England captaincy was in doubt after he was sent off for the reckless hit. He told the BBC what was going through his mind in the seconds before he levelled O'Brien. He said:

"It obviously went horribly wrong. That walk off the field is never a quick moment. It always seems to drag on for a while.

"Positive, dominant, hard tackle. That's what I was thinking. Obviously the outcome was different to what I intended."

Hartley added that he had worked hard with Northampton Saints defence coach Paul Gustard on improving his tackling. "It's an ongoing thing," he added.

One hopes he gets it locked in before he comes to play Ireland on March 18.


popular
Mario Balotelli, Luis Suarez, Fernando Torres and why Rio Ferdinand "hated them"
"I remember just hugging this Irish guy" - How one Kiwi rugby star reacted to Ireland's historic series win
"I don’t trust you" - Joey Barton delivers brutal dismissal of Irish defender
Gatecrashed interviews and chip-shop previews - Wexford GAA's online coverage sets the standard
"I'll ask for everyone that comes to the game to wear purple and roots for us" - Pat Fitzgerald
Former manager Paudie Murray doesn't spare Cork after camogie final loss
Javier Hernandez offers to play for Manchester United for free
You may also like
5 years ago
No arguing about Ireland's Player of the Six Nations but Tadhg Furlong pushed him close
5 years ago
CJ Stander broke a Six Nations record and it tells you everything you need to know about the man
5 years ago
PRECISION PLAY: The moment that turned the match against England in Ireland's favour
5 years ago
WATCH: Two moments from Saturday night should clinch Garry Ringrose a Lions jersey
5 years ago
Kieran Marmion could hear the English players calling out the hits on Johnny Sexton
5 years ago
Two Munster players are the sole Irish representation for the Six Nations player of the tournament
Next Page