'Everything that can go wrong, will go wrong' should surely be written on the walls somewhere around Ulster's Kingspan Stadium.

The northern province have endured a hellish season that has seen them lose two coaches in Les Kiss and Jono Gibbes, two players in Paddy Jackson and Stuart Olding and two Lions this week in the form of Iain Henderson and Rory Best, and still, they'll be playing in the Champions Cup next season after a hard fought 35-17 win over the Ospreys in Belfast.

Henderson and Best have been the clear standouts this season in a heavily maligned Ulster forward pack, but as if the losses of the aforementioned weren't bad enough, Ulster lost Ross Kane to injury in the warm up.

END_OF_DOCUMENT_TOKEN_TO_BE_REPLACED

They then lost Charles Piutau, the PRO12's player of the year last year, just minutes after he had stopped kicking with Jared Payne in the warm-up.

Ulster fans were robbed of one more chance to see the All Black light up a ground he has thrilled so many times over the last two years but he didn't disappoint in the warm-up as he caught the ball with his hands behind his back before disposing of another kick with a 15 metre flick of the wrist while looking in the opposite direction. Talent like that will be very hard to find, much less bring to Belfast.

The best skill of the day was before the match, which was of little help to Ulster, but they didn't need it when Craig Gilroy raced clear down the right wing to pounce on a John Cooney grubber kick.

Jacob Stockdale stole headlines earlier this season when he set a Six Nations record for tries scored but Gilroy has been very productive in the games he's played with 11 tries in 13 games this season. 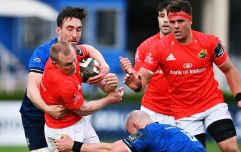 END_OF_DOCUMENT_TOKEN_TO_BE_REPLACED

His pace on both of Ulster's scores ultimately set up a comfortable lead for the hosts but the ball was put on a plate for him on both occasions; first through a smart Luke Marshall grubber off a wrap around and then through John Cooney after an excellent intercept.

Cooney was one of Ulster's best on the day and you figure he'll garner serious consideration for Ireland's tour of Australia next month.

His poise, kicking and reactions were pivotal for Ulster as he finishes the best season of his professional career on a very strong note.

The win was a testament to his work around the ruck, and everywhere else for that matter, and to his teammates resolve. After losing Best, Henderson, Piutau, Kane, Louis Ludik, Luke Marshall and Callum Black either before or during the game, Ulster showed genuine grit and determination to topple a side that looked like a team that should have had the better of them but played like a side that folded when they really should have taken advantage of Ulster's growing casualty list.

Ulster might have been able to avoid this game if their wider squad players had played with this type of ferocity earlier in the season but they stumbled into a play-off and came out the other side with the confidence that they have some depth and some players with some genuine potential that they can work with heading into next season.

When will Dan McFarland arrive? Will they add a fly-half next year? Can they replace Charles Piutau? Will Marcell Coetzee be fit?

They're big questions with not an awful lot of concrete answers but Ulster do have some players that they can work with.

Iain Henderson and Rory Best have committed their futures to the club. They have a long term option at scrum-half in Cooney, one of the best prospects in world rugby in Stockdale, Jordi Murphy and Marty Moore on their way and a string of impressive young players in Nick Timoney, Tom O'Toole, Matt Dalton, Greg Jones, Adam McBurney, Angus Curtis and Marcus Rea.

Ulster have spent most of this season fighting fires, and while they say goodbye to club legends like Tommy Bowe and Andrew Trimble, there's enough reasons for optimism even though uncertainty follows the club like a shadow at seemingly every turn.

Ulster will be playing in the Champions Cup next season, that much is certain.

What they do when they get there remains very much in the unknown but they're there, and for today at least, that's all that matters.


popular
Roy Keane flew home from Qatar World Cup as 'fellow pundits were getting on his nerves'
World Cup 2022 Day 20: All the major action and talking points
Talksport presenter puts Martin O'Neill to the pin of his collar over Declan Rice and Jack Grealish
Roy Keane reveals what he wrote about England during Senegal game
Rory McIlroy explains 'falling out' with Shane Lowry that lasted a few years
World Cup Power Rankings: The top 10 players at the tournament ahead of the quarter-finals
Eniola Aluko responds to criticism after on-air mistake on ITV
You may also like
1 year ago
"It's hard to keep asking, and it's no surprise that they fell a bit flat"
1 year ago
Leinster break Munster hearts, all over again
1 year ago
Leinster reach PRO14 Final but Ulster have every right to feel aggrieved
1 year ago
Mike Haley magic and Bundee's blunder sees Munster reach PRO14 Final
1 year ago
Munster snatch defeat from the jaws of victory
1 year ago
Munster secure victory after thrilling Connacht comeback in Galway
Next Page