"Joe just screamed at me and told me I needed to switch on. I was like, 'Thanks Tadhg!'"

"He'd be the type of person that would throw you down the well, as well."

As early impressions go, Dan Leavy would have been hopeful Joe Schmidt was understanding. He was even more thankful when he got a chance to show he really had been paying attention in those team meetings.

For a while there, the likes of James Ryan, Jordan Larmour, Dan Leavy and Andrew Porter were walking around, in their early 20s, as Grand Slam champions and had yet to taste defeat in an Irish jersey.

Ryan and Porter have since been brought to earth but Leavy's record currently stands at Played 11, Won 11. From his debut against Canada in 2016 to his last Test outing against Argentina, Leavy has left the field victorious each time. Scalps include the likes of Wales, Australia, France and England (twice).

The wins, and outstanding performances, gave Leavy an extra pep in his step but, he admits himself, he was never short on confidence.

"I've been a pretty confident player all my life," he says. "I find it is really easy for people to take it the wrong way and think I'm arrogant - I've heard people say that about me before - but I don't think it is a bad thing to be confident in your ability."

On Baz & Andrew's House of Rugby (from 11:00 below), Leavy told a great story about an early run-in he had with Ireland head coach Joe Schmidt and how it kept him on his toes thereafter. 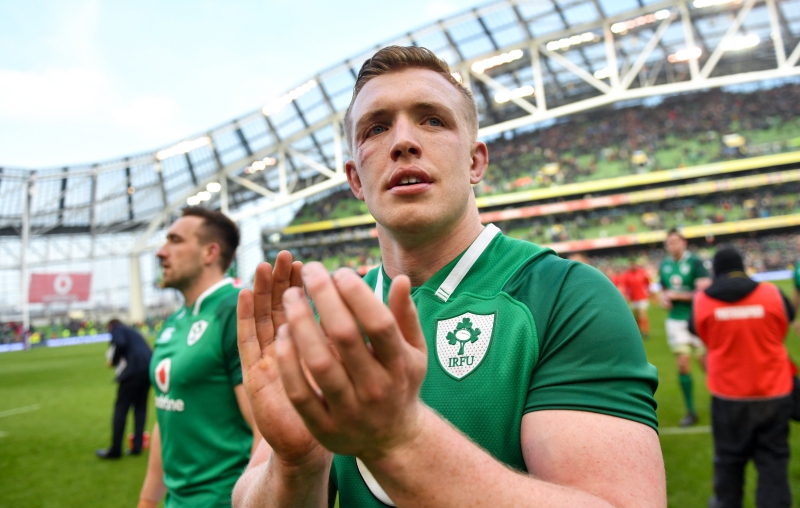 Leavy was first drafted into the Ireland squad in the autumn of 2016. Andrew Trimble recalled a misunderstanding, before the 2017 Six Nations game against France, that had the young Leinster flanker on the back foot.

"I was 24th man. It is a bit of a weird head-space to be in. You want to be clued in... you need to know all your detail, inside out, and be ready to play, but, at the same time, there is no point in getting unbelievably fired up for a game that there's a pretty high possibility of you not being involved in at all.

"I was early down to the team room and got strapped - first in and waiting for everyone to come - and I had my earphones in. I was literally sitting in the corner. Everyone started to come in but it was still about five minutes early.

"I was watching a video of [NFL star] Odell Beckham dressing up as a taxi driver and asking people what they thought of Odell Beckham. I think it was Tadhg Furlong that sat down beside me, and he'd be the type of person that would throw you down the well, as well.

"He sat down beside me and didn't say a word when the meeting started. Had the earphones in, still listening to the video. And then Joe just screamed at me and told me I needed to switch on. I was like, 'Thanks Tadhg!'"

Trimble joked that a Schmidt roasting is very reminiscent of a teacher scolding a pupil. "Everyone giggles, but it's very much a feared up giggle," he said. "Anyone could make that mistake and be on the receiving end."

Fast forward a year and Leavy was starting openside as Ireland followed up that last-gasp win over France with victories over Italy, Wales, Scotland and then England to claim only their third ever Grand Slam.

Leinster and Ireland missed him dearly, at times, last season and will have to do without him for much of 2019/20. Severe knee ligament damage has already ruled him out of the World Cup, later this year, and he may not return until next spring.

Such is his talented, and competitive nature, that Leavy should come back to make positive impacts for province and country.