Three-time Rugby World Player of the Year Dan Carter poked fun at his former Racing coach Ronan O'Gara after the Ireland international wished him a happy 36th birthday on Monday.

Carter shared four years with O'Gara at Racing before recommending the former Ireland international to the Canterbury Crusaders where O'Gara currnetly serves as the Super Rugby champion's backs coach.

The former Munster fly-half wished Carter a happy birthday and was quick to point out that only four years separated the two on his Twitter account.

Just the 4 years between us!!
Happy Birthday to the man who it went right for!! I look forward to the list of restaurants to visit in Paris when I return !!
Honor's list for here is class..

My message to @DanCarter for his birthday.. wait for his reply !!

Carter was seemingly quick to remind him that there was also more than 500 points separating them on the list of international rugby's all-time leading scorers. 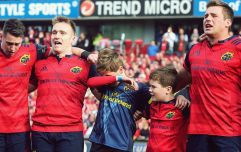 "I remember looking at the players, in the warm-up, and Keats was just bawling crying"

END_OF_DOCUMENT_TOKEN_TO_BE_REPLACED

Carter is the all-time leading points scorer in international rugby with 1598 points in 112 caps while O'Gara sits fourth on the list behind Jonny Wilkinson and Neil Jenkins with 1083 points in 130 caps.

O'Gara has got off to a great start with the Crusaders, who have scored 90 points through their first two Super Rugby games, and said that he has started to enjoy coaching rugby maybe even more than playing rugby.

"I enjoy playing but that's a long time ago now and I'm fascinated with the whole coaching side," he told the press at a Crusaders open training event earlier this year.

"I never thought you'd get the same buzz - or even, potentially, a better buzz - out of coaching when you can see your ideas rubbing off on the 15 players on the pitch."


popular
SportsJOE 2000s Football Quiz | Round 20
The SportsJOE 12 o'clock quiz | Day 292
Daniel Cormier defends immediate reaction to shock Conor McGregor loss
Conor McGregor wants immediate Dustin Poirier rematch, for UFC title
"It’s an easier life in goal, you’re not waiting for some fella to give you a box in the jaw"
Michael Bisping tears into Dillon Danis for 'trying to be Conor McGregor so hard'
McGregor admits shout from Dustin Poirier's corner got inside his head

You may also like
6 months ago
'ROG was the kingpin... he just wanted to win, win, win' - Barry Murphy
6 months ago
'I went from playing in front of 74,000 to having families cooking hot-dogs beside the pitch' - Shane Williams
9 months ago
"It’s kind of frightening how quickly that can have a big impact on someone’s life"
10 months ago
"Rugby isn't played on a laptop" - Ronan O'Gara on his coaching journey
11 months ago
ROG hits the nail on the head assessing Ireland's performance
11 months ago
Can we please, please get the ball to these lads?
Next Page