Munster and Ireland scrum-half Conor Murray has revealed that he was hurt by unsubstantiated rumours that he had failed a drugs test during his recovery from a neck injury.

Murray sat out for five months last year with a neck injury he suffered on Ireland's summer tour of Australia and made his return for Munster in November amid a raft of speculation about his condition.

Murray, Munster and Munster head coach Johan van Graan all refused to comment on his absence leading to rumours that he had failed a drugs test and the two-time British & Irish Lion told Nick Rabbitts of the Limerick Leader that the speculation hurt him and his family.

“The toughest part of this was the outside rumours that my friends and family would hear. Crazy stuff that I’d failed all sorts of drugs tests and they were just keeping it under wraps and letting me serve my ban. That kind of hurt a little bit,” he told the Leader.

“They were guessing what was wrong, and thinks I’m going to have to retire. It’s not nice hearing it for yourself, but them your family don’t really know either. They are seeing second hand information. It’s quite tough." 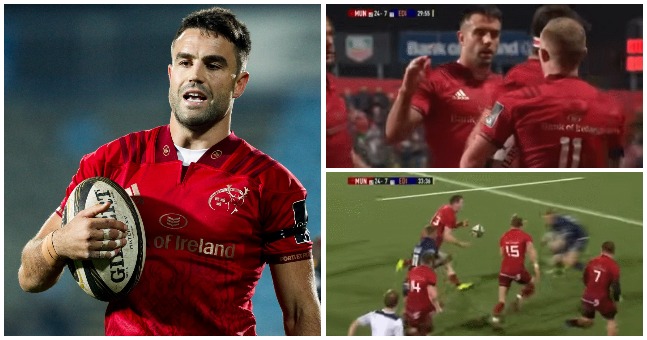 Munster welcomed back both Conor Murray and Chris Farrell for their 44-14 demolition of Edinburgh...

There was speculation that the 29-year-old could join former teammate and friend Simon Zebo in France but Murray said that the decision regarding his future was relatively simply.

“It was a pretty easy decision really,” Murray told the Munster website in a video interview.

“It didn’t take long for me to decide. It’s the place I grew up, watching Munster play and wanting to play for Munster. Luckily I’ve managed to do that a few times and now I get to look forward to doing it a couple more hopefully.”


popular
QUIZ: Guess the Premier League footballer from their Wikipedia page
The SportsJOE 12 o'clock quiz | Day 190
QUIZ: Can you name every top European football club that begins with 'L'?
SportsJOE 2000s Football Quiz | Round 1
"I remember looking at the players, in the warm-up, and Keats was just bawling crying"
Man City to sign Ruben Dias as Leeds inch closer to Bayern star
Only a true GAA expert will get full marks in our county crests quiz
You may also like
4 days ago
QUIZ: Can you beat the clock to name Ireland's record goalscorers?
5 days ago
Dr Claire Molloy returns from sabbatical to boost Ireland's Six Nations hopes
5 days ago
Will Ireland's best scrum-half please stand up?
6 days ago
The Ireland XV we would start against Italy
1 week ago
"We'll have to be 10 times better than we were against Ulster" - Robin McBryde
1 week ago
Anthony Stokes has Livingston contract terminated after Astro Turf struggles
Next Page