This surfaced on the 2017 Lions Tour to New Zealand but it is being overplayed this time around.

Ever since suffered a shoulder injury, which ended up affecting his neck, Conor Murray has been dealing with increased scrutiny to his game. From 2011 to 2018, Murray took to Test rugby effortlessly and has been arguably Ireland's best player, in terms of consistency, for the past five years.

Murray's neck issues have kept him out for 10 weeks and 16 weeks, in 2017 and 2018 respectively, and he admitted before that Lions Tour that his passing power had diminished. It was a matter of allowing his body to heal, seeking the right advice and trusting that the bite would return to his passing.

His first couple of games on the Lions tour saw him tentative in the warm-ups but dialled in once the Test Series dawned. He ended up having a fine series and was then excellent for Munster and Ireland in 2017/18. After a delayed start to this season, missing latest jaunt to Soldier Field and the Guinness Series, Murray returned to action.

This championship has not found the Limerick native at his best but part of his dip appears to be Ireland pulling back from the kick-chase game, the form of his half-back partner and the indecision that has spread throughout the squad since England came to Dublin on February 2 and proved they were human.

The form of Murray and Johnny Sexton was discussed on Baz & Andrew's House of Rugby [from 15:00 below] with both Andrew Trimble and Jenny Murphy predicting Joe Schmidt will let the pair play until it all clicks together again. 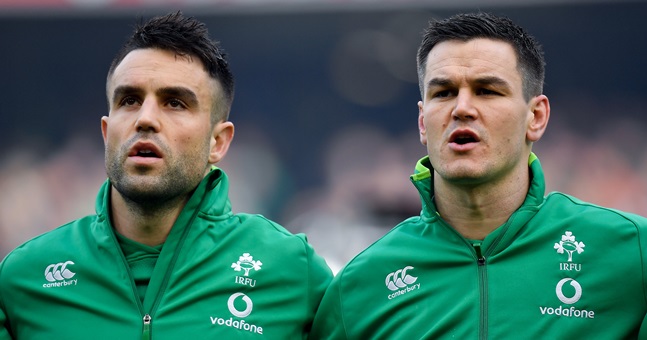 "They're still not where they were in the autumn, when they beat the All Blacks," Trimble said, "so they may be trying to play Murray and Sexton in the hopes that it all clicks again. I'm sure it is not a million miles away."

END_OF_DOCUMENT_TOKEN_TO_BE_REPLACED

Murray's passing has come under the spotlight again, as it did when he represented the Lions. When he played Crusaders, two weeks into the tour, his passing off his left hand was high-lighted as being under par. In the game, there were several examples of Murray's passing being crisp and accurate off his right-hand only to be less certain off his left.

Looking back on the 70 minutes he played against Italy, though, and Murray's passing off his left is much improved from that aberration in 2017. Sure, he slings quicker off his right but every scrumhalf will have a preferred side to pass off.

The Italy game was not his finest in the green jersey but he was a victim of the mistakes and uncertainty of those playing around him. Ireland appear to be a good side trying to remember how to get back to great.

England rattled them in week one of the Guinness Six Nations and many players that were poor in Dublin, on that night, are fighting against themselves and pushing passes; forcing plays. 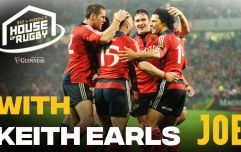 END_OF_DOCUMENT_TOKEN_TO_BE_REPLACED

Ireland started off sloppily in Italy and were blighted with errors throughout. Individual brilliance from Jacob Stockdale and Keith Earls were ultimately needed to get them over the line but Murray played his part in the second half.

His day started with a knock-on that was more down to a short Sean O'Brien pass than to poor handling:

Ireland gave Italy a number of outs in the opening 10 minutes - including that Sean Cronin overthrow at the lineout - but their scrum and a Peter O'Mahony turnover saw them work their way back into the green zone.

One of Murray's best passes of the game saw him, off his left, finding Chris Farrell on the charge with a flat, fast delivery. The Munster centre burst through the Italian line and was just held up, only for Quinn Roux to finish off the next phase.

Ireland struggled to put any consistent attacking phases together for the remainder of the half and were blessed that some poor Italian play and the lightning quick opportunism of Jacob Stockdale put them 12-3 ahead. Another Cronin overthrow and a great Jayden Hayward carry led to Edoardo Padovani's try but worse was to follow.

Italy were doing well disrupting Ireland at the breakdown and when they tried to maul. When another Irish drive went to ground, to eager Tito Tebaldi dipped to steal the ball and wrench it away from Murray, who was taken by surprise. Padovani went close in the right-hand corner but Tebaldi slung play to the left and an exposed Ireland allowed Luca Morisi in. 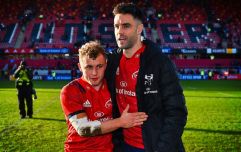 END_OF_DOCUMENT_TOKEN_TO_BE_REPLACED

16-12 down and fortunate that Tommaso Allan was missing kicks, Ireland regrouped and sought to get back to basics. 42 minutes in and, for the first time, Murray box-kicked. Andrew Conway nearly gathered but Allan was thumped back by Sexton. It was a new wrinkle for Italy's defence to ponder, and the Irish scrumhalf soon gave them another.

Murray made a lovely line break on 46 minutes and popped up an offload just perfectly for Tadhg Furlong, but the big man's handling let him down.

That dart was the first time Murray had carried. Start doing that and you take some of the focus away from the forwards ploughing contact and the backs looking for as much space possible to do damage.

On 49 minutes, after Italy had infringed at another Irish maul, ref Glen Jackson whistled for a penalty, a few phases later, to the right of the posts. Murray may have felt Ireland were on the up as he took a quick-tap even though the home defence looked well set.

He did something similar in Munster's away defeat to Castres, when the ball was turned over, but his Irish teammates - more specifically Keith Earls - got the job done. It was ponderous, back and forth stuff, but Ireland were doing what they do best... waiting for Italy to lapse, or for some individual brilliance.

Earls spotted No.6 Jimmy Tuivaiti was lying in a heap and out of action. He ran at the gap he had left and stepped Dean Budd inside before stretching to score. Sexton was not kicking any more so Murray stepped up and converted to to make it 19-16.

A second box-kick was knocked back by Jacob Stockdale to Niall Scannell and, when the Munster hooker carried a further 10 metres, Ireland had surged back into Italy's half. They were driven back by a solid Italian press and Scannell needed to act sharply when his 9 tossed him a high pass.

Compare that drifting, high pass to what Murray and do when his right arm is oiled and working well... and when his 10 is pushed further out and looking to get the ball out wide.

Murray's follow-through - like a golfer holding his stance after a swing - is often a sign he is ticking along well. We only saw flashes of that on Sunday.

Murray is well capable of slinging it at rapid speed but, the way Ireland play, Sexton is often too close to him as Ireland are happy to truck through the phases and force mistakes from their opponents. However, when Ireland are the one making mistakes, the game-plan goes to pot.

His passing power is down 10% - possibly a hangover from his neck issues - but slow ball and Ireland were playing off slow ball and, often, behind the gainline. Add that all up and the 9 does not come away looking too hot.

Murray was livid with a couple of his forwards for not tracking left sharply enough and let them have it. Whatever move he was planning was put on the backburner and his box-kick, seconds later, was too long and had no-one chasing hard. Possession gifted back.

Italy were continually piling bodies into the breakdown to slow the ball down. It worked very well for them all day but they were occasionally pinged for it. On 56 minutes, Ireland kicked a penalty for touch and the lineout was cleanly won.

Murray will be kicking himself looking back on the next moment as he got caught between reefing the ball out to pass and leaving the maul go. David Pisi caught him napping and slapped the ball back to his side. Next time there would be a rolling maul, Murray would be stronger.

Sexton had a very quiet game and was not as expansive with his running lines or passing as we have come to expect. He was tough in defence but there was a lack of spark and he may still be nursing a knock. That theory is strengthened by the Ireland outhalf not kicking for goal in the second half.

Indeed, Sexton may well have been rested had Joey Carbery been available for selection.

On 61 minutes, Ireland showed just how good they can be when they get it right. Scannell found his jumper at the back of a lineout and both Murray and Sexton passed quick and flat. Chris Farrell then showed soft hands and great timing and Earls - Ireland's best attacker - was through the gap. He gobbled up metres but the pass to Stockdale was not held (one of nine Irish handling errors on the day).

With 14 minutes left to play, Ireland caught another break. Federico Ruzza slapped down a Scannell lineout but the ball bounced out of play and gave the Ireland sub a second chance. The catch was clean, from O'Mahony, the drive was good and Murray, this time, kept a firm grasp on the ball.

All but Braam Steyn were sucked in to try stop the green drive and Murray beat him to the line with a lunging score, his ninth Guinness Six Nations try.

When Ireland needed someone to step up, Conor Murray obliged

Crucial try and two conversions in the second half#ITAvIRE pic.twitter.com/q4p9u501gu

He converted that and played defence for a few more minutes before Joe Schmidt opted to call him ashore for the final 10 minutes.

It was far from where Murray would like to be but he kept battling away and that 30 minutes after the break should give him confidence. Still, it is worth noting that John Cooney, who replaced him, had a lot more fizz in his passes in those closing stages.

Murray often lifts his game for the French and it was no surprise when, last November, Midi Olympique awarded him their World Player of the Year accolade. Ireland could do with Murray lifting it again for the visit of Les Bleus.


popular
The SportsJOE 12 o'clock quiz | Day 103
James Haskell on text exchange with Peter O'Mahony after Ireland's victory over Scotland
SportsJOE 2000s Football Quiz | Round 8
"I have more work done than any player in Ireland" - The Trevor Giles tribute show
The SportsJOE 12 o'clock quiz | Day 102
"The academy boys have turned into small monsters over the past few weeks" - Peter O'Mahony
Can you name the first clubs these players went to after leaving Liverpool?
You may also like
4 days ago
QUIZ: How well do you know Paul McGrath's football career?
4 days ago
"I'm so proud of the opportunities Ireland gave me and of the woman I am today" - Linda Djougang
5 days ago
"As a team, we’re ready to take a trophy home now" - Craig Casey
1 week ago
The brutal training drill every rugby pro has to get through this week
2 weeks ago
Baz & Andrew's House of Rugby - Dave Kilcoyne on his big Munster break
3 weeks ago
Baz & Andrew's House of Rugby - James Hook and the helpful Garda
Next Page