If eagle-eyed rugby supporters and a Kiwi journalist have spotted it, you can be sure as anything that the All Blacks have too.

Conor Murray played his first game of the 2017 Lions Tour in a hard-fought victory over Crusaders, in Christchurch, and he had a cracker.

More importantly, he brought an extra attacking impetus and upped the Lions tempo.

His 82-minute outing, playing on through the pain of a dislocated finger, was enough to catapult him into the Test picture and had All Blacks legend Justin Marshall raving.

Despite that, there were a couple of laboured passes that had the Lions under the pump. Kiwi rugby writer Mark Reason believes it could relate to the stinger injury Murray picked up against Wales on March 10.

It was a blow that saw the scrum-half miss a handful of important Munster and Ireland games, with full power slow to return to his left arm. In his Stuff column, Reason writes:

'The biggest bother for the Lions was Murray's passing off his left hand. On three separate occasions in the first half he gave the ball back to the Crusaders with awful passes. It may be a legacy of the shoulder injury Murray suffered towards the end of the Six Nations, but the Lions need to sort it out quickly.

'Murray is now probably the best kicking and defensive halfback in the world, but the Lions cannot afford him to pass as poorly as this. On a night when there were so many positives for Gatland, it will probably be his biggest area of concern.' 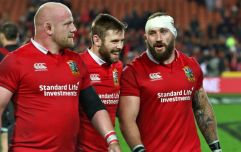 END_OF_DOCUMENT_TOKEN_TO_BE_REPLACED

We did notice that a couple of Murray's passes were loose during an otherwise assured performance but, looking back on the game, there is a clear difference in speed off his right hand [faster, accurate] than his left.

We had initially blamed Furlong for his seventh minute fumble that had the Lions back-pedalling but on further viewings, Murray's delivery is slow enough. The Leinster prop has two Crusaders within inches of him as the pass arrives and the error is forced:

Elsewhere in the game, there were several examples of Murray's passing being crisp and accurate off his right-hand only to be less certain off his left.

This was Murray's first game of the tour and the tempo would have been a lot higher than in any training sessions he has had to date.

Most scrum-halves, despite what they will say, will have a favoured side to sling passes from but there was a marked quality difference between Murray's right/left.

The All Blacks management will be studying Murray closely in the coming matches - he is most likely to start against the Maori All Blacks on Saturday - and they will be interested to see how his passing game goes.

If Murray's passes off his left remain in that 80-90% region, expect them to place a lot of their kicks to force the Lions to go left to right across the pitch, and expect the pressure to intensify whenever Murray looks to be teeing up a pass off his left.


popular
Kilkenny youngster pulls off the no-look hand-pass once more
"Conor Murray was hung out to dry"
Guinness Pro14 preview: Leinster v Glasgow
Jarlath Burns: The club man going to the top so he can bring it all back
"Ireland don't ever do anything different and that's the worry" - Mike Tindall
ROG hits the nail on the head assessing Ireland's performance
"I want the lads to realise there's only a certain amount of time, 'let's make the best of this'"
You may also like
1 year ago
James Haskell's first Lions Tour encounter with Tadhg Furlong was certainly unforgettable
1 year ago
Garry Ringrose only needed two games to expose regrettable Warren Gatland decision
2 years ago
Warren Gatland reveals concerns about Fields of Athenry before Lions Tour
2 years ago
Ben Te'o was rightly livid after some sneaky jersey swapping on the Lions Tour
2 years ago
Two Ireland stars included in French outlet's Team of the Year
2 years ago
2017 ended the debate about Johnny Sexton being Ireland's greatest outhalf
Next Page