Connacht blew a great position to secure a famous away win over Stade Francais, as Wayne Barnes made his presence felt. Tolu Latu will be the only Stade player not thanking the English referee.

At two crucial moments in the game, the Australian hooker lost his head - with a poor hit and some back-chat to referee Barnes - and it cost Stade Francais dearly.

END_OF_DOCUMENT_TOKEN_TO_BE_REPLACED

The visitors got off to a great start when Alex Wootton received the ball, out wide on the left wing, and cut inside to score. Jack Carty would have appreciated Wootton scoring closer to the posts, and he repaid the favour by slotting the conversion.

Stade, who needed to win to reach the knock-out stages, tagged back three points through Nicholas Sanchez and were soon in the lead when Adrien Lapegue powered over for a try.

Carty levelled the scores at 10-10 and Connacht then got a let-off when a Stade try was, quite rightly, chalked off for foul play. Tolu Latu came in from the side, at a breakdown, and went with his shoulder into the ribs of Shane Delahunt. Latu yellow-carded for his costly transgression.

Connacht took advantage of the man advantage, late in the half, as Caolin Blade sniped over in the corner and Carty converted to leave the westerners 17-10 up at half-time. 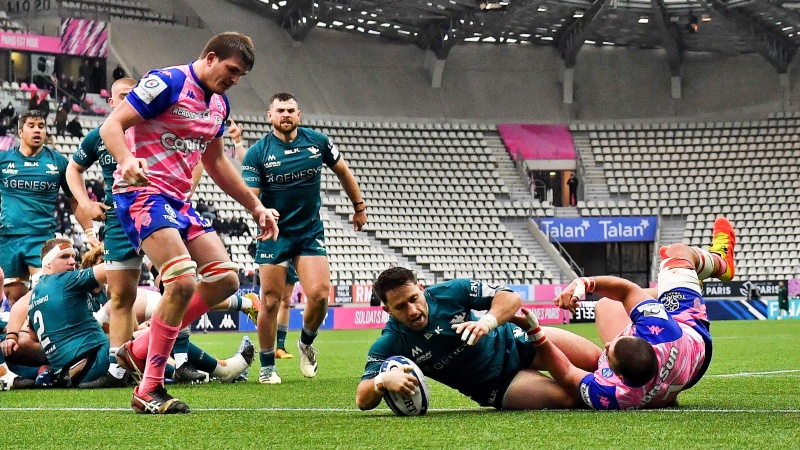 "He was speaking French!"

Connacht had already secured qualification to the knock-out stages of the European Cup for the first time, but they could secure a handy seeding with a win in Paris.

END_OF_DOCUMENT_TOKEN_TO_BE_REPLACED

Their confidence would have taken a hit, 90 seconds into the second half, as Ngani Laumape cruised over after 14-man Stade ran from deep and were rewarded for their bravery. Sanchez missed the conversion so Connacht still led by two.

Then came a second moment of madness from Tolu Latu. The hooker was not long back on the pitch, after his yellow card, when he lost the run of himself when a breakdown call went against him.

With Wayne Barnes reaching for his pocket to produce another yellow - making it a red card - Latu's captain desperately claimed he was speaking French. Barnes had heard the insults, crystal clear. The referee explained: 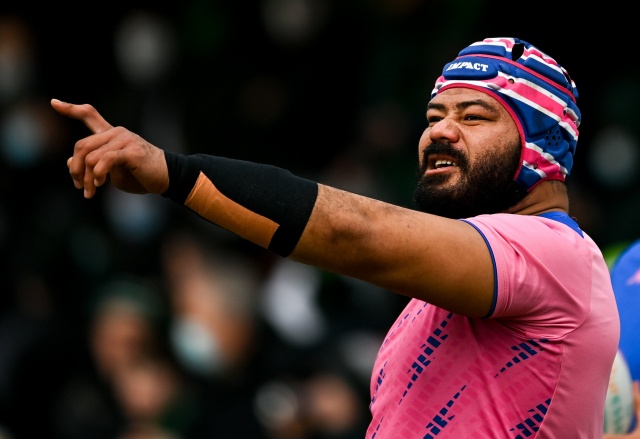 Tolu Latu of Stade Francais was red-carded by Wayne Barnes after 47 minutes. (Photo by Harry Murphy/Sportsfile)

Minutes after the Tolu Latu sending off, Connacht put the ball through the hands and Tom Farrell, who had a fine game, got over for a try that put the visitors nine points clear.

There was still 30 minutes left in the match and Stade responded, again, through Kylan Hamdaoui. Sanchez missed the conversion extras and Connacht led by four as we headed into the final quarter.

Just after the hour mark and another Connacht foray into the Stade half saw multiple forwards and backs linking up with tidy passes to punch through. Jarrad Butler received the final pass and flopped over the tryline under the posts, making for an easy Carty conversion.

You know you're in trouble when you see a wall of green shrits running towards you 😳@connachtrugby work the ball across the line excellently once again, Conor Oliver and Jarrad Butler have a little one-two and make it look oh so easy 😌#HeinekenChampionsCup pic.twitter.com/eMHMTxNsUB

Going for broke now, Stade let rip and scored their fourth try of the match through flanker Ryan Chapuis. If that was not nervy enough for Connacht, Conor Oliver was then sin-binned, on 69 minutes. It was 14 vs. 14 for the final stages.

The hosts had their tails up, by now, and Connacht were clinging on, and conceding penalties at a rapid rate. You sensed it was only a matter of time, and so it proved when Adrien Lapegue got over for his second try. It was converted and the French side now led by three points.

Stade needed to win by six clear points to make the knock-out stages and Connacht were pushing for a positive result too. It made for a wild, wild finish as both sides emptied the tank, and then some.

Barnes awarded Stade two penalties in the final two minutes. The first was missed but Barnes immediately whistled in their favour and Joris Segonds, from much closer to the posts, put his side through to the Last 16.

Our Man of the Match: Jarrad Butler (Connacht)